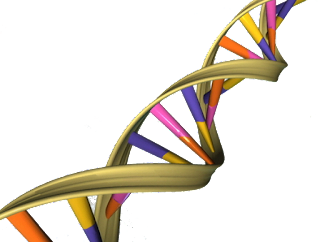 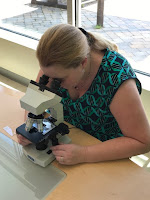 This week I got to re-visit my former career as a research microbiologist and introduce kids to molecular biology with a crude DNA extraction experiment. DNA extraction is something I used to do routinely in my work which involved sequencing, cloning, and engineering DNA as a part of HIV research and vaccine development in my previous life.

While the procedures I used were a little bit more complicated and required sterile conditions in order to have DNA of the purity required for further use and analysis, this procedure is simple, uses ordinary household materials, and yields impressive amounts of DNA due to the unique octoploid nature of commercially-grown stawberries. As a result of hydbridization, this variety of strawberry has eight copies of each chromosome, rather that the usual two. I combined this experiment with a simple DNA model construction activity, viewing strawberry cells, stained human chromosomes, and our extracted DNA under the microscope, as well as extension activities to try later in the classroom or at home.

I began with a very brief explanation of what DNA was and how the 4 bases create 3-letter "words" and that this code controls everything that goes on in the cell, and thus your body, much like code controls what a computer does. I also showed a diagram of the cell, explaining how the DNA is inside the nucleus, and that we were going to use detergent to break down the lipid cell & nuclear membranes to release the DNA, and then precipitate it with alcohol so that we could see it.

Recommended Group Size: No more than 20

Time: 1-1/4 hour for all activities (allow more time for a larger group)

Budget: TBD, but low if you disregard the microscope & prepared slides 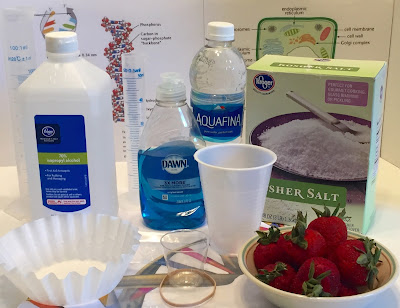 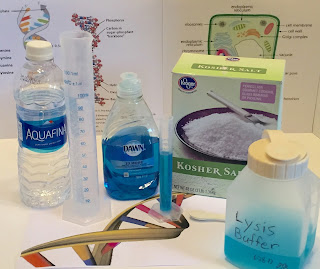 2. Place 1 large strawberry (or 2 small-medium) in a zip-lock bag, squeeze all the air out and seal. Then start squishing the strawberry with your hands and fingers until no large chunks remain. 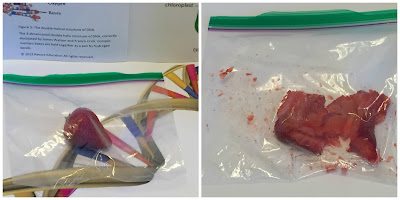 3. Add 15 ml (or 1 Tbsp) of the Lysis Buffer (we pre-measured it and gave it to them in small cups) to the smashed strawberry in bag and mix gently; do not create foam. Let sit for 2-3 minutes.

3. Meanwhile, prepare the cup and filter. Push the coffee filter partially into the cup, folding the top inch or so over the side and securing with a rubber band. Then pour contents of zip-lock bag into the filter and let drip for 15-20 minutes. [It may need a little "help" by VERY gently stirring with a plastic spoon, but you must be very careful not to tear or puncture the filter!] 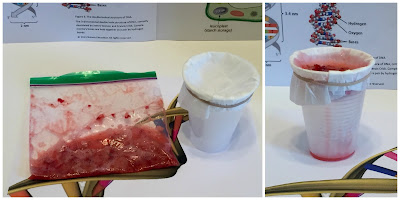 4. Once you have enough liquid to cover the bottom of the cup, carefully remove and discard the filter and remaining contents. This is the step we had the most accidents as the kids would tip the cups over or spill the contents of the filter. The remaining liquid is your filtrate. Optional (but recommended): transfer filtrate to a smaller, clear container for better observation. 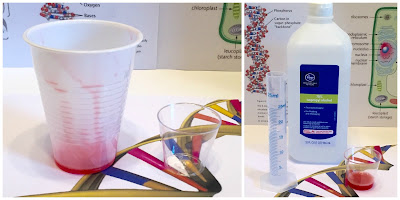 5. Measure out 10-15 ml (1 Tbsp) of alcohol and carefully pour down the side of the cup so that it forms a separate layer on top of the filtrate, and observe over the next 10 minutes or so as the DNA comes out of solution and is pulled into the alcohol layer as it precipitates. (We measure the alcohol and helped them pour it properly.) Remind the kids not to breathe directly over the cup once the alcohol has been added.

6. At first, a cloudy layer and a few tiny bubbles will form at the interface of the alcohol and filtrate, then as the DNA precipitates, it floats higher up in the alcohol layer and pulls more DNA filaments with it. It first appears as a somewhat gelatinous stringy mass.

7. As the DNA preciptates, it become white, condenses, and floats towards the top of the alcohol layer and is very visible. If desired, spool out some of the DNA with a stirrer or skewer. You can make a wet mount and look at it under the microscope, but there really isn't much to see, especially without a stain; it will just look like a clear, beige stringy mass. 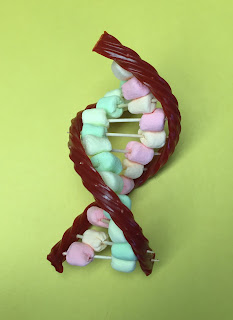 While we were waiting for the strawberry mush to filter, we moved to another table and made models of DNA using Twizzlers, mini-marshmallows in 4 different colors, and toothpicks. The Twizzlers represent the ribophosphate backbone, or sides of the ladder, and each color of marshmallow represents one of the bases that make up the rungs: adenine, thymine, cytosine, and guanine. Remember to designate which base each color of marshmallow corresponds to, and that A always pairs with T, and G always pairs with C on the rungs.

As they worked on the models, I talked a little more about how the 4 bases made up the genetic code, in 3-letter words called codons, and that these "words" are what tell the cell what to do and determine all of our physical characteristics. First they constructed the ladder, then simply grabbed each end and twisted to form the double helix. It does not hold the twist very long, however. We gave them zip-lock bags to put them in to take home. 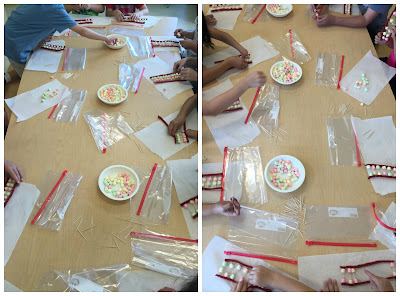 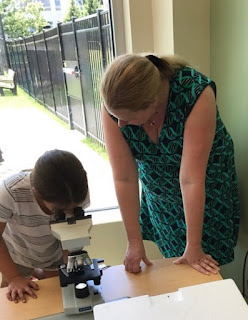 We also introduced them to the microscope. I sliced a very thin sliver of a strawberry and mounted it on a slide so that they could see the strawberry cells. These are unstained, so many of the organelles are not visible, but if you look closely you can see the nucleus (where the DNA is contained) and vacuoles. I also bought a prepared slide of stained animal (not sure if it's human or not) cells, showing one with an intact nucleus next to one that is getting ready to divide. The nucleus has broken down and the DNA condensed into chromosomes, which are visible when stained (the photo is blurry because it is very hard to take a picture through the microscope with a phone! 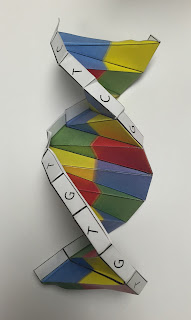 I had originally planned to have them do this origami DNA model that was developed by Dr. Alex Bateman, one of the researchers at the Sanger Institute, because I thought it turned out really well and wasn't that difficult (and I generally don't have the patience for origami). But, in the end we decided it might be too hard for kids to do, and substituted the candy model instead, which we knew they could do and knew they would enjoy.

So, I sent the origami home with them instead. It comes in two versions, one already colored in with corresponding bases, or a blank one to color yourself, plus instructions. Links to the files are below:
There is also a video corresponding to the folding directions above by Dr. Bateman:

And another that shows a slightly different approach to doing the same thing (ignore the inaccurate rainbow coloration). It is in Spanish, but you really don't need the narrative, just watch the video:


I also gave them the written protocol for the extraction experiment so they could repeat it at home, with suggestions to try other soft fruits and compare the DNA yield to that of the strawberries [Spoiler: it will be less].

I was excited for this program, and having a chance to put my previous degree & career to use, and just hoped the kids would enjoy it. I imagine that much of the information about DNA was a little over their heads, but hopefully at least introducing them to it will make it easier for them to learn later. I wasn't sure if they were at all familiar with DNA yet, so I tested them by telling them my dress would give them a clue as to what our experiment was about. To my surprise, a couple of them did recognize the DNA pattern (yes, I was channeling Miss Frizzle!).

They did really seem to like it. You mix things together and something happens, and even if you don't quite understand everything going on, it is still cool to watch. Several of them wanted to know if they could touch their DNA after they spooled it out, though others were a little squeamish about it. The yield they got from this batch of strawberries was particularly high and quite impressive! Even my boss, who is not a science person, thought it was cool.

We had 11 kids between the ages of 6 and 10 (this would be even better for a slightly older group). Of course they loved making the candy model of DNA, and though they weren't allowed to eat any of the candy there (this facility has extremely strict rules about food being healthy, organic, and locally sourced), they were allowed to take it home and let their parents decide if they could eat it.

Some were really interested in looking through the microscope, and others couldn't quite get the hang of it, but again, it was a good introduction (and a brand new toy for me, courtesy of my awesome manager). Now I need to come up with some other programs to make use of my new toy. I'm thinking something along the lines of The Fungus Among Us, Life In A Pond, Germs & Hygiene....Blood looks really cool under the microscope, but I'm not sure how to incorporate that into a program yet.