This is a very difficult post to write, and I had hoped to be making a completely different kind of announcement at this point. I certainly never expected to be saying this, but after working seven years in the same library system, working my way up, investing lots of my own time and money into professional development, earning my MLIS, and trying to build a career, I am suddenly unemployed due to Covid-19 layoffs, and I am devastated.

While I do understand the necessity of reducing staff due to still being closed,and all the restrictions that will be in place when we they finally reopen, the way they did it added insult to injury. All throughout this crisis, I've been singing my system's praises to everyone for how well they have handled it, and put staff and community safety first, being one of the first libraries in the state to close, continuing to pay staff, and staying closed longer; holding it up as an example to others. There never was any hint they were considering mass lay-offs. I greatly appreciate that they paid us for that long, but frankly, I would rather have been furloughed and still have a job to come back to eventually than paid for a while, then fired. Yeah, they call it a lay-off, but that's just semantics. Either way, I'm out of a job.

The way we all learned we were being let go showed a complete lack of compassion and respect. There was no warning, and we never saw it coming. Rather than letting the supervisors or managers who actually work with us and know us tell us individually, it was sent out in a mass generic e-mail that at first appeared to be just a normal update, starting out talking about starting curbside service and opening one branch, then it was basically, "and oh, by the way, all you part-time people are now unemployed", and sent out at the end of the day of course, so no one can respond. That's just cold and cowardly. To further rub salt in the wound, we were also told none of us would be called back, but we would have to reapply down the road and start all over, competing for a position and starting at base pay.

I am absolutely devastated and incredibly hurt. Hurt by the way it was handled and devastated by the loss of a job I loved and the career I thought I was building. Though I liked every position I've had in the system and worked with so many great people and learned so much in each one, my most recent position was the one I really and truly loved. I worked with great people, I got to do a wide variety of programs, I loved our patrons and the diverse community. I enjoyed being at work and looked forward to going to work every day. I am just in tears thinking about all of the patrons that I had built relationships with that I'm not going to see again, some of the coworkers I'll probably never see again, some that I'll probably lose touch with even though we say we won't, it's just not the same when you aren't working together anymore. I know the pandemic is ultimately to blame for the situation, but the director and board bear the blame for how it was handled.

So if you're a director or board member reading this, your take-away should be to never, ever forget your decisions have major impact on people's lives. Never forget your employees are human beings, and remember to treat them with compassion and grace, especially when difficult decisions have to be made. Even though it would be easier on you to just send out an e-mail; you need to share that emotional burden and do it in a more personal way. Take time to look at all those names of people whose worlds you are about to turn upside down. Think about who they are, what they've done for the library.  And if you can't picture them or answer that question, you need to do some serious soul-searching about what kind of director you want to be. If you don't know the employee, then let the manager or supervisor who does deliver the news, someone who sees a human being, not a disposable cog, and can be truly empathetic and compassionate.

To my former director and board, you've done some really great things with the library and for the community, and you handled the initial crisis extremely well. However, you really handled this very poorly. I hope the library can recover from the loss of so many great, knowledgeable and experienced people; I hope my career can survive this major setback. I can almost guarantee that when you see my name you have no idea who I am or the things I've done for the library and community. Even if you have a vague idea, I'm sure you don't really know me. Here are some things I want you to know about me before you show me the door:

I am one of the most dependable, dedicated part-time workers you had. I loved my job, and I am very passionate about public libraries and youth services. I just finished my MLIS, which is actually my second masters degree. My first was in microbiology, and my first career was in research. I did work for Dr. Tony Fauci in fact. I grew up on a farm after being a navy brat. I also worked for the navy as a civilian researcher. I was an award-winning professional cake decorator. I once coached a state-champion track team. I just had a paper about my MLIS research project accepted for publication in a scholarly journal. Losing my job is going to mean major upheaval for my family. I love animals and nature. I never outgrew my fascination with dinosaurs. I have presented close to 2000 storytimes in the last 5 years. I serve on the board of my local public library, and though we also had to make the difficult decision to lay-off part-time employees, we gave them 30 days notice and every one of them got a personal phone call (and they will be called back at their same pay, in order of seniority). I will be a great children's librarian for some other library. I am a living, breathing, human being with skills, hopes, dreams, responsibilities, and feelings.

To my former supervisors and managers, you guys were all awesome to work for, and I learned so much from each and every one of you, and I am so glad I had the opportunity to work with you all. My co-workers are all amazing people, and I will miss you all so much. The library is a great library because of all of you! And to my library kiddos and families, I am sitting here with tears streaming down my face, looking at all the little treasures you've given me over the years, thinking of how I will not get to see your smiling faces, receive your pretend cakes and cups of tea, see the look of wonder on your faces when we do cool experiments, hear you laugh when I read a silly story, or help you find just the right book again. And worst of all, I didn't even get to say good-bye. 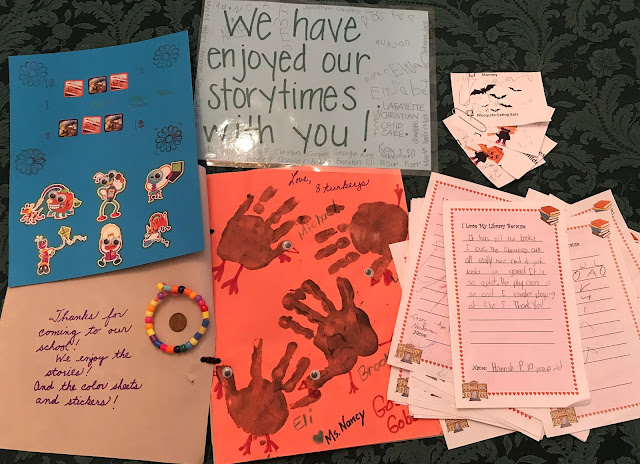 My treasures, clockwise from the top left:

To all the other library people who have also been left unemployed, the other recent grads facing a near hopeless job market, I see you and I feel your pain.

And to the corona virus, screw you! Just. Screw. You.

Email ThisBlogThis!Share to TwitterShare to FacebookShare to Pinterest
Labels: About me