Adventures In Storytime Has Gone Virtual! 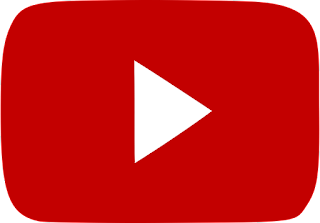 After the Covid-19 pandemic hit I was suddenly and unexpectedly unemployed and faced with the dilemma of how to stay connected to the field, not get stale, come up with new content for the blog, and show potential employers I can adapt to virtual programming. While in library school I found I liked putting together presentations, so I recycled slides from previous in-person training sessions I'd done on literacy topics and recorded voice-over to them to turn them into webinars, but there hasn't been any interest (I think everyone's webinar-ed out by now) so I haven't pursued making any others yet, though I do plan to do some shorter tutorials..

Now that it is apparent to almost everyone that it will be quite some time before we are back to in-person programming, and virtual programming and other alternatives are here to stay, I needed to figure out a way to get experience and demonstrate that I could do virtual programs. But, there was one catch. While publishers have extended permissions to teachers and librarians, since I am not currently attached to a school or library, they don't really apply to me. One might argue "fair use", but I'd rather play it safe. So after thinking it over for a while I decided instead of doing storytimes, I would do short videos with a few songs, rhymes, and/or fingerplays around a given theme, and then give some book suggestions at the end.

I've set up a YouTube channel, and I will also be posting them on the Facebook page. I'm trying to make them serve a dual purpose, to be suitable for kids to watch and sing and play along with, as well as to be a resource for parents, educators, and other youth librarians. I'm also going to do occasional crafts, STEM, and booktalk/trailer videos as well. I'm trying to keep them around 10-15 minutes or less, but a couple have creeped up closer to 20. So far I've only uploaded a few videos, plus a video I made last year from my library butterfly project, but my goal is to add one every week for a while. I don't know if anybody will watch them, but at least it will be good practice for me.

If you have any feedback or suggestions, I'd greatly appreciate it! I'm still not 100% comfortable in front of the camera, but getting better. It's just so much harder without a live audience in front of you, plus the only place in my house with decent lighting is very cramped.

Email ThisBlogThis!Share to TwitterShare to FacebookShare to Pinterest
Labels: Announcements 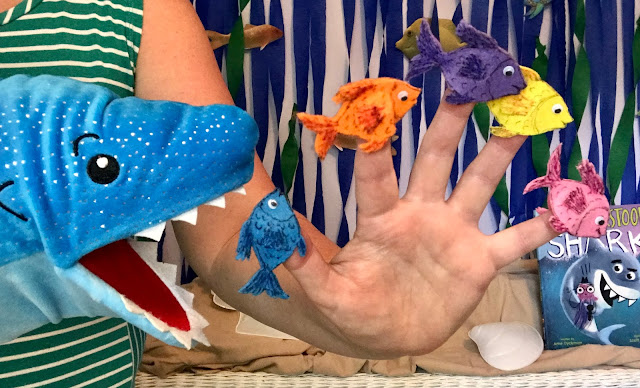 So today's Flannel Friday post isn't exactly a flannel board set, but it is based on the one below I made previously, and did make use of felt. 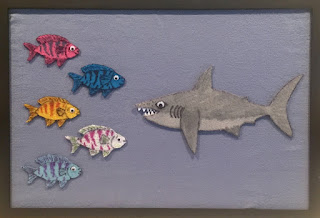 I previously made this flannel board set to do a couple of different "Five Little Fishies" rhymes, including one where they were teasing Mr. Shark. But then last summer a co-worker showed me how she did it using our shark puppet and finger-puppet fish, and I thought that was a much more fun way of doing it! So this year I bought myself a shark puppet and make some little fish finger-puppets from felt. 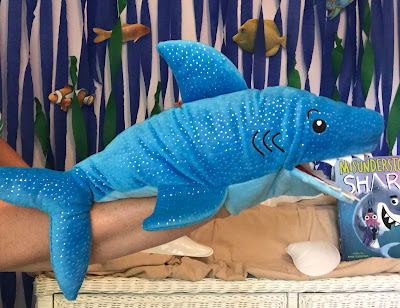 I couldn't find a Folkmanis puppet like the library has that I could get as soon as I wanted, and ended up buying a different one that I don't like it quite as much because I think the color and shape are more suggestive of a dolphin, but it does clearly have shark teeth and works well. 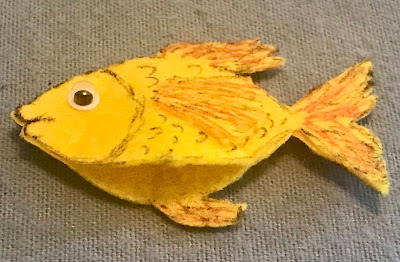 To make the little fishy finger-puppets I just found a piece of clip-art to use as a pattern and sized it to what I thought was the appropriate size. Then I cut out two pieces from each of five different colors, added a little detail with colored sharpies and googly-eyes, then glued them together, leaving a finger-sized opening at the bottom. Mine turned out to be just a little on the small side, so I would advise making them just a bit bigger so that the pocket for your finger is a little deeper. Mine work, but I have to be careful or they will fall off my fingers easily. 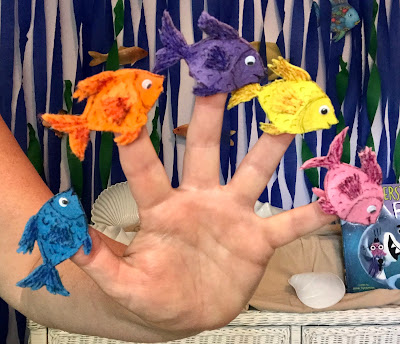 Here is the rhyme I use them with:

Five little fishies, swimming in the sea.
Teasing Mr. Shark, "You can't catch me!"
Along comes Mr. Shark, as quiet as can be,
And SNAPPED that fishy right out of the sea!
(grab one fish with shark puppet)

No little fishies, swimming in the sea.
Just Mr. Shark, as full as can be! 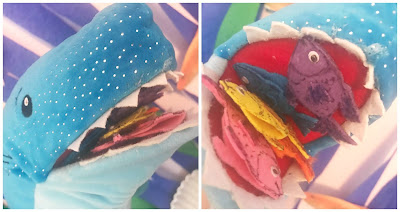 And if you'd like to see it in action, it's the second activity in my Shark Week-themed video below: