Reading with My Peeps - Diorama Contest 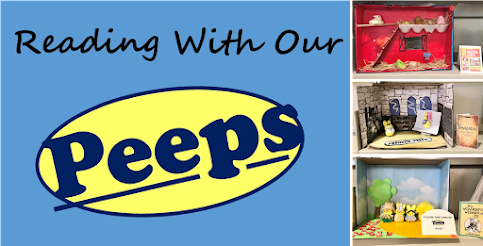 Over the last few years I had noticed a growing trend to make dioramas using Peeps. Love them or hate them, there is no denying the little sugar bombs are adorably cute, especially when portraying your favorite characters. Once I had seen them, I knew I wanted to host a library event some day, and this year I had my chance. 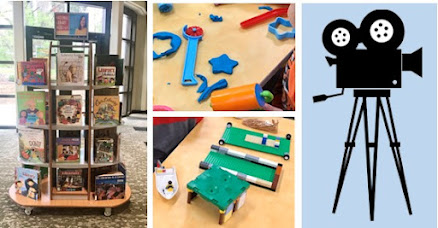 Initially I wasn't planning on doing anything during Spring Break other than my usual storytime (which I had just resumed the week prior) and self-directed activities because I was told that everyone travels and it's always been dead at the library during spring break, and I *really* needed to work on planning summer reading. But, with high gas prices and all the problems with airline cancellations, I thought more people would be staying home than usual, and with the cold, wet weather expected most of the week they would need something to do.

So I decided to plan some very simple family programs that (1) would not cost a lot, (2) would not involve a lot of preparation, (3) would not involve a lot of staff time during the event, (4) most supplies purchased could be saved and reused, and (5) would work for a fairly large age-range; basically programs that could easily accommodate a crowd, but wouldn't be a waste of time and materials if no one showed up. Since it was also Library Week, I incorporated that theme in some of them. Here is what I came up with:

My director wanted to make a big deal out of National Library Week, partly to acknowledge the staff for all the hard work they do, partly to remind people of all the library does for the community, and partly to get more people coming back in. So I planned for a "Library" themed storytime, which is always fun because there are several funny and cute books about libraries for kids.

This was my first in-person storytime after having to suspend in-person programming yet again as the Omicron wave hit right after I started this position. Patrons have been asking for it for at least a month, but Covid numbers were still too high for me to feel comfortable. During the interim I offered book bundles and did a couple of read-alouds on our Facebook page.