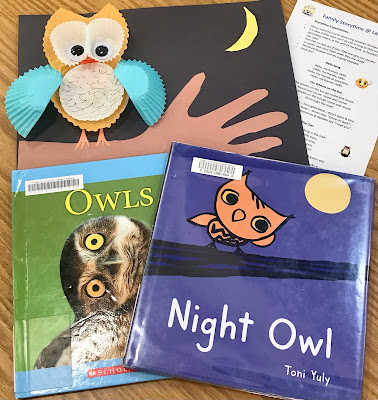 During the summer one of our programs for elementary aged kids was a virtual visit with the director of the local raptor rescue and rehab center and their resident barn owl, with take-home owl pellet dissection kits, so I decided to make that week's storytime owl-themed as well.
As usual I started with a hello song, followed by that month's warm-up song (Wheels On The Bus). Then I introduced the topic with the following rhyme, pausing after each line to let them guess what it was about:
"The Owl"
There's something in the tree,
With big, wide eyes,
And a pointed nose,
Two pointed ears,
And claws for toes.
[pause and see if they have a guess yet]
When he sits up in the tree and looks at you,
He flaps his wings, and he says "Whooo? Whooo?"

I followed with the non-fiction book Owls Josh Gregory to show some pictures of different types of owls and share some interesting facts.

Then I segued to our lead-in song and first book by saying, "Now that we've learned some information about owls, how about some stories about owls?" 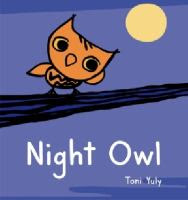 Following the lead-in song (If You're Ready for a Story), I read Toni Yuly's Night Owl. This is a great book for younger audiences because it is relatively short with very little text on each page, and bold, simple illustrations.

We then worked on color recognition with Tim Hopgood's Wow! Said the Owl. In this story we have a curious little owl who wonders what the world is like during the daytime when he is usually asleep. So he decides to stay awake to see, and finds a world bursting in all the colors of the rainbow.

This is also fairly short and sweet, with bright illustrations, and provides not only the opportunity to identify colors, but also to discuss the word "nocturnal".
After that I passed out the take-home craft kits and we sang a good-bye song.
Take-Home Craft 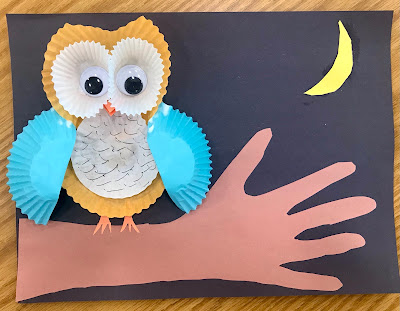 I'm typically not a big fan of storytime crafts, but I did think this one was really cute. I like the dimension that being multi-media and using the cupcake liners gives it, and personalizing it by tracing around the child's hand and forearm for the tree branch.

I gave them each one sheet of black paper, one sheet of brown, small scraps of yellow and orange, 4 large colored cupcake liners, 3 small white cupcake liners, and two large googly-eyes.
How It Went
Kids seem to like owls and enjoy pretending to be them, as this theme has always gone over really well. I was very disappointed that this library system did not have a single copy of Waddell's Owl Babies! That is such a great, fun read aloud, and I had my heart set on using it, and couldn't believe we didn't have it.
Apparently, several years ago there was a very misguided purge of all older books from the collection by someone who didn't understand the value and continued relevance of some of the classics and award-winners, and in particular had no knowledge or understanding of children's literature. I am certainly not one to hang onto books that don't circulate or aren't in good condition, but there are some classics that are timeless and I would expect most libraries to have. It's really unfortunate, because numerous books that were great for storytime were lost, as well as other classics and award-winners that are still relevant and will circulate.

It's become apparent to me over the years that many librarians, even MLIS-degreed librarians, do not have a good understanding of the principles and practices of collection maintenance and development, and either never get rid of anything, or purge based on a single criterion or report, without laying eyes on the book, considering all factors, and using some professional judgement. It amazes and frustrates me that there are many MLIS (or equivalent) programs that do not require collection development courses, and I'm very glad that I took one and had an excellent instructor. I will soon be putting that knowledge into practice in a new position where I will be responsible for not only the maintenance of the children's collection, but the selection of all youth materials (which is a little intimidating!).
Posted by Jen at 12:13:00 PM No comments: 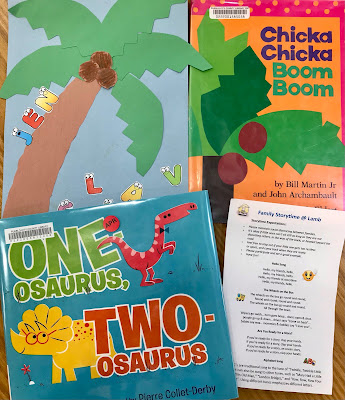 I did this storytime back in August, but just now got around to writing it up. I haven't been writing up every storytime anymore because (1) I just don't have the time, and (2) at this point in my career I have done so many that it's becoming repetitive. So now I just write them up if it was a theme I haven't already covered multiple times, or I used new books I want to highlight.
I started out with a brief "Hello" song, introductions and expectations, and then did our warm-up song, which for this month was "The Wheels On The Bus". Then I settled them down for the first book with my lead-in song, "If You're Ready for a Story". 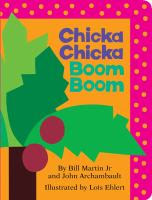 For the "ABC's" portion of our storytime I chose the classic Chicka Chicka Boom Boom by Bill Martin, Jr., John Archambault, and Lois Ehlert because it has great rhyme and rhythm for reading aloud, bright illustrations, and manages to cover all 26 letters while still being short and engaging enough to hold the kids' attention. I have found that traditional alphabet books just don't work well for storytime; no matter how cute or exciting the theme is, the kids get bored before you can get past the middle.

I normally like to use the coconut tree and letters props to have the kids help retell the story after reading it, but unfortunately this library didn't have one.
Next, we sang our ABC's, first to the traditional tune (which is the tune of "Twinkle, Twinkle Little Star"), but then I added the more challenging twist of singing it to different tunes in order to (1) emphasize different letters so that L-M-N-O-P don't always get squished together, and (2) to engage their brains differently so they are more mindful of what they are doing and saying, rather than relying on muscle memory. We tried the tunes of "Mary Had a Little Lamb", "This Old Man", and "London Bridges". I encouraged them to try this at home, and see if they can find other tunes that work, such as "Row, Row, Row Your Boat" and "Head, Shoulders, Knees, and Toes". 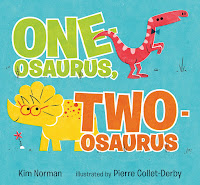 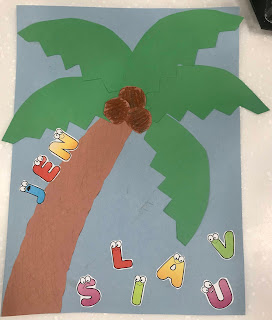 The craft was making their own coconut tree. I gave them a sheet of blue construction paper and a tree trunk, several leaves, and three coconuts already cut out to glue on.
Then I found a cute alphabet printable online, and encouraged them to use the letters however they wished, and gave two sets in case they wanted to do their name as I had and needed multiples of some letters.
I also included some kind of dinosaur counting activity sheet, but at this point I've forgotten exactly what it was and where I found it.

I really don't like doing cookie-cutter paper crafts and activity sheets, I'd prefer more open-ended activities, but due to time-constraints and having to do take-home kits this is what works best for now and people do seem to like them.
Posted by Jen at 2:33:00 PM No comments: