My director wanted to make a big deal out of National Library Week, partly to acknowledge the staff for all the hard work they do, partly to remind people of all the library does for the community, and partly to get more people coming back in. So I planned for a "Library" themed storytime, which is always fun because there are several funny and cute books about libraries for kids.

I started with a short hello song, followed by a warm-up song to get everyone moving and engaged. Then we sang the alphabet song, and I reminded them that the tune we usually use is the same tune as "Twinkle, Twinkle Little Star" but that it can be sung to other tunes as well, which is good exercise for our brains and lets us hear the letters emphasized differently so "LMNOP" aren't always squished together. 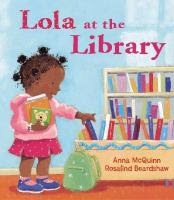 I lead in to the first book by singing "Are You Ready for a Story?", then we read Lola at the Library by Anna McQuinn and Rosalind Beardshaw. I love this simple but sweet story about Lola and her mother spending the morning together and visiting the library. It also brings some much needed diversity exposure to a community that isn't very diverse.

This book does a lovely job of describing the children's area, and as a bonus it takes place on a Tuesday, which is the day of our storytime. Normally I don't like to substitute or change the wording, but in this case I change the borrowing term and checkout process to match how it is at our library. If you're promoting reading in general rather than the library, there is also Lola Loves Stories and Lola Reads to Leo.

After that I did a simple library book rhyme with the flannel board that lets us practice counting to five, subtraction, and identifying colors. 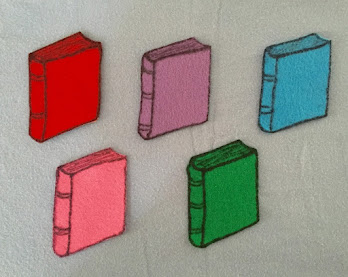 Four little books at the library.....[repeat until you get to zero]

If you have a small group, you can use the names of the children to fill in the blank, repeating the rhyme as necessary to get everyone in (or make extra books). Otherwise, fill in the blank with "a teacher", "a little boy/girl", "a big kid", "a mommy", "a daddy", etc.

At this point the younger ones were getting restless, so I got out the shaker eggs so everyone could move around and get some wiggles out. I used this modified, simpler version of a shaker song from Jbrary:

Other verses: way up high, way down low; to your left; to your right; fast, fast, fast; slow, slow, slow
Then at the end I told them to give their shakers one more really fast shake, then slow, then stop. They did a really great job of holding them still as I came around with the basket to pick them up, with only one child trying to sneak and keep theirs. There's always at least one, LOL!
I finished up with a book that wasn't new, but was new to me. If You Ever Want to Bring a Circus to the Library, Don't! by Elise Parsley is a super fun read aloud that shows all the problems with bringing the circus to the library. And just when you think everything has settled down and the protagonist Magnolia has realized that it's just not a good idea, something happens that REALLY drives the point home with disastrous but hilarious results (hilarious only because it's fiction!).

I had a lot of fun with this book, and I'm so glad someone in one of my online librarian groups suggested it, but it is a bit longish and better suited to 5-8 year olds. Since this was spring break I did have older kids in my group for a change.

By this point I was losing the youngest members of the crowd and it was running a bit longer than I'd intended, so I quickly closed with a goodbye song and moved to the craft before people started leaving.

I was running short on time, so my co-worker looked for craft ideas for me, and came across one where kids made a book. The one she found was a bit more involved than I wanted to do or had time to prep, so I just kept it very simple and open-ended. (Not only do open-ended activities encourage more creativity and problem solving, they mean less prep for me, so it's a win-win!)

I initially said they could do as many pages as they wanted, then we quickly realized I needed to amend that to as many pages as they could punch the hole through, which was about 3, though will vary depending on the paper. I also told them they could put whatever they wanted in their book, because it was theirs and *they* were the authors and illustrators. I said they could tell a story with words, with pictures, or both; they could dictate a story and have an adult help write it and then draw the pictures, they could practice letters, numbers, or shapes, or they could doodle and scribble. Whatever they wanted.
They really seemed to enjoy it, and I just loved one little boy's imagination and how what appeared to me as simple scribbling back and forth held a very detailed story for him that he was happy to tell me.

How It Went
I was very pleased to have a much larger crowd than I'd had for the few in-person storytimes I've been able to do here previously, about 25 people total verses 8-12. This was probably due to it being spring break and more parents taking off work and older kids being home from school. It was so nice to have some older kids for a change; that's really the age group I enjoy the most and do the best with for storytime, and don't see much in the library anymore. Hopefully I will be able to get some classroom visits going in the fall!

It ran a little long and the second book was too long for the littles and a few did duck out a little early. I felt a little bad for that, but at the same time I also really enjoyed reading something a bit more sophisticated for a change! But I think overall it was very successful and people were very glad to have in-person programming started again, and people are asking about summer already. I am curious to see how many people I have next week.
Posted by Jen at 7:49:00 AM