From A to Z 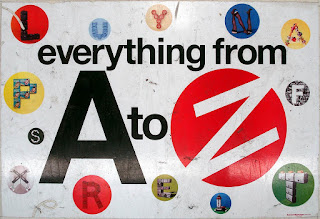 So this was the last storytime I would have with this group before they moved up to the next class (which I don't visit), so I wanted to be sure this was a particularly fun storytime. The only thing was, I had already done all my best ideas and sure hits with them! I could not decide what to do; I thought maybe a pop-up storytime with all pop-up books, zombies, old favorites, new favorites.... I just couldn't decide.

Then I found out I was going to be able to give them their summer reading prize books when I went for storytime (I had thought someone else would be), so that took the pressure off, since giving them books to keep would definitely make it a special storytime. I would also be giving the teacher a copy of Chicka Chicka Boom Boom *and* the activity tree to go with it. I started thinking maybe it would be a good idea to go ahead and read Chicka Chicka Boom Boom and model how to use the tree with it, to make it more likely they would actually use it in the classroom. I had that and a handful of other books I liked and figured I'd just go with what felt right at the time.

In the morning, I had an epiphany. One of the books I had was a really cute zombie book I had in mind when considering a zombie theme that didn't quite pan out. "Zombie" starts with Z, and Chicka Chicka Boom Boom covers the whole alphabet, so all I needed was an "A" book to start with, and I had an "A to Z" theme! Luckily, I had something handy at home that would work.

After we did our welcome song, a brief introduction, and our story song, we read our "A" book, Ten Apples Up On Top! by Dr. Seuss (as Theo LeSieg), which I luckily had in my personal collection at home.

In addition to featuring apples, this book is fun, and let us work on our counting as well. Because at 60+ pages these early readers are a bit too long for the time frame I had and for the attention span of the typical 3-4 year old, I greatly shortened the ending, by skipping from page 38 to page 58 (and the kids were none the wiser). The kids were impressed with the characters' apple-balancing skills.

After singing the "Alphabet Song", I read Bill Martin, Jr. and John Archambault's classic Chicka Chicka Boom Boom, which as it turns out all the kids were familiar with and were excited about doing. This book is fun, with a nice rhythm, and is great for focusing on the lowercase letters. Then, I pulled out the activity tree (purchased from Lakeshore) and put the letters on in order, letting the kids name them when they could, and pointing out the letters starting their names. 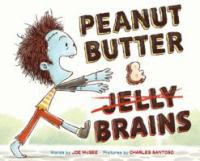 That brought us to the last letter of the alphabet, and our Zombie story, Peanut Butter & Jelly Brains by Joe McGee and Charles Santoso. This is a cute, non-scary zombie story about Reginald, a zombie boy who is not like other zombies, because he craves PB&J instead of brains.

Eventually, he gets one and shares with the other zombies, and they all find they like it better than brains, so now they can live in peace with the townspeople.

How It Went
This was one of the most rewarding storytimes ever!

Not only did it all come together so nicely without a lot of effort, I got to give them stuff!

When I first came in, the kids noticed the tree sticking out of my bag, but couldn't tell what it was because it was still in the package and starting asking me about it right away. Then, when I later pulled it out, they recognized it as being the one in the book immediately, and were really impressed and thought it was so cool. As I was putting the letters on it, I noticed the teacher taking pictures because she thought it was so neat.

After I read the last story, I asked them all if they liked the coconut tree, and all the kids and teachers commented on it. Then I got to say, "Well, guess what! It's yours, for Miss Angie to keep in the classroom and use anytime she wants!" They were all excited about that, saying thank you, and talking about how they couldn't wait to play with it.

Then, I got to say "And that's not all...." (I felt like I was hosting "The Price Is Right"!) and told them in addition to that, they were each going to get a book of their very own to keep and take home! I spread all the books out I had brought and brought them up two at a time for me and the teacher to help them select one. I always get a kick out of seeing how some of them are so decisive and walk right up and know which one they want, while others take forever, and change their minds several times. The teacher chose some for the kids who weren't there, and I gave her a couple of others to keep for the classroom as well.

It was so rewarding to see the excitement and appreciation for books from both the kids and the teachers, and to see that the teachers would likely make use of the activity tree. I'm so glad I was able to give them to the class; I love playing Santa!  Or should I say Bob Barker?

It was a little bittersweet, as I won't get to see most of these kids again. It seems like by the time I finally learn all their names and they've developed good storytime habits, it's time for them to move up to the next class.