A Long Day of Conference-ing 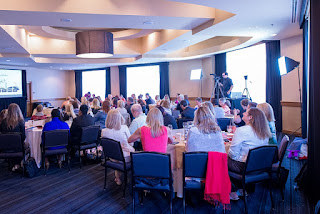 Today I attended my first official library-related conference; a small, local youth literature conference hosted by the LIS program at the local university. Though I've worked in library world almost five years, this was the first time there was something local that didn't conflict with my storytime schedule and had a low enough cost that I felt like I would not be out of line requesting it through work, and that I could do on my own time & dime if it was denied. Part-time staff aren't really encouraged to seek professional development in my system, so I've always felt funny about asking, and have only done things on my own up to this point.

But, I figured it was not an unreasonable request and worth a shot, and it was approved! While I would love to go to one of the bigger conferences, I was still looking forward to the chance to attend and hopefully learn something new, not to mention getting to hang out with my "people" and meet some authors. They had a couple of big names coming, Avi and Michael Hall, as well as one I was unfamiliar with, Ashley Hope Perez. I particularly wanted to get Avi to sign a copy of his book Iron Thunder for my nephew, the civil war obsessed reluctant reader. I had given him a copy of this book a year or two ago, and he actually read it and liked it.

So, did it live up to my expectations?

I'd say it did. I didn't expect anything earth-shattering and knew individual presentations would be hit-and-miss: some would be good, some would kinda suck, and most would just be okay. Just like every book can't appeal to every reader, every presentation isn't going to suit the interest or experience level of every attendee. I attended a great presentation by the teen librarian from a neighboring system in which she reviewed 40 YA books in 45 minutes, and was very entertaining while doing so. While this doesn't directly relate to my current position, it does help me be more familiar with YA literature, which is probably my weakest area, as I just don't have time to read everything. I do work the service desk 1 day a week and I'm taking a YA Lit class in the spring, so that info may very well come in handy at some point.

There was a presentation on passive programming I liked as well. Though the library I work at has done several of the things they presented, this is a relatively new thing for us and I still enjoyed seeing what others have done. There was also a presentation on LBGTQ+ manga that helped give me a little bit better understanding of manga in general, and that genre in particular. One presentation that was titled as having to do with reluctant readers turned out not to be at all what I expected, but I did learn about a line of seriously cool "Photicular" books that have optical effects that make the photos appear animated (see the video below). Only one presentation was one I would call a total dud.


Now to the authors! The one that I was unfamiliar with turned out to be the most personable and give the best presentation. Ashley Hope Perez described how the high school students she taught greatly inspired and shaped her writing career, starting with one student challenging her to stop talking about writing and start doing it, and another reluctant student telling her that her manuscript was the first book he ever read because he wanted to. She also told the very interesting backstory of the true tragic historical event that inspired her most recent story, Out of Darkness, and by coincidence was related to my husband's career as a natural gas pipline engineer.

Michael Hall's presentation was interesting because he showed us many early renditions of his work, unpublished stories, and some of his other graphic design work (logos). He explained his thought processes, why he drew things the way he did, and how they evolved from early concepts to the final product. I was surprised to learn we had something in common, as he had first had a career in science as well, which we chatted about afterward while I got him to sign a copy of his Little i. I was hoping to get a copy of a picture he had showed in his presentation of a double helix made up of cat figures resembling DNA, but alas, he said it was unavailble 😢

Avi was not quite as personable as the other two, and I did not get to see his presentation, but he did graciously sign my copy of Iron Thunder.

All in all, it was a good day, and I think worthwhile. While I wish I could attend YALSA which is happening just an hour away next month, since I don't work with teens I really can't justify the expense, and only a very select few full-time professional staff get to attend the big out-of-state conferences, so PLA is out next year as I can't afford it on my own. But, the ALSC conference will be held only about an hour and a half away next fall, so I really hope I can go to that, and the next PLA in 2020 will be only 3-1/2 hours away, so no plane tickets required, so I should be able to afford that on my own.

What conferences have you found the most worthwhile to attend?
Posted by Jen at 11:11:00 PM