So far this year I've done topics related to physics, chemistry, geology, engineering, and microbiology, so I decided it was time to do something from the field of astronomy. I chose to focus on the moon, and doing activities to learn about how craters are formed, solar and lunar eclipses, and the phases of the moon.

I put together a few slides in a PowerPoint presentation, showing close-up pictures of the moon with the craters clearly showing in relief and a picture of the earth taken from the moon. We talked a little about the moon, and how it goes around the earth, asked them what they noticed about the photos. We discussed the craters, how they might be formed, and why we don't see them in pictures of the earth. Then we did an activity to simulate how craters are formed. 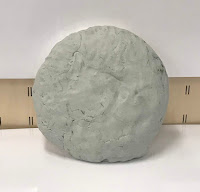 1. I had a 14" styrofoam cake dummy leftover from my wedding cake business from years ago, so I carved the sides down to round them off into a convex shape.

2. I had some of the early arrivals help me cover the styrofoam form with salt dough that I had colored gray, then propped it up on a table, against the wall.

3. Then everyone took 2-3 turns throwing different balls at it, to simulate meteors hitting the surface of the moon.

1. I set up a lamp with a 40W spherical bulb to represent the sun (a regular bulb is fine, too), and covered a 3" styrofoam ball with aluminum foil to represent the moon, and stuck a sharpened pencil in it to make a convenient handle. I asked the kids to guess what each represented, and of course they did, then told them that they would represent the earth.

2. I first turned the light off, and demonstrated how to stand in front of the "sun", and gradually move the "moon" until in between their head and the sun, creating a total solar eclipse, then continue until the eclipse was over.

4. I had two stations set up, and then let them takes turns trying it out themselves. (The eclipses are more obvious that the phases with this activity.) The video below demonstrates the phases:

Activity #3 - Edible Phases of the Moon

1. I pulled up the slide showing all the phases of the moon, and briefly reviewed it, then handed out the supplies: paper plates, cookies, plastic knives, and small zip-lock bags with a little icing in them and the corner snipped off.

2. Then I showed an example of how the cookies could be used to demonstrate the phases of the moon by carefully twisting off the tops and using the knives to remove and shape the filling to look like the different phases. The bags of icing were to be used to "glue" the cookies to their plates.

3. Then they were to use a pen to label each phase and add arrows showing the order.

4. I told them they could eat the tops and discarded filling now (if it was ok with their grownup), but to take the finished project home and eat later, whenever their grownup said it was okay.

I had a good turnout of 13 kids and 7 adults, and the kids seemed to enjoy it, but I was not really happy with it. I felt like I ended up doing too much "lecturing" and not enough hands-on. I struggle with finding good hands-on activities for space-related themes, other than those that are more engineering, focusing on the rockets and rovers used to explore space.

The crater simulation did not work as well as I'd hoped. The balls were not hard enough and the kids could not throw hard enough (or with enough accuracy, even from very close!) to make anything more than slight dents, rather than more dramatic craters like I'd hoped. In retrospect, I wish I'd thought to just have them come up and just hold onto the balls and hit it, or just use their fists. I've also seen this done with shaving cream or paint spread in a circle, which might work better, but would also be much more messy.

Using the lamp and props to simulate eclipses worked really well, but the kids did not seem that interested in it. Seeing the phases of the moon was much more subtle with this activity, and most of them did not have the patience or perception to really see it.

They were all excited about getting cookies, but some did not have the patience to complete the activity and do it correctly, and I had a couple of parents that were completely checked out and not doing the activity with their children as they are intended to with this age group.(I also had 1 package of cookies that were gluten free.)

I'm always disappointed with how few of the books I pull related to the theme get checked out.

As mentioned already, I'd try having much heavier balls or rocks even, and instead of throwing horizontally at a vertical target, I'd just put the target on the floor and have them drop them on it, or just hold onto them and hit it. The salt dough did make a nice moon-looking surface, though.

I was not happy with how the other two activities went, though the kids were happy to get cookies, and I don't think I'd use them again, but I'm not sure what I'd do instead.

I think the biggest thing I would do differently, is just not do the theme. I've realized it's better just to skip it if I'm not thrilled with how well it lends itself to hands-on activities, or activities I like, than to force it just because we haven't covered it. Some things are just better suited to this age level (supposed to be 5-10, but the reality is mostly 5-6-7, and usually at least one younger sibling) than others.

Then with the continuing issue of parents not participating or adequately supervising, I've got to remember to make my spiel about expectations and safety every time!

If you've done this theme with greater success, I'd love to hear about what activities you used!
Posted by Jen at 12:36:00 PM