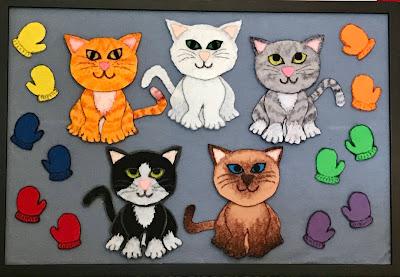 June is "Adopt a Shelter Cat", so in honor of that I decided to make a set of felt kittens. I have had quite a few cats in my lifetime, and they were all either strays that showed up at my door, adopted from a shelter, or adopted before they ended up at a shelter. 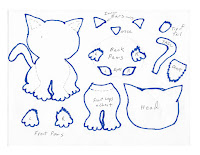 I used a combination of methods to make these kittens. While you could simply cut them out in one piece and use markers (or paint) to add details as I did for my recent dinosaur set, I decided to give them more dimension by cutting out multiple pieces and layering them, then going back and adding some outlines and shading with colored Sharpies. I made my own patterns based on clipart using a combination of tracing and freehand.

The orange tabby is in honor of Tiger, the best cat I ever had. The tuxedo is an amalgam of Toby, the shelter cat I currently have, and Boots, the shelter cat my daughter just adopted. The gray tabby is the first cat my husband and I had together, and the white and Siamese are just random.

First I made up a rhyme that counts down: 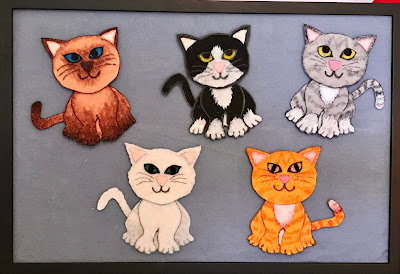 Five little kittens, running out the door.
One went back inside, and then there were four. 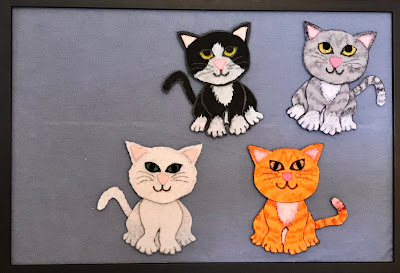 Four little kittens, trying to climb a tree.
One chased a squirrel, and then there were three. 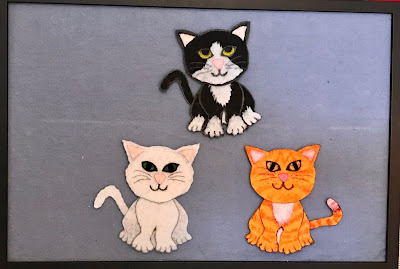 Three little kittens, wondering what to do.
One followed a butterfly, and that left two. 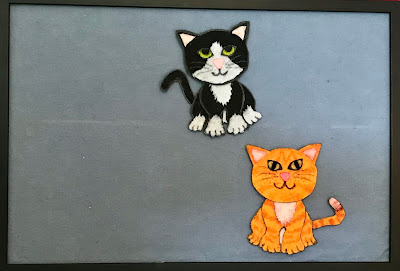 Two little kittens, playing in the sun.
One went to find a snack, and that left one. 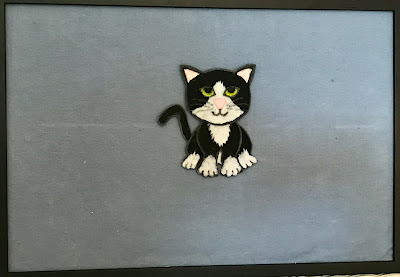 One little kitten, being alone is no fun.
So he went to find the others, and that left none.

Then I made up a counting up song, similar to the dinosaur one I shared a couple of weeks ago:

One little kitten went out to play, out in a sunny garden one day.
She had such enormous fun, she called for another kitten to come.

Five little kittens went out to play, out in a sunny garden one day.
They had such enormous fun, they played all day 'til the day was done.

And of course you can add some mittens in primary and secondary colors, pick your three favorite kittens, and use them with the traditional nursery rhyme, which I've modified a bit: 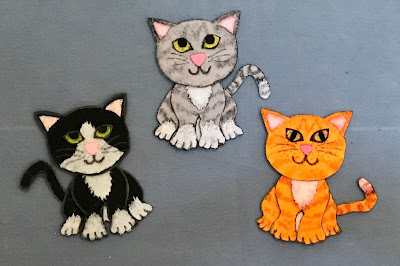 Three little kittens have lost their mittens,
And they begin to cry,
"Oh, mother dear, we sadly fear
Our mittens we have lost!"

"What, lost your mittens?
You naughty kittens,
Then you shall have no pie!"
(Sadly) Meow, meow, meow.

[Bring out a mitten and have kids name the color and select which kitten. Repeat, with different colored mittens, identifying colors and rejecting mittens that don't match the ones the kittens already have. Once all three kittens have two matching mittens, then say the next verse of the rhyme.] 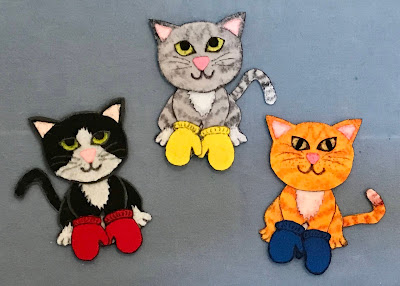 The three little kittens have found their mittens,
And they begin to cry,
"Oh, mother dear, see here, see here!
Our mittens we have found!"

"What, found your mittens?
You darling kittens,
Then you shall have some pie!"
Purrrr, purrr, purrr....

You could stop here, and discuss what kind of pie kittens would like or how the secondary colors are made by combining two primary colors, or you could continue with the other verses about soiling and washing their mittens.

And a bonus rhyme that is modified from one I found at CanTeach.com: 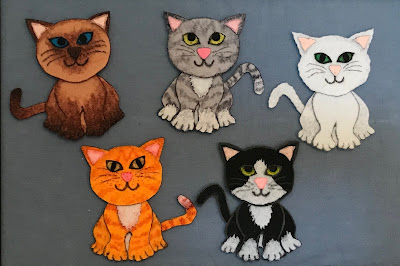 Five little kitty-cats,
See them play,
This one brown,
And this one is gray.

And just for fun, here's a picture of my fat tuxedo cat with his more svelte felt counterpart: 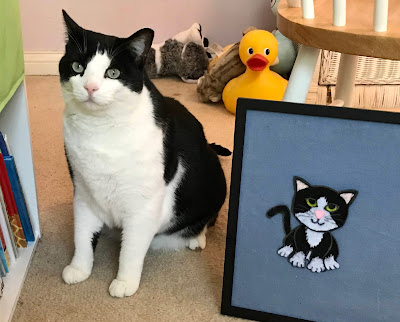