Yee-Haw! Saddle up for Cowboy/Cowgirl Storytime

My manager requested I come up with a list of books and activities with a cowboy theme, so I figured why not kill two birds with one stone and use the same theme for my preschool storytime this week :) 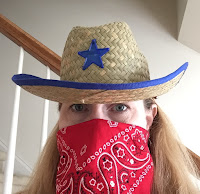 As the kids have just moved up to the 3-year class are still on the young side and not quite settled in, I am still keeping it a little shorter and just doing two books.  We started with our welcome song, which we did twice since most of them didn't know it yet.  Then I asked them to guess what our topic was, and then told them I'd give them a clue and put on a bandana, followed by a cowboy hat, but they still didn't get it.  So I explained about cowboys, and how the bandana was used so they could breathe without getting all the dust in their mouths and noses. 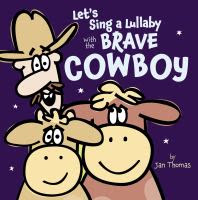 We led into our first book with our "story song", to which I added a couple of cowboy-related verses, like "say 'Yee-haw'".  For our first story I chose Let's Sing A Lullaby With The Brave Cowboy" by Jan Thomas, because it is short, funny, and very engaging.  Another thing I like about it is that I can cover up my terrible singing by using a heavy cowboy twang :)  Jan Thomas's books are always a big hit for storytime because they are funny and very interactive, and they also have nice, simple bold illustrations with heavy black outlines.  The simplicity and high-contrast really attract and hold attention better, especially with young children.

Next we did a little fingerplay called "Ten Little Cowboys" that came from Storyshare by way of Sunflower Storytime:

[I also explained and demonstrated what a real bow was first] 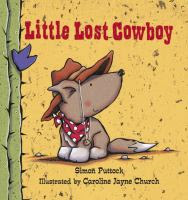 For our second story I was torn between Lost Little Cowboy by Simon Puttock and Are You A Horse? by Andy Rash.  I wish it had been later in the year when they could have handled three stories.  But in the end I decided on Lost Little Cowboy because I really liked the artwork and I knew the kids would like howling along with Cowboy Coyote and would empathize with his misfortunes.  I also wasn't 100% sure they would truly appreciate the humor in Are You A Horse? at this young age.

We finished off the theme with an action song to the tune of "I'm A Little Teapot" I also found at Sunflower Storytime:

[I explained what chaps were]

Then we ended with our usual closing song, and I gave them all stamps of a horse.

How It Went
I must have *really* made an impression with them last time, because all they want to talk about was shapes at first!  When I asked them to guess the theme, they all said shapes, and when I put the bandana on, one boy said "Triangles!",  which was a reasonable inference from the shape on the folded bandana (plus this boy is also a triangle fan, just like Telly on Sesame Street).  Then when I put on the cowboy hat, they first said "Circle!", then started calling out random shapes.  They were *so* sure I was doing something about shapes again :)

I tried to prompt them by asking who wears a hat and bandana like that, but no one guessed it.  Clearly cowboys are not big in pop culture any more.  I wonder if I'd thought to bring up Woody from Toy Story if they would've gotten it?  So, I had to explain it a little, and I really wished I had thought to find a good non-fiction book with a couple of pictures to show what cowboys did and how they dressed.  Oh well, hindsight is always 20/20, isn't it?

They really liked "Let's Sing A Lullaby With The Brave Cowboy,"  and some even asked to read it again.  They didn't sing along to the song as much as I'd hoped, but I did hear several humming along and a couple trying to sing, and they REALLY got into reacting to the cowboys imagined fears.  Like the cowboy, by the end they figured out the pattern of something that looked scary turning out to be harmless, and they too thought the wolf was going to be something else.  They really laughed at the wolf putting on his nightcap & jammies and snuggling up with the cowboy and cattle for a lullaby.  And we all agreed the cowboy really wasn't very brave, after all.

Lost Little Coyote might have been just a tad too long for them, and I had to first explain that there wasn't an actual cowboy, that the coyote pup's name was "Cowboy".  But they did feel sorry for him being lost and hurting his nose on the cactus and predictably enjoyed joining in with all the howling.  One little girl was obsessed with the moon, and kept worrying what happened to the moon on every single page that it wasn't shown.  And they were all glad his mom found him in the end.

They also seemed to like the "Ten Little Cowboys" fingerplay more than the "I'm A Little Cowboy" song, and I had kind of expected the opposite.  Sometimes you just never know....  I wish I could have done a felt board, but their just really isn't enough room to maneuver in this particular classroom.  I noticed during the second story the teacher left the room, and at the end I realized she had gone to make copies of a coloring sheet she had that fit the theme with a desert scene and rattlesnake.  That's always a huge compliment to see the teacher extend what I have started.

This class is a very talkative class and still needs a little reigning in, but I think they are going to be a lot of fun and I bet it's not long before they settle into the storytime routine and we can start to stretch it out little by little.
Posted by Jen at 12:38:00 PM