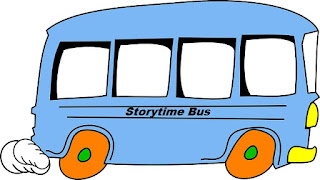 This was the second week for our "colors" theme, and we used most of the same books as last week.  Again, Pete The Cat, Lemons Are Not Yellow, Snappy Little Colors, Mouse Paint, Monsters Love Colors, and Brown Bear, Brown Bear were the biggest hits.  You can always tell the kids that already know Pete The Cat because they will be the only ones to answer "Goodness, no!" instead of just "No!" when you ask if Pete cried :)  I gave Spicy Hot Colors one more try, but it just did not work; the kids had no interest in it at all, except for the page with the skeletons.

I finally had one class that had not one, but two or three kids that knew what the mole in Snappy Little Colors was; no one else in the whole 2 weeks knew what it was.  That class was also the one with a kid who piped up and said "It is during an eclipse" when reading the part about the moon not being black in Lemons Are Not Red.

I did have one class that I just could not get engaged no matter what; this was the first time I had ever seen a Snappy pop-up book not be a huge hit.  Part of the problem was that they were a bit too young.  The minimum age to come on the storytime bus is 3, but at the beginning of the year, half the kids that are in "3-year old" classes haven't actually turned 3.  Also I think it was the first time several of them had been on the bus, and the first week in that class or maybe even at daycare.  Some seemed apprehensive, one even started crying, and several others seemed like they had never been read to before, which is a little sad.  But these are the kids this program was developed to help in the first place.  Not to mention the "teacher" was very young and didn't participate or engage herself.  Next time we have this particular group, I'm going to try sticking with simple board books and sitting in the floor with them (as much as this middle-aged body doesn't want to) and try to make it more intimate and cozy and try to talk to them one-on-one.

However, the second group at the same daycare, was the complete opposite.  They were so excited to be there, enjoyed the stories, sang along with Pete, and a few joined in with reading Brown Bear.  They listened and participated very well, and loved the Mouse House flannel game, which I will describe in more detail below now that I have pictures of our particular pieces.  They were so much fun, and enjoyed everything so much, it made my day. 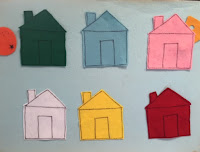 So, now I have pictures of our "Mouse House" flannel board (I inherited it).  As you see, there are houses of different colors and you hide the mouse behind one.  The set also had an orange, apple, and cheese pieces.  I'm not sure what the original intent for these was, but I go ahead and hide those, too.  I put the mouse behind the apple, under the last house on the board.  I tell the kids that I saw a mouse scurrying around earlier and I think it hid in one of these houses and ask them to help me find it. 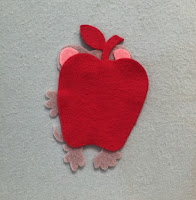 Then one by one, we say together "Little mouse, little mouse, are you in the  (color)  house?" and peel back the house.  I like to try to build the suspense and just peek, then put it back down, and if it's the one with the orange or cheese, I say "I see something in there!" and then when revealed say the mouse must have hidden it there to save for a snack later.  When we peel off the last house, which everyone is sure MUST have the mouse, and show the apple, I play dumb and say, "Oh, it's just an apple.  Where did that little mouse go?"  Then watch as the kids observe the ears and feet peeking out and tell me to look behind the apple. 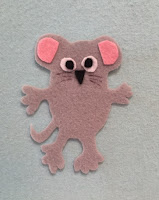 It is amazing how much every class loved this!  You can also hide it randomly and let the kids take turns picking a color, which I did with a couple of small groups, but it seemed like they had more fun the other way.  I plan to add at least two more colors and a couple of other random objects to hide as well.  Out of all the activities we did, I think the kids enjoyed this one the most, as did I, though they all seemed to like the "If You're Wearing Red Today..." song as well, except for the one class that just seemed too young to get it.

On the very last day for this theme, 3 out of 4 classes all had one new kid who was having a hard time adjusting and dealing with separation anxiety.  One little girl starting crying as soon as she came on, and when I took her hand to ask her what was wrong, she threw her arms around me, looking for comfort even though she had never seen me before.  I felt so bad for her.  She didn't want to sit in the floor with the rest of her class, so I let her pull up a little chair next to me and told her she could sit with me today, but next time she would need to sit with the other kids.  She calmed down right away and started participating and by the end I convinced her to sit in the floor so she could see the pictures better.

Another class had a boy that cried off and on the whole time and wouldn't leave his teacher's lap, and a third had a boy who took the grumpy, sulky route and just sat there and refused to participate.  Transitions are tough for some of these little ones, but I can guarantee within a month or two they will be excited about "school" and being on the Storytime Bus :)
Posted by Jen at 2:09:00 PM