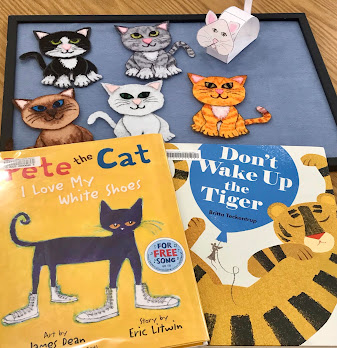 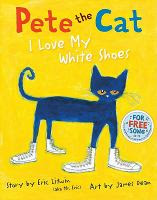 Now we were ready for our first story. Following our lead-in "story song" I read the modern classic, Pete the Cat: I Love My White Shoes by James Dean and Eric Litwin. This is such a great storytime book for many reasons. It has a now-familiar character, text is short and simple, it includes the basic concept of colors, has a lot of repetition, a great blues-y rhythm, and includes a song. On top of all that, it has a great message about not letting the little things that go wrong ruin your day.
I really like the original four books, but I have to confess the later books written by Dean's wife after he split from Litwin (Dean is a folk artist who made up the character and Litwin is a folk musician who wrote the stories and songs) fall flat for me and just don't have the same magic.
After working on colors with Pete, it was time to break out my flannel board and work on counting with my felt kitten set: 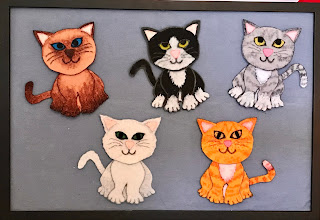 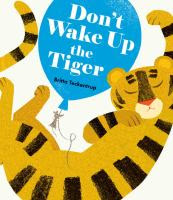 For our final story I chose Don't Wake Up the Tiger! by Britta Teckentrup. This book is great for keeping the younger or more wiggly kids engaged because it is short and sweet, has simple bold illustrations with bright colors, and is very interactive. The animals in the story have a problem; a sleeping tiger is blocking their path, and they have to get over her without waking her up. Luckily, they are carrying a bunch of brightly colored helium balloon which they use to float over the tiger one by one.
But, each encounters some trouble, and the reader and audience are prompted to take various actions: blowing the balloon to keep it afloat, singing a lullaby to keep the tiger asleep, rubbing the tiger's tummy... All is well until stork's beak pops a balloon and wakes the tiger up! The audience is sure the tiger is about to eat somebody, only to be surprised when the page is turned to reveal a surprise birthday party for her. We sang "Happy Birthday" and counted candles on the birthday cake to see how old Tiger was.
I ended with announcements and showing them the take-home craft, then we sang our closing song.
Take-Home Craft

I found this cute little bobble-head kitty craft on the "Fireflies & Mudpies" blog, which provides a free printable pattern that can be colored and used directly, or cut out and traced around as a pattern.

I printed the pattern on cardstock as paper just wasn't heavy or stiff enough, and wrote my own directions with my own step-by-step photos. I gave each child one printed pattern set, the sheet of directions with a coloring sheet on the back, a sheet of black construction paper, and two googly-eyes. Two of the kids had to bring their bobble-head kitties to storytime the following week to show me, so I guess they were a hit.

How It Went
I had a rather small group, just three families, for a total of 6 kids and 4 adults, and only one of them had intentionally planned on coming to storytime, the other two families just happened to be at the library at the right time. Though logically I know it was likely due to people planning vacations around the 4th of July, I can't help but be concerned when I see a big drop in attendance (after having 27 two weeks before). I wonder if I will ever stop second-guessing myself when attendance wavers? Does everyone else do this?

But other than the small turnout, it went very well. I had great participation, and the kids really liked the cat puppet. One little girl even asked if she could say good-bye to my kitty. As always Pete and his white shoes were a big hit with the catchy tune and repetition, but they liked the other book as well, and they enjoyed all the other activities. One of the youngest got a little restless and had trouble staying engaged, but I was able to keep re-focusing her by addressing her by name as I pointed out something in the story or asked a question.
Posted by Jen at 12:29:00 AM