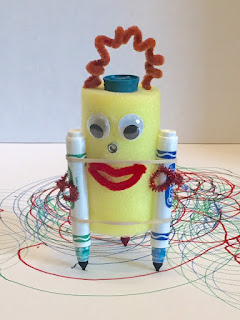 Last summer I came across a great program idea, using the vibrating motor from a cheap DollarTree electric toothbrush (shown below) and a pool noodle to make a simple "robot" that doodles. The first time I did this program, it worked well and was a big hit. There was a little trouble-shooting involved, but nothing major.

However, when I repeated it earlier this summer, it did not go so well. We had major problems with the motor assembly not being able to maintain connections, thus the current would be interrupted and the motor wouldn't vwork. It was very frustrating for all of us, to say the least.

So this time, I modified the protocol. Instead of removing the motor, battery holder, and switch from the toothbrush and taping them up together as shown below:

I left them intact inside the toothbrush and just cut the toothbrush head off, leaving just the handle containing the motor, batter holder, battery, and switch, keeping everything nice and cozy so the circuit would stay intact. I used a bandsaw, but you could use heavy duty snippers or a handsaw, possible a router, as well.

First, I did show them a disembodied motor and how it worked, and let them all see it up close and touch it if they wanted. Then, each child chose one 4.5" piece of pool noodle (we had several colors), one motor assembly (the toothbrushes came in various colors as well), and 3 markers. First, they inserted the motor into the center of the pool noodle. Then, they used 2-3 rubber bands to attach the markers to their bots, taking care to place evenly so the bot would not tip over. If desired, you could tape or hot glue the markers in place, but I think it's kind of neat to see how their movement changes as the markers shift, or they may want to change out colors.

After that, it was time to personalize their robot with miscellaneous craft supplies. We have found that hot glue works the best, so we had several low-melt glue guns and had adults man them. Glue dots work okay for some things, like eyes or jewels, and pipe cleaners and feathers can be inserted right into the foam. You can see some of the creations the group made today below: 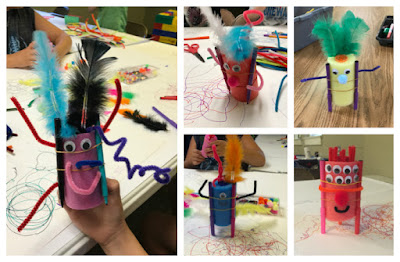 Once finished, take the caps off, make sure markers are level, turn the motor on, and let it go! I strongly recommend washable markers, and large pieces of paper, as the bots do tend to have a mind of their own. We covered the tables with paper from a big roll of art paper, and then gave each kid an 11x17 sheet.

Here is a video of my prototype in action:

At the beginning of the program I did a demonstration to show how electricity flows through a circuit, and how important is that all connection be maintained using these cool gadgets from Lakeshore called: 'Light and Sound Touch Circuits" It is kind of like a short light sabre with handles at each end. One person can complete the circuit by holding both handles, or two people can complete the circuit by each hold a handle, then touching their free hands together. I called up a volunteer to demonstrate, then we tested to see if it would work if we made a circuit with ALL of the kids holding hands.

The kids really liked these gadgets and were very impressed it worked with all of us. After they finished with their bots, we let them have free time to play with the Touch Circuits. They experimented with all kinds of crazy circuits, and liked them so much they didn't want to give them up! (They actually produced multicolored lights, but it just photographed as white light, and you can switch off the sounds). 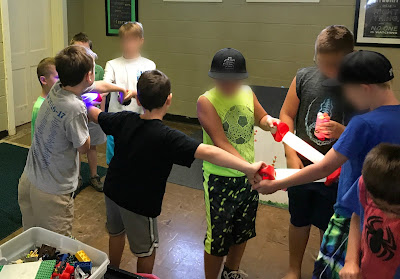 This program was much more successful than the last time, no frustrations, and the kids and adults all seemed to really enjoy it.
Posted by Jen at 2:35:00 PM