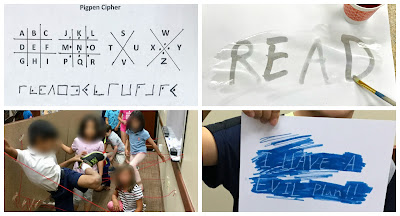 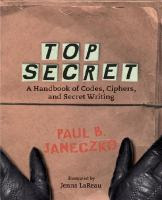 I was at a loss for a program idea when the deadline snuck up on me, so I took a colleague's suggestion to do a "Spy" theme as she had done it before at another branch and said it went over well. I decided to focus on cryptography, playing around with codes, invisible ink, and other ways of sending secret messages, plus a laser beam obstacle course just for fun.

I got my ideas for hidden messages from WikiHow and ThoughtCo, and my codes from a book in our collection, Top Secret: A Handbook of Codes, Ciphers, and Secret Writing by Paul B. Janecszko (2004). If you're doing a similar program on cryptography, I highly recommend it.

Ages: 5-10 (5 was really just a little too young, those that didn't know how to read, or at least know the alphabet well, or do basic addition and subtraction got frustrated and bored during the code & cipher part, but the hidden messages worked well for all ages.)

Time: 1 hour and 10 minutes. To do everything I had planned would really require at least an hour and a half. So either allow more time, or do a little less.

Number: 15-20 kids is a good number, though it could work with a large group if all the kids were over 6. 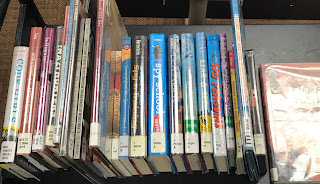 I had also pulled a number of books for them, a variety of non-fiction, historical fiction, and fun fiction that had to do with spies, cryptography, and espionage for them to look over and hopefully check out afterward.

1. I gave them a piece of paper, and instructed them to write down the letters of the alphabet, then number them, starting with A=1, B=2, etc. I was a bit surprised that a few struggled with this, but it is early in the school year, so I guess the kindergardners hadn't all master it yet. I could have already printed it out for them to save time, but I wanted to include a little literacy and writing. 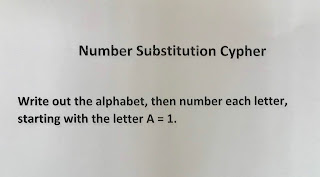 2. I then explained how you could use that to write things in code, by writing the corresponding numbers in place of the letters. For example, "CAT" would be "3 1 20" using that code. I said messages could be hidden in plain sight by disguising them as math homework, and gave them this list of simple addition and subtraction equations to solve, and then decode using the simple code they just created. 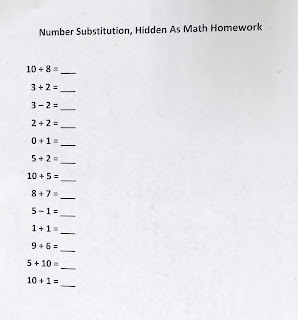 3. By solving the equations, and writing the letter that corresponded to the numeric answer for each one, they were able to discover this message "READ A GOOD BOOK".

This one supposedly dates back to the crusades and was also used during the civil war. It is actually fairly simple, but it looks like alien writing. I showed them my name written with this code, and they couldn't believe it said anything!

1. I demonstrated how this code was formed, drawing the grids and filling them in, then showing how the portion of the grid around the letter is what is used to indicate the letter. Then I gave them a copy of the printed code charts, with a message to decode. 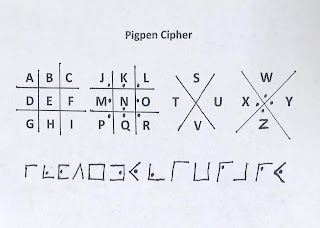 2. Some were a bit confused at first, but once they got the hang of it, they quickly decoded it to reveal the message "I LOVE MY LIBRARY" (and no, I'm not above a little subliminal suggestion). I think they liked this code a lot because it looks so weird; I do, too.

We didn't have time to do these in the program, unfortunately (I could've done the whole hour just on codes), so I sent them home with them. 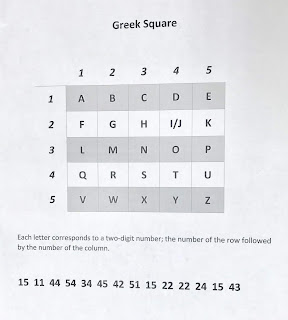 When decoded, the message says "EAT YOUR VEGGIES"!

2. The second was a free printable decoder I found online from the blog "All For The Boys". You simply cut out the two circles, put the smaller one on top of the larger, and poke a brad fastener through the center to hold them together. You can then rotate the top disc to form a substitution code using the letters of the alphabet rather than numbers. For example, if you rotate it just one spot, then B stands for A, C stands for B, and so one, with ? standing for Z. 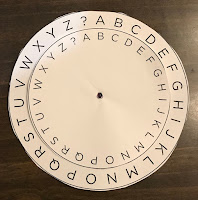 1. First I instructed them to write a simple message or image with white crayon.

2. Then they colored over it with a washable marker. Voila! The invisible message is revealed! It helps with the marker to go over it in two directions to get the best result (watercolor paint is another option). 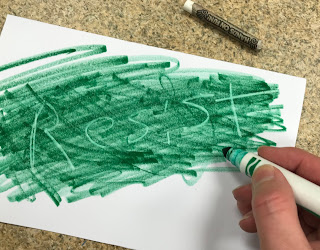 (The message is referring to the method used.)

We discussed how crayons are made of wax, which is hydrophobic and repels water, so the watercolor or water-based ink doesn't stick to it like it does to the paper, revealing the message.

If you've watched any cheesy detective/mystery shows on TV, you'll be familiar with this classic trick!

1. Put one piece of paper on top of the other (in TV it's always a notepad), then with heavy pressure, write a message or draw an image on the top piece of paper. 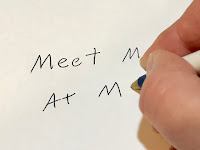 2. Set the written message aside, then take a pencil and lightly go over the blank paper underneath, like doing a rubbing, and eventually the original message will be revealed, if enough pressure was used.

1. Make a concentrated baking soda suspension, 1 part soda to 2 parts warm water. It won't really dissolve, so you have to stir it well and keep it suspended as you use it. Using a q-tip or fine brush, use the baking soda solution to write a message or draw an image. Let dry.

2. Paint over the message with cranberry or grape juice, and the reaction of the baking soda with the with the acidic juice causes a color change, revealing the message. 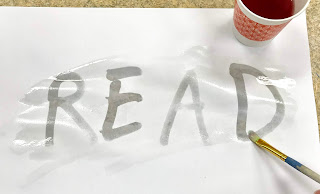 3. Next they used skim milk to write a message, and let dry. Once dry, an adult used a hot clothes iron on high (hair dryers, light bulbs, and hair straightening irons do NOT work) to go over the paper. The sugars and proteins in the milk will scorch before the paper does, revealing the message. (A sugar solution will also work, though the oft touted lemon juice doesn't work nearly as well).

Activity #8 - Laser Maze!
What spy movie would be complete without a scene of someone trying to make their way through a labyrinth of laser beams without breaking one and setting of an alarm, or worse, a booby trap?

My wonderful coworker who suggested this theme graciously set up the laser maze for me and crawled through it to test it out. We used red yarn, but I've also seen crepe streamers used as well. The kids had a blast! 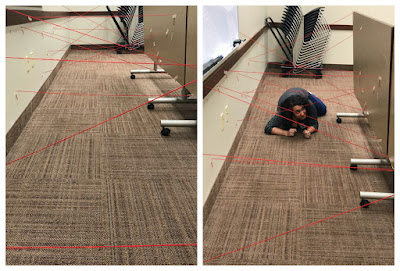 How It Went
Other than planning too much and having some of the younger ones struggling a little, it went really well. I always under-estimate how long it will take the kids to do things, and it took way longer for some of them to write out the alphabet than I would ever have expected, and some needed more help and individual explanation catching on to the whole code thing.

Then on the other hand, there were a few older ones who zoomed though all the coding super-fast, so they started writing coded messages for each other to figure out while we waiting on the rest. It's hard to accommodate such a wide age range, from age 5 to 10, as the kindergartners are still working on their ABC's and counting, while 5th graders are reading novels and doing simple algebra! Though I think 3rd grade was the oldest I had today, and this program was perfect for them.

I'm glad I tested all the invisible inks I was considering in advance, become some didn't work at all as described, but the ones I chose to use worked very well for those that followed directions (some didn't keep their baking soda suspended).

I was disappointed that only 1 person took one of the books to check out. At the previous location I worked, it seemed like people would checkout books related to the programs if we had them on display, but here for some reason they seldom do, even though this community in general have a much stronger reading culture.

It was interesting to see what they put in their "secret" messages.

What I Would Do Differently
In an ideal world, I would lengthen the program and narrow the age range to ages 7-10, because kids really needed to have mastered their letters and numbers, and be able to read and do basic math to understand the coding. I think it would be neat to have a "training" session where they learn the codes and hidden message techniques, then have an activity that combines it all to solve or find something.

But, since that really isn't a possibility in my current library, I would have cut out more and sent more home. Even with sending home two activities, we were really rushed and didn't spend as much time on each as I'd like. I could honestly do an entire hour just on coding, or just on hidden messages. I wish now I had just gone ahead and printed the alphabet out for them, with corresponding numbers, as that took way too much time. I would also cut out the rubbing/impression hidden method, because while it works, there just wasn't time for that many, and they'll see it on television or in a movie eventually.
Posted by Jen at 2:46:00 PM