I had pulled several fall-themed books to use for this month's outreach visit, sure that by October 7th we would be having more fall-like weather. So needless to say, I was starting to wonder if I should pull a different selection when we were still having 95-degree weather all last week! But, over the weekend Autumn finally arrived, and I woke up to a cool, rainy, 53-degree day. The books I selected to take, to cover babies through pre-K were:

Because the daycare decided to just have me visit the toddlers and 2-year olds today, I ended up only using a few of the books I brought.

I've been visiting this daycare for about 8 months, and have always struggled with knowing what to do for the toddler group, as all my prior experience was with ages 3-5. While they respond very well to familiar songs that have motions to do with them, I had never had any success with books. No matter what books I tried, they would completely lose interest and all start wandering off or getting into my stuff. I really felt like doing storytime with kids this young in a daycare setting was rather pointless and that they were better off with a music program, but I still felt obligated to try at least one book each time.

Well, today was rather monumental in that I was able to get them to engage and pay attention to not just one, but TWO books! I was so thrilled! It may never happen again, but it was still a beautiful thing.

I was greeted with lots of big grins, and started off with my "Hello, My Friends, Hello" song, and followed up with "Hello, Everybody" which involves identifying different body parts doing motions. I didn't get the usual level of participation, so I then moved to one that I know they all know and love, "The Wheels On The Bus", which finally got them going. 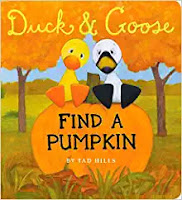 While I had their attention, I quickly moved on to the fall book I brought specifically for them, a large board book version of Duck & Goose Find a Pumpkin by Tad Hills. This is a very short story with very little text, showing the two friends looking in several unlikely places for a pumpkin, before their friend Thistle clues them in to the pumpkin patch. And much to my surprise, most of them stood or sat and looked at the book the whole time! They loved the Duck and Goose, and found the pictures very engaging. I really love the fall color palette of this book myself, with lots of pretty oranges, yellows, and golden tones.

I followed that up with a quick, simple pumpkin song: 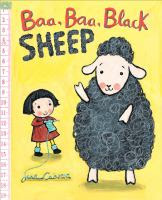 Then I decided to try Baa Baa Black Sheep by Jane Cabrera since they were doing so well. I had been meaning to try one of Cabrera's books that are based on songs and can be sung rather than read since this group responds so much better to music, but had forgotten the last couple of times. I pointed out the sheep and one child named it, then several knew it said "baa". That helped get their attention, and the repetition and singing helped keep it. They swayed along with me to the music, and nodded their heads with me to the "yes, miss; yes, miss, three bags full".

Then I sang a quick "Goodbye" song, and got lots of grins, waves, and high-fives goodbye. Such a great way to start the morning!

I visited two different two-year old classes, one is slightly older than the other. Both times I started with the "Hello" song, then warmed them up with "Hello, Everybody" and led into the story with my "If You're Ready For a Story" song. 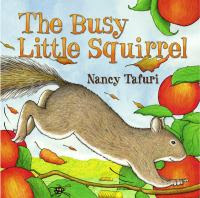 I read The Busy Little Squirrel by Nancy Tafuri to the first class. This is a short, simple book that is usually good for younger kids as they can identify each animal the squirrel encounters, make its sound, and identify the foods the squirrel is collecting, though they often need help with the corn and berries.

We talked about how acorns are probably a squirrel's favorite food, which led to a rhyme about five little acorns and a squirrel:

Five little acorns, laying on the ground.
The first one said, "I'm big and round!"

Down climbed the squirrel and took them all away,
Back up to his nest, for a cold winter's day! 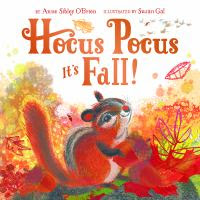 Then we read Duck & Goose Find A Pumpkin followed by singing "Did You Ever See a Pumpkin", and our "Goodbye" song.

For the second, slightly older group of 2-year olds, I read Hocus Pocus, It's Fall, having the audience say all the magic words. This book was a little long and the illustrations a bit too abstract for this age, so I started loosing them towards the end. I pointed out again the page with apples and all the different colors of apples, then we sang this apple song:

I could tell they'd had enough by then, so I decided to go ahead and stop there with a "Goodbye" song, even though there were a few minutes left.

How It Went
Overall, it went well. It is rare that all classes on an outreach visit do well, so if I get one really good one and no really bad ones, I count it as a win! I was absolutely thrilled at finally being able to get the toddlers to pay attention to a book! I will probably try another book that can be sung rather than read next time. I just wish I had time to visit each class every month, but I'm only given an hour and there are 5 classes, so I have to rotate. It makes it harder to build rapport and have any continuity, but I do the best I can.