I almost didn't write this up since I've done nearly the identical storytime in the past, but there was the addition of a craft and/or activity afterward, and I made a small but significant change in my intro. I had really wanted to use  books I hadn't used before, but I just couldn't find anything that I thought would work as well with the younger kids I usually get as these tried and true winners.

I decided to drop the welcome song I've used for years, and use the short and simple "Hello" song I've been using in my outreach storytime, along with "Hello, Everybody" as a warm up. Then, since I've had issues with people jumping up and leaving after the first book, and poor participation in the after-storytime craft, I made sure to mention that we would have 2-3 stories and songs, followed by a craft or activity, in the introduction.

After introducing the topic of monsters, we pretended to be monsters with this simple rhyme, which ends with everyone sitting down, ready for the first story: 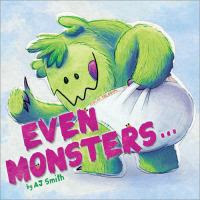 Even Monsters... by A J Smith is a fun book, showing how monsters do many of the same things the kids do, like getting dressed, going to school, brushing teeth, etc., as the kids, though just a bit differently.  Some of the details in the illustration are quite humorous, like a snake used for dental floss, and there is opportunity for the kids to make various monster sounds (snarl, growl, roar, howl...).

This is a great one for breaking the ice as the very first thing the monster does is put on clean underwear, and of course any mention of underwear will be followed by lots of giggles, and I like how it ends showing that even monsters can get scared of the dark and need a good-night kiss from their mothers.

After this we got to pretend to be monsters even more with this song, inspired by Ed Emberley's book of the same name:

If You're a Monster and You Know It

Smack your claws (clap hands), stomp your paws (feet), twitch your tail, wiggle your warts (face), give a roar, do them all, sit back down. 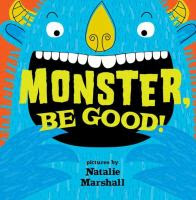 Again, we ended sitting back down, ready for the next book, Monster, Be Good! by Natalie  Marshall. I selected this book for several reasons: the illustrations are cute, just the right amount of text, can be made interactive, empowers kids over the monsters, and reinforces appropriate behavior.

I especially liked the part where it says if a monster is being mean to just walk away and say good-bye, which is a great strategy for dealing with other kids who are not playing nice. I have the kids to repeat all the lines of telling the monsters to do something. I also like the book has a calm ending, with telling the tired, grumpy monster to go to sleep, then giving him a kiss (I have the kids blow kisses) and say "Goodnight".

Since both books are pretty short and have the theme of giving kids power over the monsters (and thus, their fears) I went straight to Ed Emberley's classic Go Away, Big Green Monster!

I don't know anyone who doesn't love this book. It is fun, with it's die-cut pages gradually building the monster's face, then gradually eliminating it as well, and I like that it gives the child the power to tell scary things to go away (and a good opportunity to remind them that monsters aren't real, just a product of our imaginations, therefore they can make them go away, too). I like to let the kids fill in the blank, naming each facial feature as it's added, and then have them repeat all the "go away's".

I closed with the "Storytime Is Over" song, and then put out the supplies for the optional craft and/or activity.

Since I haven't had great participation in the craft, nor much time to prepare things, I decided to try an activity instead. Since we had several monster puppets, I thought the kids would have fun playing with them instead. We had the following puppets:
Then since there were not enough puppets for every child, I also had a very simple "craft" activity with monster sticker sheets that had a monster body and many assorted parts, so they could design their own monsters. These were very inexpensive, about $8 for 24 sheets in 4 designs, and I gave them paper to put them on, crayons to add any additional scenery or details, and googly-eyes and glue to jazz them up a little.

How It Went
I still had some of the issues inherent to the time and location, but it was better. This storytime is challenging for a couple of reasons. First of all, it is on the weekend and does not have a regular audience. We see different families every week, and 99% of the time they had not come specifically for storytime, but just happened to be there, so they don't necessarily know what to expect, how long it will be, and often have other things going on, so they don't stay the whole time. The other is that it is in a open area, with the play area right behind, so the kids are distracted by the toys and by hearing other kids playing.

Because of these factors, there is always a lot of movement, and people coming and going throughout the storytime. I understand it, but I still find it incredibly distracting, to me and to those remaining. It often starts a chain reaction, and I think I would have much better participation if we were in a separate room, away from the distraction.

But, while there was a lot of coming and going, I did not have several families leave en masse right after the first book as had been happening, so I think letting them know up front there would be more than one story helped with that. Also, I had several stay around for the puppet play and sticker activity, though it seemed they were more interested in the sticker activity that in playing with the puppets, which is the opposite of what I expected. But they were happy, so that's fine with me. I do think I need to up my game somehow with the after storytime activity, but I'm still working on that.

Beyond Junie B. - Intermediate Series with Spunky Female Characters