The Ups and Downs of Library Programming 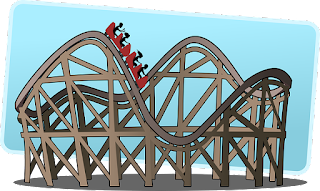 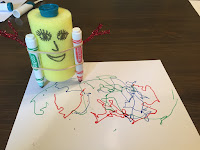 On Wednesday we repeated my "DoodleBot" program from last year. This program uses the motor from cheap electric toothbrushes, pool noodles, and markers to build a simple "robot" that creates art. When I did this program last year, it was a huge hit. There was a little bit of troubleshooting, but it was not a major issue, and it has been my most popular blogpost.

This time around, we had lots of problems. To start with, it was a much larger group (35 versus 10), probably too large for a program of this type, that is a little more complex and sophisticated, and prone to bugs. Second, we were expecting 35 kids, but they were supposed to have several teen aides to help, along with the camp director and the three of us from the library. So, we thought we would have enough help and supervision to handle a group this size. But, then the teen counselors decided they wanted to make their own DoodleBot, which brought our number of particpants up to 40, and reduced our "adult" help to 4, and stretched our very limited supplies past what we were prepared for. 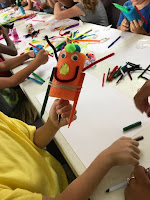 Then, after the kids finished personalizing their bots and were ready for the motor, at least half the motors wouldn't work right! For some reason, the connections were being much more finicky that before, and were loosening or shifting just enough to break the flow of current through the circuit. This had happened before, but not to the extent it did this time. The motors would only work intermittently, and this particular group was not as good at problem-solving on their own as the previous, so were constantly getting upset and asking for help. It was a very frustrating experience for me, the kids, and my co-workers, and I felt completely defeated.

I still do not understand why we had so much more trouble this time around. The bot prototype I made that has been sitting on my desk for a year still works fine. So, I have a lot of trouble-shooting and creative problem solving ahead of me with this one.

Since we did not really have enough motors left because of the extra participants, and I didn't have enough time to get them all working again, I decided to change gears at the last minute for Friday's program at a different location and do my "Mirror, Mirror" program, which has the demonstration of a couple of cool special effects using mirrors and reflection, followed by making kaleidoscopes. For complete details, see my previous post.

I LOVE this program! It is very cheap, uses easily obtainable supplies, relatively easy, no complicated prep, it really can't go wrong, and the kids really like it! So yesterday I quickly got everything together, and the program was a big hit. At first I could tell the kids (16 kids around ages 8-10) weren't thrilled to have to put away their games and come sit at the tables for the program, and were thinking "this is going to be lame". But when I showed them the mirascope's holographic image projection and the infinity mirror, they started coming around. 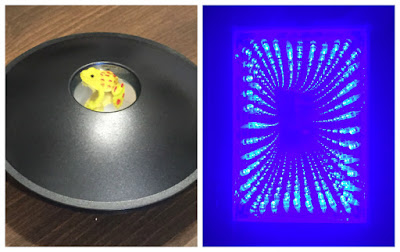 By the end, we heard exclamations of "So cool!" over and over, and several asked how long we were staying and if we were coming back next week! They were trading back and forth, looking at each others' designs and patterns. I really like how all their kaleidoscopes looked different, and that no matter how much or little time they put in their designs, they still looked cool when you looked through the kaleidoscope. Here are some of their kaleidoscopes: 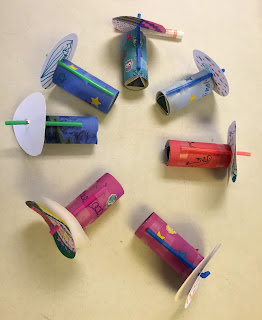 And here are some of the images they created (if you look closely at the second one on the bottom row you will see a dinosaur in the pattern): 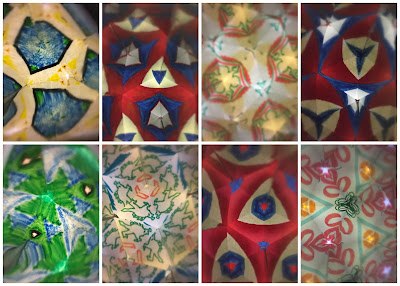 I am so glad I got to end the week on a positive note, but I am still really bummed and frustrated that we had so much trouble with the Doodlebot program after it worked well the previous time. If you want more details and step-by-step of what we did, check out my previous "DoodleBot" and "Mirror, Mirror" posts.

Now, off to take a nap, then relax and read a book before I tackle trouble-shooting tomorrow...
Posted by Jen at 2:30:00 PM