I had a last-minute idea to make this a full-fledged "Reindeer" storytime rather than a general Christmas one, but of course I had waited too late, and there were no suitable reindeer stories to be found, so I stuck with the original plan. 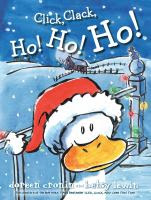 We started with our welcome song, then talked about Christmas a little bit, and sang our story song, with a couple of special Christmas verses added (say "Ho, ho, ho!" & say "Merry Christmas"), and settled down for our first story, Click, Clack, Ho! Ho! Ho! by Doreen Cronin and Betsy Lewis.

This is a good book for groups that are less attentive as it is relatively short, little text, but a fair amount of action going on. Kids can identify the animals, predict what's going to happen when the next ones go up, say the "Ho, Ho...Oh, No!", and predict whether Santa will get stuck or not. This has been very well enjoyed by every group I've ever read it to. 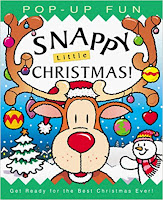 Since they did such a good job of listening and staying engaged with the first book, I decided to go straight to the second book and save all the songs and flannel until the end ['If it ain't broke, don't fix it' is my motto!].

Since this group needs highly interactive books, I decided on the Snappy Little Christmas book with it's pop-ups and bright illustrations (though the pop-ups are not quite as impressive as some of their other books as they don't really have as much"pop" or movement). There is a snowman, reindeer, angel, tree, carolers, penguins, and of course, Santa! One thing that I think is funny and always point out is that the reindeer (who, while unnamed, must be Rudolph as it has a red nose) has ornaments hung all over its antlers.

Next we did a great flannel activity I found a few  years ago that the kids all love:

The more I ham it up, the better they seem to like it! Each time I try to convince them that whatever color I have is good enough, and of course they always insist we have to keep trying. Usually they cheer and applaud by the time Rudolph *finally* gets his red nose.

After that, I said that since we just helped Rudolph find his nose, and Rudolph was in our book, and Rudolph was on my sweater, that I thought we needed to sing Rudolph's song; they readily agreed. So, we sang "Rudolph the Red-Nosed Reindeer", then sang it again because the kids didn't know all the words and motions well enough to do the whole thing the first time and faded out very quickly after the initial "Rudolph, the red-nosed reindeer..." They did much better the second time.

Then I said "Let's sing another Christmas song. Listen, and see if you can guess which one I'm thinking of..." and gently jiggled my bag to make the jingle bells I had brought ring softly. Immediately their faces lit up and they all yelled, "Jingle Bells!" I don't think there's anything better to them than singing "Jingle Bells" with actual bells.

We sang it twice, just repeating the first verse because I don't know the others well enough, and since they were enjoying the bells so much, I also played "Jingle Bell Rock" and we all danced along.

I was tempted to do either another song or book because they were doing so well, but I just had a gut-feeling I would lose them if I did, so I decided to quit while I was ahead! We sang our closing song, then I told them about the bags of special "Reindeer Food" (oats, colored sugars, & sprinkles) I was giving their teacher to give them to take home, and how they should sprinkle it outside on Christmas Eve for the reindeer, then passed out stickers.

I was a little concerned about how they would be today since it had been a month since I'd seen them because of the Thanksgiving holidays and mandatory training I had to attend. But they were really good and we all had so much fun! They loved Click, Clack, Ho! Ho! Ho! and wondering what the duck was up to. This class surprised me, as most kids think Santa will get stuck, too, like everyone else, but they were all sure he wouldn't. They also liked the Rudolph flannel board and song, but I have to say, the highlight for them was getting to play the jingle bells!

Now, I'm sure some will look at this and immediately judge and disapprove that I did a Christmas storytime, but my response is that I am here to serve the needs of my patrons and my community, and this was an outreach storytime to a church-sponsored daycare who incorporates Christianity into their curriculum and had not only approved, but requested the holiday theme, and it was enjoyed by all.
Posted by Jen at 1:55:00 PM