Sometimes It's Just A Hokey-Pokey Day 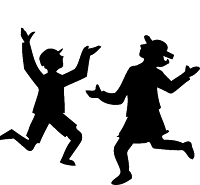 Ok, so you are well-versed in the principles of ECRR and storytime planning in general; you have an established beginning routine, you've selected some really great books, chosen some fun songs, rhymes, and a great flannel board activity. Things start out okay, but quickly disintegrate. Or maybe you can sense the energy level is all wrong as soon as they come in.

So, what do you do when it isn't working?? Here are a few things to try*:

So the bottom line is, trust your instincts, don't feel like you have to force something that isn't working, and don't beat yourself up for a bad day or needing to end early. It likely has nothing to do with you!

*I based this on my experience with preschoolers; obviously expectations should be developmentally appropriate and would be a bit different for toddlers.
Posted by Jen at 1:34:00 PM