I had a pretty busy weekend; no storytimes, but it was all related to children's books.  First up, a special first birthday cake for the son of the children's librarian who first hired me at the library as a page.  The theme for the party was Mo Willem's "Pigeon", specifically from the first book, Don't Let The Pigeon Drive The Bus.  I used the book for inspiration, but took a little artistic license.  I used a technique called "frozen buttercream transfer", which is not difficult and is perfect for reproducing cartoon-ish characters on cake.  Several tutorials can be found online if you'd like to give it a try. 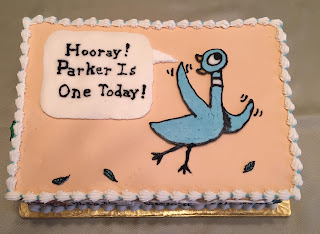 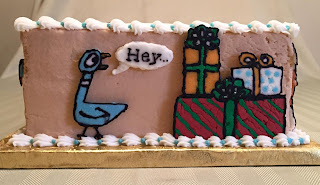 Then the library I work for hosted a Halloween "BOOktacular" fundraiser that my husband attended with me, and he wins the good sport award for wearing this costume: 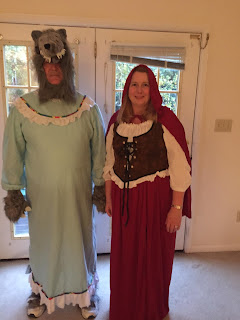 If it's not obvious, we were Little Red Riding Hood and the Big Bad Wolf.  I really did try to find something simpler for him, but I only found out the day before I had won tickets to the event in the staff drawing and had very little time to look for costumes due to working on the cake above.  Plus I wanted us to coordinate and be literary characters, and the costumes had to be tasteful and be large enough for two non-skinny people.  Finding costumes that fit all 4 criteria was no easy task, especially with only an hour or two to do it, so this was the best I could come up with.

I had a purple crayon costume and thought about just letting him wear blue sweats and being Harold And The Purple Crayon from Crockett Johnson's classic book, but I didn't think many people at the event would get it, other than the 1 or 2 children's librarians that might be there.  I would have liked to have done something more creative, but there was just no time.  Everyone got a kick out of the Wolf, though, and many complimented him on being a good sport.  His only condition was that no one from his work could ever see this picture!

Not to be left out of the fun, my cat Toby also dressed as a literary character (even though he did not attend the gala): 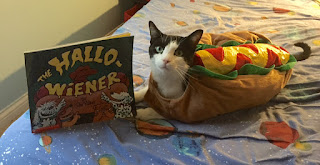 I guess he deserves a "Good Sport" award, too.  He really doesn't mind costumes too much, and doesn't he look cute?  This was one of my daughter's favorite books as a child, so I know she will love seeing Toby in his costume when she comes home from college next weekend, which happens to be Halloween.

Email ThisBlogThis!Share to TwitterShare to FacebookShare to Pinterest
Labels: Miscellaneous