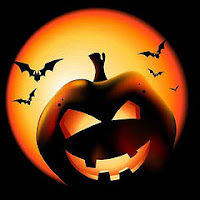 We had some spooky good fun in storytime the last two weeks with our Halloween theme.  For this theme, I found I tended to use the same few books over and over because they worked so well.  I generally used 2 or 3 of the following books with any given group, depending on their ages and attention span. 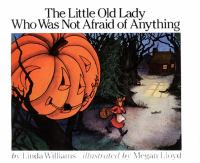 The Little Old Lady Who Was Not Afraid Of Anything by Linda Williams has become a Halloween classic; a favorite of children's librarians, teachers, and children alike.  It is a perfect Halloween read-aloud because it is just spooky enough without being too scary for little ones, and is very interactive.  I absolutely loved reading this book, so much so that I bought my own personal copy to be sure I always had it available for storytime.  Even the classes who had already read it before I came to see them wanted me to go ahead and read it again most of the time.  I highly recommend it. 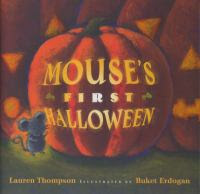 Another book I used frequently, especially for the younger classes, was Mouse's First Halloween by Lauren Thompson.  I like all the books in this series, and this one was good for letting the kids guess what the things mouse encountered were, without being so easy that the kids would yell it out the second I turned the page.  I also like that it showed how things may seem scary at first, but then they really aren't. 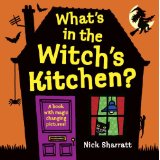 Snappy Little..... pop-up books are always a hit of course, and the Halloween one was no exception.  What's In The Witch's Kitchen? by Nick Sharratt is a neat lift a flap book with each flap being able to be opened from two different sides, with one revealing something yummy like toffee popcorn, and the other something yucky like slimy frog spawn, using rhyming (or almost rhyming) words.  One caveat, two of the pages show goblin's pee and rabbit poop, which of course the kids think is hilarious, but some adults might object to. 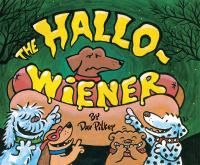 Another classic is The Hallo-Wiener by Dav Pilkey.  This book is very funny and employs several obvious (to adults) hot-dog related puns as it tells the story of poor Oscar the Daschund who was teased by the other dogs, but becomes their hero in the end.  This is a great book, but best used with older kids as it is slightly longer, and younger kids will miss a lot of the humor. 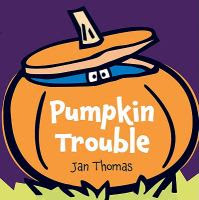 Pumpkin Trouble is another humorous book from Jan Thomas, this one telling the story of how poor Duck got stuck inside the pumpkin he had hollowed out and is mistaken for a pumpkin monster by his friends.  I like this book, but sometimes felt I had to do too much explaining for the kids to get what was going on and why it was funny, so it might be better for slightly older kids. 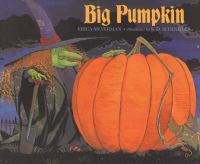 Big Pumpkin by Erica Silverman has a witch trying to pick her big pumpkin to make pumpkin pie, but she is not strong enough.  One by one other creatures try and fail, until the little bat suggests they all work together.  This story is cute and and has a great message about working together, but there is a lot of text so it is best paraphrased for younger listeners.  This would be great for telling as a flannel board story as well.

For activities, I stuck with the same two all week, doing one or the other, or sometimes both, depending on the group, which books we read, and how much time we had.  The first was the classic "Five Little Pumpkins" action rhyme:

How It Went
As expected this theme was a lot of fun, and for the most part, went really well.  Everyone loved The Little Old Lady Who Was Not Afraid Of Anything, even if they had heard it already, perhaps even more when they had heard it before.  What's In The Witch's Kitchen? was also a big hit, and though I was hesitant to use it at first for fear some adults might not appreciate the goblin pee or rabbit poop, no one objected when asked.

The "Little Ghost" rhyme was a lot fun and enjoyed by all.  I used our movement scarves for the ghosts as I thought using 700 napkins or tissues over the course of the 2 weeks was a bit wasteful.  The scarves were nice and airy and "float-y", and no one complained that they weren't white, though I did have to remind them we were not going to be choosy about colors and "You get what you get, and you don't have a fit".  (I did wash the scarves after getting that much use).

I have also started doing a "Letter of the Day" after realizing how poor a lot of these kids' letter recognition was, just using the first letter of the theme, so this time it was "Hh" for "Halloween".  I just worked it into the introduction, asking them if they knew what the first letter was, showing them the letter, talking about what sound it makes, and a few other words with the "h" sound.

One day I ended up with a small group of non-English speaking kids, which was a challenge.  I did a simple lift-a-flap and the Snappy book, where they would say what it was in their language (not sure what it was; they were from Africa, but teacher didn't know which country), then I would say it in English and have them repeat (i didn't try to read all the text).  They seemed to enjoy it and giggled at every picture.  I did read "Mouse's First Halloween" so they would get some exposure to the sound, rhythm, and language of a story, even if they didn't understand it.  Then we ended with "Little Ghost".  Though they probably didn't have any concept of Halloween and didn't recognize some of our "classic" monsters, like the vampire, mummy, and Frankenstein's monster; ghosts, witches, skeletons, and pumpkins are apparently pretty universal.

Unfortunately for me, the theme ended on a bad note when I visited my usual group that I do on my own (not with the Storytime Bus) today.  They. Would. Not. Settle. Down.   They were way too wound up, which I had feared would be the case with today being Friday, the day before Halloween, and the day of their class party.  They kept asking for stories, but then would not be quiet and listen, and just kept talking and talking and talking.  I did a longer than usual intro routine with lots of movement, gradually working down to sitting quietly, but it didn't help.  Lesson learned:   don't try to do storytime they same day they are having any kind of special event!  It's just too frustrating and not productive.