With our Storytime-To-Go outreach program, we normally do each theme for 2 weeks.  We actually started the "Monster" theme back in early October, but had to interrupt it so we could get in the "Halloween" theme at all locations before Halloween, so we finished up the second week of "Monsters" this week, and this was such a fun theme!

Go Away, Big Green Monster! by Ed Emberley was definitely my go-to book for many reasons.  It is fun, can be made very interactive (I let the kids say the name of each part, then repeat all the "Go Away"s), and I also like that it empowers kids to face down their fears and tell the monster to go away, and take him apart piece by piece.

I also like the little brother to this book, Nighty Night, Little Green Monster.  This is very similar to GABGM, except that it features a cute little baby monster being put to bed, rather than banished.  This book is good to use with the younger kids, or kids who are really sensitive and fearful, and would make a good bedtime read as well.

Natalie Marshall's Monster, Be Good! is another book that empowers kids by putting them in charge of the monsters, as well as reinforcing good behaviors in general (I particularly like how it modeled walking away from a bully rather than engaging).  It has great illustrations, and can be participatory by having the kids repeat the re-directions, ending with blowing the monster a kiss and saying "Good Night".

Even Monsters... by A J Smith is a fun book, showing how monsters do many of the same things the kids do, like getting dressed, going to school, brushing teeth, etc., as the kids, though just a bit differently.  Some of the details in the illustration are quite humorous, like a snake used for dental floss, and there is opportunity for the kids to make various monster sounds (snarl, growl, roar, howl...).

Some Monsters Are Different by David Milgrim has cute illustrations and demonstrates contrasting terms, like "same-different," and ends with the great message that while some monsters are different, all of them are wonderful and special in their own, unique way.

If You're A Monster And You Know It, also by monster-master Ed Emberley, is a fun twist on the classic song, "If You're Happy And You Know It".  You can read it like a story, but it is much more fun to sing it and perform all the actions together as a group.  It has lots of fun sounds/actions and I highly recommend when you need something with movement!

Mo Willems' poor little Leonardo the Terrible Monster is a monster who can't seem to scare anyone, no matter how hard he tries.  He finally finds the biggest scaredy-cat in the world, gives it everything he has, and thinks he finally succeeded, only to find out the boy is crying because he's had a really bad week, not because he's scared.  This a cute story; I just wish the illustrations were a little bolder.

My Monster Mama Loves Me So by Laura Leuck is a sweet story with really great illustrations, showing how the little monster's mother loves him and takes care of him, ending with her putting him to bed.  This is a nice quiet, calming story, good to end storytime with or for a bedtime read.

Little Puppy and the Big Green Monster by Mike Wahnoutka is an adorably funny story about a little puppy who wants to play, but everyone is too busy or too tired.  He finally happens upon a monster, who wants nothing to do with him.  But, the puppy misinterprets all of the monsters attempts to ignore or get rid of him as play.

Horror writer R L Stine and Arthur creator Marc Brown teamed up to bring us The Little Shop of Monsters, just published this summer.  A funny story about a couple of kids visiting a shop with all kinds of fearsome monsters. This is a great book, but a little on the long side and probably better for older kids, like older 4's or 5's and up.

Activities
I used the version of  the "If You're A Monster And You Know It" song from the Ed Emberley book above with nearly every class to get in plenty of movement:

Additional verses:  smack your claws (clap hands), stomp your paws, twitch your
tail, wiggle your warts [you'll need to explain this first], give a roar, do them all. 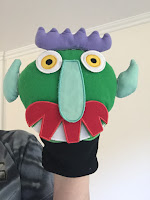 We also have a great storytelling puppet for Go Away, Big Green Monster that I sometimes used to let the kids re-tell the story after I read it to work on narrative skills and sequencing.  I would give different kids each a piece of the monster, then let the group help tell the story, and when we would get to each piece of the monster, the child with that piece would bring them up and put them on.  Then those who didn't get to put pieces on got to take a turn taking them off until the monster was gone.

In addition, we have really cool Build-A-Monster puppet that comes with a bare puppet and a huge assortment of parts:  eyes, ears, horns, noses, teeth, hair, and arms.  There were more than enough pieces to let each child have one, then I would call them up one at a time to put their piece on the puppet, however they wanted [I like activities that give me a chance to interact with each child individually].  When they were done, we would choose a name for their monster and interact with it a little bit.  Needless to say, each group's monster turned out completely different.  Here are just a few:


An action rhyme that was used occasionally when we need something quick with just a little movement was "Monster, Monster":

*I like how this ends with them sitting, ready for the next story.

And our final activity involved comparing, sorting, and matching.  We have about 12 different monsters printed out and laminated, with magnets on the back.   Each child is given one, then one is asked to bring theirs up and put it on the board.  We discuss it's features and characteristics, then choose one to focus on.  For example, the first monster may have one eye, and then anyone else with a one-eyed monster brings their monster up to put on the board, and discuss the similarities and differences.  Then we may note one has a tail, for example, and ask anyone else with a monster that has a tail to bring it up, and so on.  This is a very versatile activity that uses math and science skills of observation, counting, and grouping.

How It Went
I have to say this has been one of the most fun storytime themes I've done; right up there with "Dinosaurs" and "Sharks"!  There are so many fun monster books out there, I didn't come close to using them all.  All the ones I used were well-received, but if I had to pick favorites I'd have to say Go Away, Big Green Monster! and Even Monsters... because they were fun, interactive, and appealed to almost all ages (I see 3- to 5-year olds), with Monster, Be Good! right up there with them.  I would use any of the above again, though the Little Shop of Monsters is probably better suited to slightly older kids as it is long, I would say mature 4-year old's and up.

Our letter-of-the-day was "M".  We talked out it being the first letter of the word "monster", what sound it makes, other "M" words, and upper- verses lower-case.  Some already knew it, but many didn't, and a few understandably confused it with the letter "W".

All the activities were a hit, it was hard to choose just the 1 or 2 for each group we had time for; I would love to do a longer "Monster" program and use them all some day!  Each one had value in developing different skills:  the song and rhyme were great for movement and following directions, the GABGM puppet worked on narrative skills, the build-a-monster puppet encourages creativity and imagination (plus is just awesome fun!), and the monster sorting was great for pre-math and science skills.  All were enjoyed, but I think the build-a-monster was probably the biggest hit.  The kids really got a kick out of being able to put their pieces any where they wanted and not having to worry about doing it "right" and knowing their class's monster was unique and not like any other group's.  They all loved how crazy their monster turned out.  I just wish I had thought to take a picture of all of them.
Posted by Jen at 2:48:00 PM