And Even More Thanksgiving Stories....

During the two-week rotation on the Storytime Bus, I tried many different Thanksgiving books, but found I ended up using the same 3 or 4 because the others just didn't work as well.  There is definitely a shortage of good Thanksgiving books that work well as a group read-aloud, and I really found myself needing shorter books for the younger kids in particular.

I avoid the whole history and origins of Thanksgiving; for one, it's too complicated to try to explain to 3-year olds in a 20-minute storytime, and for another, there really aren't any good children's books that address it in anything close to an accurate and balanced way.  I focus on just being thankful for what we have in general, as that can work for any culture or religion, and the big dinner with family, food, and turkey.  With any given group, I read 2 or 3 books and did 1 or 2 songs/rhymes, in addition to our introduction, letter-of-the-day (Tt), and story song.  These are the books I used at some time during the two weeks (approximately 29 classes altogether):

Turkey Trouble by Wendi Silvano was my go-to book; it's not too long, very funny, cute pictures, and works well with a broad range of ages.  Everyone loved it!  In this story, poor Turkey is trying to avoid becoming Thanksgiving dinner and attempts a variety of animal disguises, with limited success.  But in the end he comes up with a great idea and manages to make in through Thanksgiving in one piece.

10 Fat Turkeys by Tony Johnston was my other go-to book, especially for my younger, more wiggly groups since it is not too long and is repetitive and very silly.  Count down from 10 as the fat (and very goofy) turkeys fall off the fence one by one due to their crazy hijinks.  It has rhyming verses with the repeating line, "Gobble, gobble; wibble, wobble" and bold, cute illustrations that keep the kids engaged.

This Is The Turkey by Abby Levine tells the story of a family's big Thanksgiving feast with rhyming verses in the style of This Is The House That Jack Built.  It has a funny twist in the middle when the mother trips and the turkey goes flying off the platter into the fish tank, but Max learns that the most important part of Thanksgiving is spending it together with family and friends.

Bear Says Thanks by Karma Wilson is a sweet, simple story about sharing and saying thanks.  Bears friends arrive one by one with treats to share, and the gather for a picnic feast.  At first Bear is upset because he has no food to share, but his friends remind him that he has stories and friendship to share.  Jane Chapman's illustrations are beautiful.  This book works with quieter groups, but is not engaging enough for some.

I Know An Old Lady Who Swallowed A Pie by Alison Jackson puts a Thanksgiving twist on the old "There Was An Old Lady Who Swallowed A Fly" song.  It has a fair amount of text, but the rhyme and rhythm help keep the kids engaged, and the kids love the how it grows it absurdity with each verse, and how big she gets at the end.  Many of them don't get the part about her being made into a parade float, since many have never seen one, but it isn't necessary.  I also change the line "perhaps she'll die" to "perhaps she'll cry" for the younger ones, and the kids like joining in.

The Great Thanksgiving Escape by Mark Fearing is a good, funny story best for slightly older kids, who will appreciate things like the importance of escaping all the hugging and cheek-pinching from the older relatives as Gavin and Rhonda attempt to sneak out to the backyard to play.

I love 'Twas the Night Before Thanksgiving by Dav Pilkey, which tells the story of a class of kids on a field trip trying to save the doomed turkeys in the style of the famous Christmas poem by Clement Moore.  I also liked that some of the illustrations are reminiscent of Van Gough's A Starry Night, which is my favorite work of art.  This is a little long, so better for the older kids.

In Sometimes It's Turkey; Sometimes It's Feathers by Lorna Balian, Mrs. Gumm is thrilled to find a turkey egg, and plans on fattening it up in time for Thanksgiving dinner.  But, in the end he turns out to be a guest instead of the main course.  A little long for the younger/wigglier groups.

Thank You, Thanksgiving by David Milgrim is a simple book with little text that shows a little girl being thankful for various things on Thanksgiving day as she walks to the store to buy whipping cream to go with the pumpkin pie. This was the only other short book I had that I hoped would be good for the younger kids, but it was a little too boring for most.

I am a huge fan of the Snappy Little... pop-up books and they are usually a guaranteed hit, but the Snappy Little Thanksgiving fell flat and just wasn't as good or engaging as all the others I've used.  The pop-up pictures just didn't excite the kids like usual, and the text was a little blah.  I think Thanksgiving is just a difficult subject to make exciting.

For activities, we did the rhyme "The Turkey" and the songs "If You're Thankful And You Know It", "The Turkey-Lurkey", and "I'm A Little Turkey":

I'm a little turkey,
My name is Ted.
Here are my feathers,
Here is my head.
Gobble, gobble, gobble
Is all I say.
Quick, RUN; It's Thanksgiving Day!

How It Went
I'm not sure what it was, but almost everyone seemed more restless and wiggly during the two weeks for this theme.  I don't know if it was the theme or what; I know Thanksgiving isn't as exciting as Halloween or Monsters, but I really tried to pull some fun books and songs.  Maybe there was just something in the air...  I was pleasantly surprised by several kids saying they were thankful for their brothers and sisters;  I certainly wasn't thankful for my siblings when I was that age!  There were also a number of kids who didn't know what a turkey was (thought it was a duck or chicken) and a couple of classes with kids from other cultures who weren't really familiar with Thanksgiving.  One class surprised me with a performance of "Over The River and Through The Woods", complete with actions, and they did a great job.

I was once again made aware of how hard it is to find books related to Thanksgiving that are engaging and aren't too long, and especially books short enough for the 2-3 year olds.  I definitely need to find a couple more short ones before next year.  Turkey Trouble and 10 Fat Turkeys were by far the biggest hits and worked for all ages.  This Is The Turkey and I Know An Old Lady Who Swallowed A Pie were also pretty well received.  I was disappointed that Bear Says Thanks didn't go over better as I think it is a sweet story and I love the pictures.  The Great Thanksgiving Escape and "Twas The Night Before Thanksgiving are really good, but geared more for ages 5-8, so I only used them with 1 or 2 groups.  Since I ended up relying heavily on the same 3 or 4 books, I did find I was getting a bit burned out by the last day or two.

Although the songs and rhyme I used worked well, I did get a little bored of them as well, so I plan to add a couple of new activities by next year.  I was working on a cute felt board story that I had seen on another blog that would have been a great complement to Turkey Trouble (and can be said as a rhyme or sung to the tune of "My Bonnie Lies Over The Ocean"), but it proved to be more time-consuming than I expected and I couldn't get it finished it time, so I will have to save it for next year. 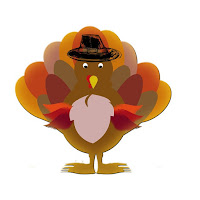