This is my first "Flannel Friday" post in quite a while! I just haven't had the time or inspiration lately, but I did manage to finish this one finally.

I was inspired to create this set by a post I saw on the slc book boy blog. I've seen this rhyme done before, but with all five turkeys disguising themselves as ducks. I loved how he changed it and had each one put on a different animal costume, and made up corresponding verses of the song. I modified it a bit and replaced his lion with a horse as I preferred to have all farm animals, and added another verse at the end as it seemed to need some closure. 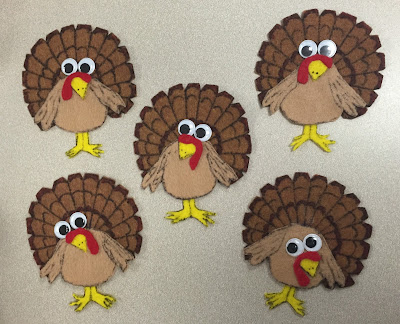 Five turkeys were getting quite nervous,
Thanksgiving soon would be back.
So one turkey put on a DUCK suit,
And now he says, "Gobble, quack, quack!" 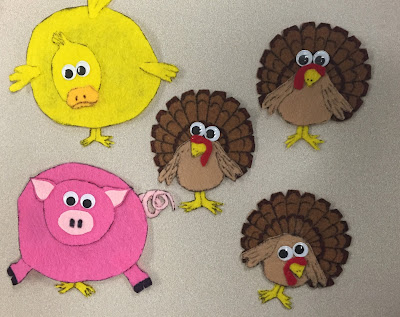 Four turkeys were getting quite nervous,
Thanksgiving was coming, not going.
So one turkey put on a PIG suit,
And now he says, "Gobble, oink, oink!"

Three turkeys were getting quite nervous,
Thanksgiving was in just a week.
So one turkey put on a MOUSE suit,
And now he says, "Gobble, squeak, squeak!"

Two turkeys were getting quite nervous,
So one of them knew just what to do.
That turkey put on a COW suit,
And now he says, "Gobble, moo, moo!" 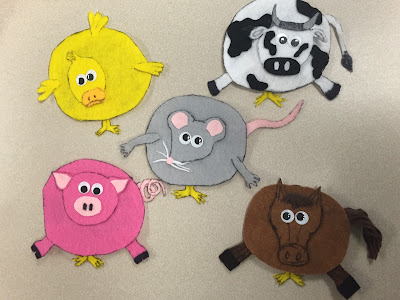 One turkey was getting quite nervous,
Tomorrow is Thanksgiving Day!
So he put on a HORSE suit,
And now he says, "Gobble, neigh, neigh!"

The farmer was getting quite nervous,
Today is Thanksgiving Day!
But he can find no turkeys,
Only hears "Quack, oink, squeak, moo, and neigh!"

I thought this would be a great activity to follow reading either Turkey Trouble by Wendi Silvano & Lee Harper, or Run, Turkey, Run! by Diane Mayr & Laura Rader. Both books feature a desperate turkey trying to avoid becoming Thanksgiving dinner by pretending to be other animals. Turkey Trouble is longer and good for older kids, while Run, Turkey, Run! is shorter with more simple text and better for younger kids. It also has the repeating "Run, turkey, run!" that you can have the kids say. Both of these are usually big hits with the kids. 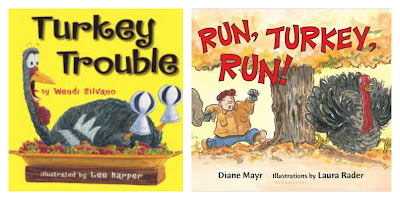 I will warn you, this set was pretty time-consuming to make; I started it last year and ran out of time, so saved it for this year. If I were to have to make it again, I'd be very tempted to just use laminated clip-art! To make a pattern for the turkeys, I just copied book boy's picture and enlarged it, then outlined in marker for patterns. For the animal costumes, I just free-handed it since they didn't have to be too realistic.

I took one shortcut and did not bother with trying to line up the heads and eyes and cut out eyeholes in the "costumes" as I thought that would be very tedious and frustrating, and I didn't want to have to worry about each costume only working with one specific turkey. So I just put more eyes on the costumes.