Do You Change The Words?


I was browsing an online group for youth services recently, and saw that someone had posed a question along the lines of "Do you ever shorten a story, or change the words?" This was in the context of wanting to read a story that had beautiful illustrations, but the text was believed to be too long and the vocabulary too sophisticated for the audience.

I have to say, I was rather surprised at how many people responded that they did often change the stories that they read. I have very mixed feelings about changing an author's words, but it does depend on exactly what kind of change you mean. 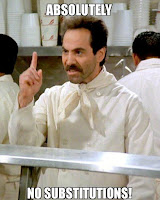 People sometimes see a word that they think is too sophisticated or too old-fashioned for their audience, and are tempted to substitute a more simple, familiar word. Please don't! This is the type of change I'm vehemently opposed to. Exposing kids to a rich vocabulary is one of the reasons we read out loud to them, and a very important part of developing early literacy skills! The more words and sounds that kids have been exposed to before they start learning to read, the easier it will be for them to sound out words as they are learning to read.

Picture books are full of words we don't typically use in everyday conversation, and this rich vocabulary of rare words is one of the things that makes reading picture books together so special, and such an important part of early literacy and language development. Explain, don't substitute! When you read an unfamiliar word, just pause and explain what it means, then go on with the story.

Another reason I've heard people give for substituting words in a story is that they don't approve of certain words. For example, some are uncomfortable with the word "ain't" because it is colloquial slang and considered poor grammar, and they feel like they should be modeling proper grammar all of the time. Others don't approve of "unkind" words like "dumb", "stupid", or "hate", and still others disapprove of slang words like "heck", equating them with swear words (I confess, I don't quite follow the logic there), or the word "butt" (even though it's simply a shortened form of "buttock", the anatomically correct name for that body part).

Substituting words simply because *you* don't approve of them smacks of censorship to me, and it seems like one is trying to impose their own values on the audience. It also feels a bit disrespectful to the author to decide we can tell his/her story better. Or maybe some presenters don't object, but fear the adults in the audience will. Personally, I feel like these could be used as a teachable moment instead. Talk about the words, and why *some* people might find them objectionable, or why it wasn't nice for the character to use them. Ask the kids what they might say instead.

Now, that being said, I do think exceptions are warranted. For example, if I can tell I'm loosing the audience, but would rather not just quit in the middle of the book because some are paying attention, I do sometimes shorten the story by paraphrasing, skipping sentences, or skipping pages in order to get through it. Or if I have a story that you know your audience will love, but it is just a bit too long, I do sometimes skip pages. I plan ahead and paper clip the pages together where I want to skip, being sure the story still flows well.

I have maybe once or twice come across a book that had a really cute idea for a story, and seemed okay at first glance, but when I actually read it aloud to kids I realize it just does not flow well at all. On these rare occasions I have found myself doing some heavy editing and paraphrasing to make the story read better, but I have mixed feelings about it. Most of the time I just don't ever use them again.

So, how do you feel about substituting words or shortening and paraphrasing?

Would any authors care to share how they feel about their words being changed?
Posted by Jen at 10:09:00 PM