I decided to continue the scary fun for the whole month of October on the Storytime Bus by following "Halloween" with "Monsters". There are so many cute monster books out there! I saw 25 groups over 2 weeks, reading 2-3 books and doing 1-2 activities each. I started each sessions with an introduction which included a discussion of monsters not being real and the letter-of-the-day ("Mm"), followed by our story song.

We had a number of fun activities with this them:; songs, rhymes, sorting, and puppets! One of my favorites is a "Make Your Own Monster Puppet" set by Melissa & Doug (available from many vendors, but Amazon has the best price). It comes with  the puppet base, and something like 30 different parts (arms, eyes, horns, tails, noses, teeth, ears, etc) that velcro on. I give each child a part (or two if a really small group) and let them come up and put it on, wherever they want to (you may have to gently deflect grown-ups from trying to tell them the "right" place to put it). I love that everyone gets to participate and each groups monster creation is totally unique! Here are some of the ones we made:

We also have a storytelling puppet for Go Away Big Green Monster. I use it either instead of the book, or to let the kids help re-tell the story following the book. Because the puppet is slightly different from the book (the face has to be the first thing to appear and the last to disappear), I don't try to get the kids to tell the story in any particular order. Due to the small number of pieces, how I do it it varies with the group size. For really small groups, each child gets  piece to put on, then I take them off. For most groups, half the class puts the pieces on, and the other half gets to take them off. For large groups, we may do it twice so everyone has a turn, or I put the pieces on and off and let the group direct the story.

The kids also had fun pretending to be monsters as we sang "If You're A Monster And You Know It" based on Ed Emberley's book of the same name:

(Smack your claws, stomp your paws, twitch your tail,
wiggle your warts, give a roar, do them all.)

And finally, we had this set of 12 laminated monsters with magnets on the back that we used for a variety of sorting activities. Sorting activities are great because they can be used to work on a variety of skills: observing various characteristics about their monsters such as color, number of eyes, arms, tails, spots, etc.; reasoning skills by deciding how they are alike or different and how to groups them, and language skills be describing their monster to the group and explaining how to groups them. 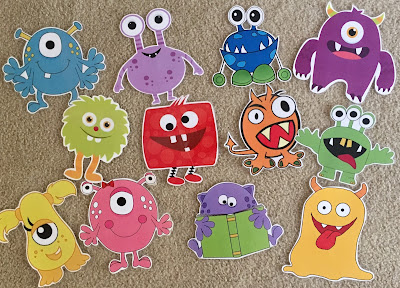 We also sometimes did the following rhyme using 5 of the monsters:

Five hairy monsters, howling out a roar,
One ran away, and then there were four.

Four hair monsters hiding in a tree,
One fell out and then there were three.

Three hairy monsters eating spider stew,
One got full, and then there were two.

Two hairy monsters having lots of fun,
One ran off, and then there was one.

One hair monster, afraid to be the hero,
He ran off, and then there were zero.

This theme was a lot of fun! Once again, Even Monsters... seemed to be the favorite of every group. It is funny, a little bit gross, and interactive with having the kids roar, snarl, grumble, growl, and howl like monsters. I always make sure they realize the monster is flossing his teeth with a snake instead of floss, and one kid pointed out the hole in the monster's tooth, saying "He has a cavity!". You can tell who's been stressing oral hygiene at home! All the other books worked well, too.

The kids all loved making their own monster puppets and then interacting with him. There are so many parts they come with it, I wish it came with two puppets! Some classes really had fun with "If You're A Monster And You Know It", but there were a few who were surprisingly lackluster about it.
Posted by Jen at 11:22:00 AM