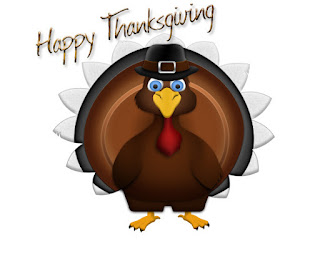 I struggled a little with deciding which books to take for my Thanksgiving storytime today.  There are not a whole lot of good Thanksgiving books suitable for storytime, and the ones I like best are a little on the longer side.  I also didn't want to do exactly the same thing as I did last year.  After this group was so out of control the last time, I wasn't sure what to expect today.  I took several books home with me, and went back and forth before finally making a decision.

Of course we started with the usual welcome song, and then talked a little about what Thanksgiving is all about.  It is really hard to get younger kids to focus on Thanksgiving; they will invariable start talking about what they dressed up as for Halloween and the candy they got, or jump ahead and start talking about Christmas and Santa and presents.  I would have liked to talk a little more about the meaning and traditions of Thanksgiving, but I could sense I was about to lose them, so we quickly moved to a song.

Then went right into:

After that, they seemed pretty ready for a story, and I reminded them how they were expected to behave (sit on bottom criss-cross applesauce, ears listening, eyes looking up front, hands in lap, lips zipped) and warned them (gently) that if they couldn't listen I would not keep reading and they would miss out on the stories. 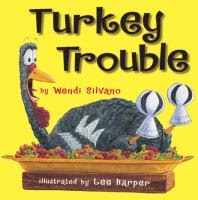 We started with one that was just a little long, but I hoped would keep them engaged with it's silly fun.  Wendi Silvano's Turkey Trouble begins with Turkey having a nightmare about being Thanksgiving dinner, followed by him trying to disguise himself as different farm animals, with only moderate success.  The kids like picking him out on each page, and love the surprise ending.  You can also let them name the different animals and say their sounds, if you like.  This is a fun book that everyone seems to like.  The cover art really hooks them, with the poor turkey's freaked out, scared expression. 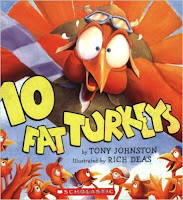 They did so well with that story, and still seem pretty settled, I decided to just go straight into the next story, 10 Fat Turkeys by Tony Johnston, since it was fairly short and also fun and silly.  This is a repeat from last year, but I really needed a short book, and could not find one as good or better.  I like that this book is fun, has rhyming verses, and counts down rather than up, which is trickier for kids this age.  I also like that it has a repeating line of "Gobble, gobble, wibble, wobble" the kids can say along with you.
After that, it was definitely time for a song with lots of movement,
and this time of year that could only mean "The Turkey-Lurkey":
You put your wattle in,        (head)
You put your wattle out.
You put your wattle in,
And you shake it all about.
You do the turkey-lurkey
And you turn yourself around,
That's what it's all about.        (clap on each beat) 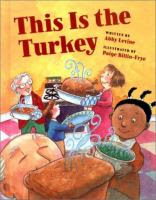 Since they had been doing pretty well, I though they might be able to handle a third book this time, so I asked them if they thought they could sit still and listen to one more story, or were they done.  The majority said they wanted another story, so I proceeded with This Is The Turkey by Abby Levine.  It tells the story of a family's Thanksgiving dinner with rhyming verses and a rhythm similar to This Is The House That Jack Built.  It is a little long in text on a couple of pages, but the repetition and rhythm helps keep them engaged, plus the funny twist in the middle.  I like that this story has humor, but has the message that having everyone together is the most important part of Thanksgiving dinner, and it can be a great day even if the turkey has an unfortunate mishap.f

Then we finished with our closing song, and turkey stamps.

How It Went
Today went much better than last time!  I was pleasantly surprised to find them already sitting in the floor waiting for me when I got there.  Though I still had a few individuals who I had to keep redirecting because they couldn't sit still, were turning around, bothering their neighbors, overall the group did much better as a whole and I felt like I was able to maintain control this time.

They all loved Turkey Trouble, and finding Turkey on each page and critiquing his disguise, and they really loved the ending.  This is a really cute, fun book that seems to work for everyone, from as young as 3 on up.  The also liked the incredibly silly and goofy turkeys in 10 Fat Turkeys.  While they weren't as exuberant about This Is A Turkey, because it is a calmer story to begin with, but they seemed to be listening, and though they started drifting in the middle, the dropped turkey flying off the platter and into the fish tank definitely regained their attention.  They really had fun with "The Turkey-Lurkey" song and all the movement.

I only had one real negative experience today.  They have gotten spoiled by me giving them either hand stamps or stickers at the end, and often interrupt during storytime to ask about them (sometimes I wish I hadn't ever started it!).  Today, after the second story, one little girl jumped up and rushed up to me and demanded "Now give me my sticker"!  I've never seen any of them act like that, and was quite honestly very shocked at her rudeness, and so was her teacher!  I told her sternly, "Victoria!  That was not nice at all," and her teacher immediately called her over and told her how rude that was, then at the end when it was time to give out stickers she had to wait until everyone else got theirs first.