When I started with the Storytime-To-Go program, several kits had already been developed, including one for "Cats" and two for "Dogs". I really didn't want to spend an entire two weeks reading stories JUST about cats, or JUST about dogs, so I pulled a few good books from each and added several books that were about all kinds of pets and some with unusual pets.

I saw an average of 5 groups each day, starting each session with our "story song" and Letter-Of-The-Day (Pp), then reading 2-3 books and doing 1-2 songs/activities with each. Each session runs 20-30 minutes, depending upon whether the class arrives on time or not.

*For older kids I would also suggest Dr. Seuss' What Pet Should I Get?, and Emma Dodd also has one called What Pet To Get I wanted to use, but was checked out.

Being a Big Bang Theory fan, of course I had to do "Soft Kitty", the song Sheldon wants when he's sick:

I also had an action rhyme that lets the kids get some movement in, imitating different animals, and ends with them sitting down, ready for the next story. 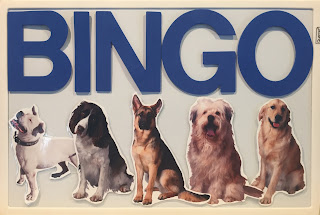 I did a little twist on the traditional version. We would repeat the song 5 more times, and with each verse I would remove a letter, starting with "B". But instead of clapping in its place, I would replace the letter with a dog on the board and have the kids bark instead.

In addition to the above activities, I used the tunes to "Wheels On The Bus" or "If You're Happy And You Know It" to have them do songs with different animals and their sounds or motions on the first day, but the kids seemed a little bored with them as we do use them fairly often, so I avoided them and only used the other activities the rest of the rotation.

Kids love animals and any animal theme is usually a hit, and this was no exception. The kids all loved sharing about their pets, and it was very interesting to hear about some of the unusual pets they had. While most of them had dogs or cats, there was an occasional rabbit, bird, frog, or turtle, and I had one little girl insist she had a pet penguin and a couple of other kids who were adamant they had a pet elephant at home!

All of the above books worked really well, but some of the favorites were Ah-choo!, The Grumpy Pets, The Doghouse, and Hieronymus Betts and His Unusual Pets.  Hieronymus Betts is a particular favorite of mine as well, and those of us with little brothers especially appreciate the humor. I was slightly surprised that a couple of kids correctly predicted that one of the fish in Cats Are Cats was going to turn out to be a big shark, and they all had fun sneezing along with Ah-Choo! Some of the kids were familiar with "Soft Kitty", and all enjoyed acting like all the different animals in "Can You?" and barking like dogs with "B-I-N-G-O".

I had one really sweet girl compliment me on my skirt and earrings when she first came in, then sidle up to me before she left and tell me I was "really pretty", which of course made my day. On the last day one little boy cracked all the adults up as I was reading Melissa's Octopus and Other Unsuitable Pets. When I got to the chameleon, he broke out with "Karma, karma, karma, karma, karma chameleon..." For you youngsters, that's a song by Boy George and Culture Club from the 80's; I have no idea how this 4-year old knew it!