Polar Animals, or Pengins Do NOT Live At The North Pole!


Since it is so hot and miserable here in late July, I decided to take a mental break from the heat and talk about animals that live where is is cold and icy year-round (or nearly year round), mainly polar bears and penguins.

Which brings me to one of my pet peeves, the misconception most people seem to have that polar bears and penguins live in the same place, when in truth, they live about as far apart as possible!  Polar bears are found in the Arctic, where the North Pole is. However, penguins are found in the Antarctic, or South Pole region (and other areas in the Southern Hemisphere). There are no penguins in the northern hemisphere (except in zoos and aquariums). Some people seem to think "Arctic" is a general descriptive term for any place that is cold and icy; however, it denotes a specific geographical region around the North Pole.

So I began each session by introducing the topic and the letter of the day, "Pp". Then I brought out a globe, and showed them first where we live, then where the Arctic circle around the North Pole is and explained that's where polar bears and lots of other animals, even some people live. Invariably someone would pipe up and add Santa. Then I would show them how we would have to go all the way down to the bottom of the earth to find where the Emperor penguins live, in the Antarctic around the South Pole. I also explained that no people live there because it is even colder and more icy than the Arctic.

After our story song, I read 2-3 books and did 1-2 activities with each group in our Storytime-To-Go program.

In Good Morning, Little Polar Bear by Carol Votaw and Susan Banta we get to see many different Arctic animals as the little polar bear cub wakes up and greets all his friends, including the puffin, Arctic fox, Arctic hare, Arctic wolf, walrus, harp seal, otter, and the very unusual narwhal. The story is told with a series of rhyming quatrains and charming illustrations.

For the younger, more wiggly groups, Tad Carpenter's Who's That? Arctic Animals introduces several arctic animals in a fun lift-flap guessing game.  Each spread gives a few clues, and shows a small part of the animal, then when you lift the flap the whole animal is revealed.

Panda & Polar Bear by Matthew J. Baek is a sweet story about friendship. The polar bear cub accidentally falls down the snowy cliff, landing in a muddy patch in the jungle below. He meets a panda bear and discovers that you can be friends even if you're different. But, how will he get back home? A little long, but a cute story with watercolor illustrations.

Polar Bear's Underwear by Tupera Tupera is just great silly fun, and the only funny book I could find for this theme. Poor Polar Bear can't find his underwear, and his friend Mouse helps him look. The design of each pair of underwear they find gives a clue to its owner. After the audience guesses, lift the flap to reveal who each pair belongs to, leading up to a funny ending.

Polar Bear, Polar Bear, What Do You Hear? is another fun book from Bill Martin, Jr. and Eric Carle with bold, bright, slightly abstract illustrations of many different animals for the audience to identify and imitate their sounds, and a rhythmic text. At the end of the book, go through and have the audience tell whether each animal is a polar animal or not, and if not where they are from.

Animal Babies In Polar Lands by Jennifer Schofield is a non-fiction book with beautiful photographs of adorable baby animals from the polar regions and their mothers for the audience to identify. However, almost all the animals are from the Arctic, with the exception of the penguin, so be sure to make the distinction clear.

One Day On Our Blue Planet: In The Antarctic by Ella Bailey is the only book I could find that focuses on animals in the Antarctic by following a little Adelie penguin chick's journey. I like that it distinguishes between the animals found on the ice versus animals that are found in the sea and clearly illustrates that there are no land mammals in Antarctica, while there is much greater diversity in the sea. My only complaint is the illustrations are rather busy.

If You Were A Penguin by Wendall and Florence Minor illustrates various types of penguin habitats and behaviors, with bold, colorful illustrations. There's a list of penguin facts at the end, followed by a key identifying all the species shown in the story. I like how this shows the diversity of penguin species, and that they don't all live on the ice (in fact, only 6 of the 17 species are in Antarctica).

Salina Yoon's Penguin series tells several different stories about Penguin and his friends that feature bright, bold illustrations with heavy black outlines that I favor for the younger kids in particular. The storylines are usually sweet with a touch of humor.

In Penguin On Vacation, Penguin is tired of the cold and ice and decides he wants to go somewhere tropical for vacation. But once there, he finds that his usual activities don't work on sand. Luckily, Crab shows him all the fun things to do at the beach.  In Penguin and Pinecone, he befriends a lost pinecone, but realizes he must help Pinecone get back to the forest where he belongs. When he returns to visit Pinecone, he is in for a big surprise!

I had two flannel board activities, a song, and then of course we did some penguin waddling just for fun! 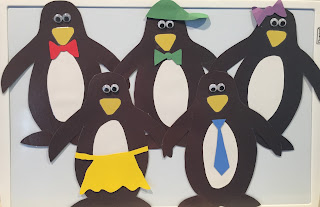 One little penguin...feeling very blue,
Called for his brother, then there were  (two).

Two little penguins swimming in the sea,
Called for their sister, then there were  (three) .

Three little penguins waddle on the shore,
Called for their mother, then there were  (four) .

Four little penguins learning how to dive,
Called for their father, then there were  (five) !

I know a little penguin,
Who sat on some blocks.

He swam in the ocean,
And he climbed on some rocks.

He snapped at a fish,
Oh, what a meal! 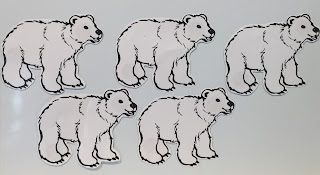 Five little polar bears, playing near the shore.
One tumbled in, and then there were  (four) .

Four little polar bears, swimming in the sea.
Once chased a seal, and then there were  (three) .

Three little polar bears, what shall we do?
One went swimming and then there were  (two) .

Two little polar bears playing in the sun.
One took a nap and then there was  (one).

How It Went
While the kids really liked the idea of polar bears and penguins and thought my puppets were really cute, their response to the books was a little lackluster. While the books weren't bad, I think I really needed at least a couple more funny books, and a couple of truly engaging stories to help balance out the more superficial, sweet stories and books that just showed different animals. A couple of the groups specifically requested funny books, and I only had the one. I don't think I'll repeat this theme until I know of a few different books to use.

Polar Bear's Underwear was predictably a big hit, and they seemed to really like Polar Bear, Polar Bear, especially since they were all familiar with Brown Bear, Brown Bear.  Salina Yoon's Penguin books were also well-received. Of course they all liked waddling around like penguins.

I also wish I had known about "The Narwhal Song"!  I knew of "Baby Beluga", but had never heard of a narwhal song until my son told me, after the fact of course. It is fun and has a fast, catchy tune, but you do have to be careful which version you use!  Some are not appropriate for children, but this one should be: