Shapes All Around Us


While I try to incorporate shape recognition into storytime when I can (as well as colors, numbers, letters, and other concepts), I had not yet done a whole "Shape"-themed storytime yet this year, so I decided it was time for one. [Since shape recognition is often lagging behind other concepts, and some 3-year olds I see really don't know any shapes, I do like to do a whole storytime on shapes each year since they are not incorporated into books, songs, and rhymes nearly as often as counting and colors.]

We started with our welcome song, followed by our story song. For our first book I chose a little gem that I snapped up from a cart of books the children's department was discarding from their office storytime collection (I'm in outreach), Make A Change: Shapes by Margot Thompson and Geff Newland. This is such a fun book for talking about shapes, with wheels to turn, tabs to pull, flaps to fold, and pop-ups! 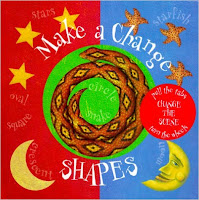 Watch as a snake slithers out of the page to coil into a circle, an chick hatches out of an oval, a rainbow arc appears, a triangle roof tops a fairy cottage, and discover a pyramid (square base and triangular sides) complete with a mummy in his rectangular sarcophagus, followed by sea stars and the Man-In-The-Moon! Even the endpapers have something to offer; the front has several shapes that can be magically turned into a different shape by folding in the flaps, and the back offers a turning wheel that reveals different shapes to identify. (Unfortunately, there were very few copies of this book sold in the states, and it is now out of print).

We continued the fun with a song that is also a shape guessing game:

At the end of each verse I would hold up a different shape (cut out of craft foam). I had a circle, square, triangle, rectangle, oval, heart, star, and diamond (I'd like to add pentagon, hexagon, and octagon). I pointed out the similarities and differences between the circle and oval, square and rectangle, and that a triangle had 3 sides. We talked about how the heart was a special shape because it meant love (to tie in with Valentine's Day, which was earlier this week, and our stickers). I ended with the star and diamond, and told them I bet they knew a song that had those shapes in it. Some of them said "no", but a few quickly put it together, and then we sang it:
"Twinkle, Twinkle Little Star"

Since our songs did not have a lot of movement in them, I had everyone stand up, give a good stretch and shake their wiggles out, before quieting our bodies and sitting back down for the next story. 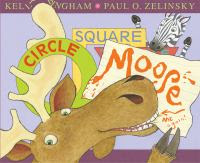 Our second (and final) book was a really fun, silly one that I just happened to come across straightening up the stacks a couple of weeks ago, Circle, Square, Moose by Kelly Bingham and Paul Zelinski. This book starts out to be a simple, straightforward shape book, illustrating various shapes with everyday objects, until Moose decides to insert himself into the story, painting out some words and adding "Moose" in their places and running amuck.

He eats the sandwich that was supposed to show a square, brings along a cat, gets everyone tangled in the ribbons that were supposed to show curves, and ruins the story. Even Zebra can't get him under control, and sadly laments that the story was ruined and has no ending. But, Moose manages to partially redeem himself by coming up with a rhyme for the last shape to end the book.

Then we sang our closing song and passed out stickers, which were special "I Love My Library" stickers in honor of "Love Our Libraries" month. I pointed out to them how each sticker had three shapes: the square backing, the round sticker, and the heart in the center.

How It Went
We had a very fun, slightly boisterous, storytime today! Who knew shapes could be so exciting? This group always loves calling things out, and I have noticed every time I've done the "Do You Know What Shape This Is?" song with this class (even with different kids each year), they tend to get louder and louder with each successive shape. I shut the door as a precaution, and tried to rein them in, but they just couldn't contain themselves. But, I'd rather have the problem of too much enthusiasm over a group of kids who just stare at you with blank faces while you can hear crickets chirping any day!

They really liked the first book, and I remembered just as I was about the bring the snake out that their teacher really hates snakes and won't even look at them. This is well-known among the kids and they LOVE to indulge in a little good-natured torture by making sure to show her EVERY picture of a snake they see, so they all laughed when they realized what it was. But then some of the kids decided they didn't like the snake that much, either, and thought I should unwind it back inside the page before moving on. They were amazed by everything that appeared, especially the mummy. It is such a shame this book is almost impossible to find now, even used. I'm glad I was able to get my hands on a copy.

They absolutely loved Circle, Square, Moose and really got into it; I had a lot of fun doing it as well. This is probably one that most people would need to practice a little first to really make the most of it, and would be great to do with a partner voicing the moose (especially if they were wearing antlers!). They kids laughed and giggled so much, and got a kick of being able to tell Moose to get out of our book, and I was glad to see they recognized how wrong is was to write (or paint) in a book. I only read two books this time since this one is a little on the longer side, and even though the first one is short, it always inspires a lot of discussion.

As I was leaving, one little boy ran after me, saying "Wait, you gotta give me my hug!" Have I said how much I love preschoolers? I do like to do programs for other ages as well, but it's hard to beat the innocence, enthusiasm, and adoration of preschoolers!