No Theme, Just Lots of Fun with New Books!


I knew I wanted to use an awesome new book, Chicken Story Time, this week, and at first I toyed with doing a whole chicken theme, but then I saw a couple of other new picture books that looked like a lot of fun that I really wanted to try, so once again I went theme-less! 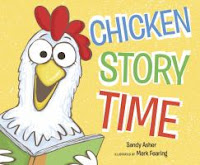 So after our welcome song and story song, we dove right into Chicken Story Time by Sandy Asher and Mark Fearing. So this story starts with one chicken deciding to drop in on storytime at the public library. But then, the next week more chickens come, and the following week even more chickens come! What's a librarian to do?? The story is cute, and the illustrations are wonderful, clearly conveying what it going on. I can't imagine a children's librarian or storytime attendee that wouldn't love this book!

And I can't imagine following a chicken story with anything but Laurie Berkner's "I Know A Chicken", with shakey eggs, of course! This song is so catchy and fun, I've yet to come across a kid or adult who didn't enjoy it. I especially like that it is a call-and-response type of song, making it easier for the kids to sing along, and gives directions like shake them fast, slow, in a circle, etc. If you're not familiar with it, here's her video:

Up next was a picture book for the grammar-police among us that I found hysterical, but
was a little unsure if kids this age would get it, especially after my mentor said it didn't go over so well when she read it to a kindergarten class. This is technically not new, as it was published in 2015, but it is new to our collection so was on the "new" shelf. 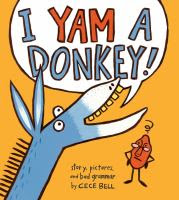 In Cece Bell's I Yam A Donkey! we find a highbrow spud of the sweet variety attempting to correct a donkey's sloppy grammar, but the donkey misconstrues everything the yam says, to the yam's increasing frustration (reminiscent of the Abbott & Costello "Who's on first?" bit).

The yam enlists some of the other vegetables to help him demonstrate proper subject-verb agreement. In the end, the dense donkey *finally* gets it, but it does not end well for the vegetables. I made sure to give this a good set-up prior to reading to help ensure the kids would get it. 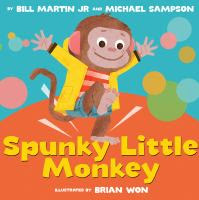 Since our last book incorporated movement, I just went straight to it, rather than do an activity first. Spunky Little Monkey by Bill Martin, Jr. (posthumously), Michael Sampson, and Brian Won is intended to encourage children to exercise. We start with a sleepy little monkey who is having hard time waking up at first, then pops out of bed. The rhythmic text (borrowing from "Five Little Monkeys" and other childhood clapping rhymes) leads us through various motions: bobbing heads, clapping hands, stomping feet, and shaking hips, all to the rhythm of the beat. I only wish it was just slightly longer and then wound down at the end for an easier transition.

I meant to do "Five Little Monkeys Jumping On A Bed" after this, but I completely forgot and went straight to our closing song, and passed out monkey stickers.

How It Went
I had another fairly big group today, with 18 kids and three adults, and I think we all had a lot of fun and really enjoyed these books. Chicken Story Time was probably the kids' favorite, as they could easily follow what was happening and relate it to our own storytime. We talked about whether we would want all those chickens in our storytime, and some of the kids said yes, and others said no, and all agreed that the teachers probably wouldn't like chickens in the classroom! And as expected, they had lots of fun with "I Know A Chicken" and the shakey eggs, and several commented on how much the liked it afterward.

After hearing that I Yam A Donkey! had not worked well for the kindergartners, I had second-thoughts about doing it with the preschoolers, but I liked it so much I had to give it a try. I made sure to give it a good set-up so they would have some context by talking about how it can be really frustrating if we are trying to tell someone something and they just don't understand and keep getting it all mixed up. Then after I read the title, I asked them "Is that how you say it? 'I yam a donkey'?" And several said "No", then i asked them how you should say it, and several did reply "I am a donkey". I'm not sure if they completely got everything about the story, but they seemed to get most of it; they definitely understood the donkey was misunderstanding everything and the yam was getting extremely frustrated, and thought that was very funny.

They always enjoy stories that break from the traditional "criss-cross applesauce, hands in your lap" and let them move around, and Spunky Little Monkey was no exception. It did seem just a little bit too short, though; I think we could've used two more spreads of action.

I liked all the books, but I think I had the most fun with I Yam A Donkey! I usually use themes just for my own convenience, to give me some direction, but not always, and the kids never notice the difference. All in all, it was a very fun, and funny, storytime!