I usually try to pick a different theme for my "regular" storytime on Friday, so I can expand my repertoire and experiment, but this week I was just too distracted to think of anything, so I stuck with the same "Frog" theme I have been doing on the Storytime Bus, though I did pick new books and spent a little more time on non-fiction. 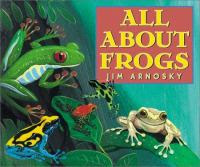 As usual, we started with our welcome song, but then I did a longer introduction than usual, expanding it into a bit of a lesson about frogs using the wonderful non-fiction book All About Frogs by Jim Arnosky. I really like this book a lot, as it covers many things about frogs, including how they differ from toads, pictures of many different North American frogs, including tree frogs, showing how they vary in size, coloring, and markings.

It also shows a few of the brightly colored poison dart frogs, which I supplemented with a number of photograghs of poison dart frogs I had copied and printed onto a single piece of paper as I find them truly amazing (there are also a couple of books just on poison dart frogs, one by Julie Murray, and another by Carmen Bredeson). This book also shows some of the things that frogs eat, as well as what eats them! Though I generally prefer photographs for non-fiction, the illustrations in this book are very realistic. I didn't read the text to them, but showed some of the pictures and talked about them.

Since the last thing we talked about was what eats frogs, which included an alligator, we then did this really fun rhyme I learned from one of our volunteers that the kids seem to like a lot:

There Once Was An Alligator

There once was an alligator, sitting on a log.
(one hand & arm is the gator, on top of the other arm for the log)

Down in the water, he saw a little frog.
(look down)

DOWN dove the alligator!
(say this suddenly & loudly, while quickly "diving" down;
it startles the kids, and they love it!)

And away swam the frog!
(make breaststroke motion with arms)

The kids are always startled when I suddenly cry "DOWN!" and dive down, then they giggle and really get into it. They like doing the motions, and I urge them to swim quickly to get away from the alligator, and often repeat 2-3 times as we keep running into more alligators. Depending on what book this follows, I may substitute "crocodile" for "alligator" and/or say "wide-mouthed frog" or "yummy frog" instead of "little frog". 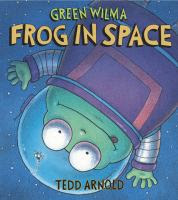 Then we sang several verses of our story song to get settled for our stories, including stomp feet, clap hands, be seated, nod head, and say "shh". Our first story was Green Wilma: Frog In Space by Tedd Arnold. In this funny story Wilma is chasing a fly and is mistaken by aliens for their child who was playing in the pond.

The aliens take Wilma into their ship and fly away. At first they think the earth's pond water had turned their dear Blooger green, but then they determine she is in fact not their son but an alien. They quickly return to earth to correct their mistake, much to Blooger's relief. 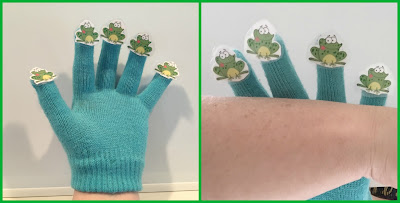 Five green and speckled frogs, sat on a speckled log.

One jumped into the pool, where it was nice and cool.

[Continue counting down to none.] 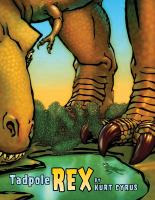 I preceded our last story, Tadpole Rex by Kurt Cyrus, with a quick lesson on the life cycle of a frog so they would understand what a tadpole was, using the same non-fiction book by Arnosky above. The title and cover of Tadpole Rex confused them, and some kept trying to correct me and tell me it was Tyranosaurus rex, so I made sure to pause an explain what was going on with the Tyranosaurus making the puddle, but the story was about the teeny little tadpole in the puddle, who was also named Rex.

The story shows Rex develop from a tadpole into a frog, and his interactions with a few dinosaurs before deciding to stay safely hidden in his puddle, with just his eyes showing. A couple remained a little confused about the mixing of frogs and dinosaurs, so I think I will either save this book for slightly older kids and give it a bit more of a lead-in with a discussion about how there were frogs living at the time of dinosaurs in the future.

After that, we had a quick "pop quiz" about frogs to summarize what we learned, and then did our closing song and passed out stickers.

How It Went
This class has been a bit unusual compared to the previous two years. In the past, the kids were more talkative, restless, and inattentive at the beginning of the year, but have matured into good listeners by the end of the year. This class started out as exceptionally good listeners in the beginning, but now are getting more talkative and harder to control at the end of the year! But they are always so glad to see me, and almost knocked me over with a mob hug when I first walked in.

They did seem to enjoy the subject and the stories, but I don't think many fully appreciated either story since they weren't listening as well as usual. The loved doing the action rhyme with the alligator, though, and most liked doing the "Five Green & Speckled Frogs" song. When we talked about what frogs eat, they always say "Ewww" at the thought of eating bugs, and I tease them, saying that's what they were having for lunch or snack. And what do you know, after I finished, the teacher pulled out some celery, pimento cheese, and raisins for them to make "Ants On Log" for snack, so they did eat "bugs" after all!
Posted by Jen at 12:35:00 PM