Review of "Creepy Pair of Underwear!"

Summary
Jasper Rabbit returns, but he is not a little bunny anymore! His mother takes him shopping for new underwear, and Jasper insists he is old enough to choose his own underwear now that he is a big rabbit. No more tidy whities for him! He chooses some cool looking underwear with a scary face on them, despite his mother's misgivings.

That night, he decides to wear his new underwear to bed, and of course he doesn't need a nightlight or the door cracked, because he is a big rabbit now. But, when the lights go out, he makes an unexpected, and unpleasant, discovery. His new underwear glows in the dark - a horrible, ghoulish, green glow!

The creepy glow keeps Jasper from sleeping, no matter how hard he tries, so finally he takes them off and stuffs them down in the very bottom of his clothes hamper. Finally, he can sleep! 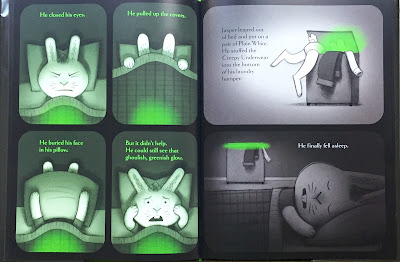 But, the next morning when he wakes up, Jasper is suprised and frightened to discover......he is WEARING the underwear! What? How?? Now things really are creepy! 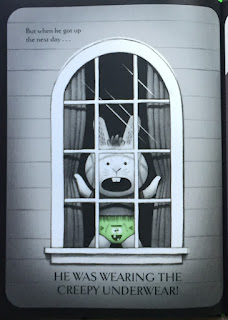 Then he tries throwing them in the garbage can outside, but when he comes home from school they're back in his drawer! He tries shipping them to China, but they come back.....with souvenirs! 😱😠😧 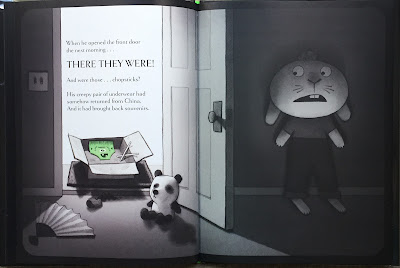 No matter what he tries, they keep coming back! Will Jasper be haunted by the creepy underwear for the rest of his life?

My Thoughts
The creative team that brough us Creepy Carrots has done it again! I predict this will be a huge hit, and I can't wait to use it! I LOVE this, and it had me laughing out loud more than once as I read it, especially when the underwear not only returned from China, but also brought souvenirs! While anything that mentions underwear is guaranteed to get laughs from the kids, this story has it all: clever humor, suspense, an age-appropriate level of creepiness, and Peter Brown's wonderful illustrations really set the mood. Another Caldecott nod, perhaps?

I particularly appreciated it because it reminded me of a somewhat similar incident that happened with my daughter when she was younger. Her grandmother had given her a black t-shirt covered with glow-in-the-dark stars that made up the face of Albert Einstein, like the one pictured here. She loved the shirt, and one night decided to wear it to bed. When she woke up in the middle of the night and saw the glow, it freaked her out for a minute, until she woke up enough to remember what it was. 😂

I think this book would appeal to all kids from the ages of 3 or 4 to maybe 8 or 9, and some adults as well. I think this could be another good selection, along with it's predecessor, for a somewhat creepy-scary story to read around Halloween without actually being about Halloween if that's something you need or prefer to avoid. Of course it would be fun any time of the year! But if you have adults who don't appreciate underwear humor, it might not go over as well with them, so know your audience.

One other thing worth mentioning is the homage to Creepy Carrots; as Jasper goes far from home to try get rid of the creepy underpants, he passes by the fenced-off carrot patch: 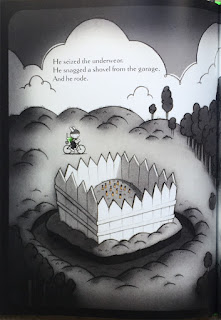 And now for your entertainment, the author performing in a Kid Lit vs YA Lit lip synch battle at the Texas Library Association conference: