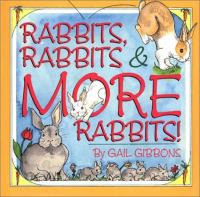 This storytime actually came from a plan I prepared for an assignment. The original plan called for Everybunny Dance! by Ellie Sandall, which is what I did for the interview, but since I had already done that book and Candace Fleming's Muncha! Muncha! Muncha! with this group recently, I used the alternate books from the plan I had prepared.

We started with our welcome song, then I introduced the topic with a non-fiction book, Rabbits, Rabbits & More Rabbits by Gail Gibbons to give them a few interesting facts about rabbits, and the difference between rabbits and hares. Then we moved on to our story song, with added bunny-themed verses. 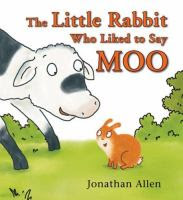 For our first story I chose The Little Rabbit Who Liked to Say Moo by Jonathan Allen. This is a cute story of a little bunny who likes to try making the sounds of other animals, and the other baby farm animals all join in. Eventually, they all decide that while it is fun making other sounds, the like their own sounds best, except for the rabbit who surprises the audience in a twist ending.

Kids love making the animal sounds, which helps with phonological awareness, and they can identify the animals. Short, simple text and very cute illustrations.

I followed that with a cute flannel board and rhyme. I used the "Shapes" tool in publisher to make a simple bunny pattern with ovals for the ears and circles for the head, body, and tail, then drew on mouth and whiskers and added googly eyes. 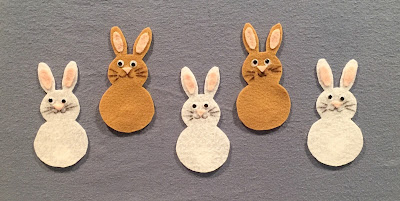 After the first time, I had the kids put the hand they used down, and use their other hand in order to be sure their non-dominant hand got some fine-motor exercise, too. 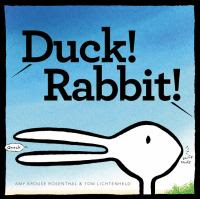 Our last story is one of my boss's favorites, Duck! Rabbit! by Amy Krause Rosenthal andTom Lichtenheld. This is an exercise in perspective and point of view as we have an image that can be seen as a duck or a rabbit.

Two unseen voices argue back and forth, each presenting different observations to support their opinion. In the end, they start to see each other's point of view. Then, look, there's an anteater! Or is it a dinosaur??

While reading the story, the kids will also argue back and forth about whether it's a duck or a rabbit. Afterward, we tried  to take a vote and graph it, but it didn't work out quite as well as I'd hoped. Three-year olds just can't really grasp the concept of voting, or making a choice and sticking to it.

I tried a show of hands, I tried getting them to line up on different sides of the room, but they would keep changing their minds. It was like an episode of Keystone Cops, LOL! We finally got them to stay on one side or the other, and I showed them how to do a simple bar graph of the results to work on pre-math skills.

After that, we sang our closing song and passed out stickers.

How It Went
Overall it went okay, though slightly downhill at the end. They really liked the first book and the rhyme. They didn't quite seem to get Duck! Rabbit!, although I did hear some arguing about whether it was a duck or a rabbit, and voting and graphing were just too much for them to grasp. While I really like the idea of adding math literacy to storytime, I think I will have to stick to sorting and grouping activities and shapes with the younger ones.