(I am writing this in June, but back-dating it to May, when I actually presented it but did not have time to write it up.)

We had caterpillars in the library during May to watch grow and transform into butterflies in honor of the 50th anniversary of Eric Carle's The Very Hungry Caterpillar. So I decided to do a caterpillar theme for both my in-house and outreach visits in May to kick it off, followed by an Eric Carle-themed storytime outreach visit (and a butterfly release) on June 3rd, the exact anniversary of TVHC.

I saved The Very Hungry Caterpillar to read in June, and picked my new favorite storytime book and a couple of other caterpillar stories to read in May. 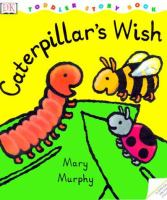 I started with my "Hello" song, and then sang a few other well-known children's songs before reading Mary Murphy's A Caterpillar's Wish. Mary Murphy's books are great for younger kids because they are short and sweet, with little text and bold, simple illustrations with heavy black outlines.

In this cute story, the caterpillar feels left behind because she can't fly away with her friends Bee and Ladybug, though they always come back to see her. Then one day she goes to sleep inside a chrysalis, and when she wakes up is overjoyed to discover she has changed into a butterfly, and now the three friends can fly together!
Three Year Olds
When I arrived, I discovered this class had increased by at least 50%, and the teacher was having a great deal of trouble handling the sudden large influx of new kid, many of whom had just started within the last couple of days.

With so many new kids, the class was completely out of their routine, and out of control! I tried, and tried to get them to settle down, and thought I had, but as soon as I started reading the story (Caterpillar's Wish), I completely lost them again. I decided rather than waste time fighting what was clearly going to be a losing battle that day, I would just cut it short and use their time with the 4-year old class, who are always really good listeners, especially since I had a great new book I couldn't wait to try with them.

Four Year Olds
As I approach the classroom, they were coming down the hall, explaining that they were just going to check on their school caterpillars in the lobby really quick. I said that worked out well, because I had brought caterpillar stories to read, including a brand new one that was really funny! 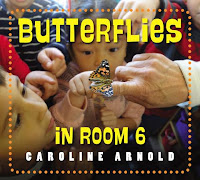 When we got to the classroom, I first pulled out two non-fiction books I brought to complement their caterpillar project. Since they had Painted Lady caterpillars, I pulled out Butterflies In Room 6 by Caroline Arnold to show them how lots of classes do the same project they were doing, and showed them a photograph of the eggs, since they had only seen the larvae, and the adult butterfly (their caterpillars were currently at the chrysalis stage). 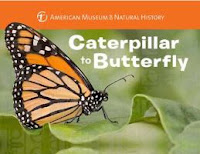 Then I pulled out Caterpillar to Butterfly by Melissa Stewart to quickly show them the stages of the Monarch butterfly (and this is a great book for that), so they could observe how it's caterpillar and chrysalis look quite different from the Painted Lady. (Personally, I think the Monarch caterpillar with it's black, yellow, and white stripes is MUCH more attractive than the black, bristly Painted Lady caterpillar!). 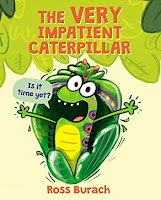 Then it was time to introduce the book I had been dying to read since I first saw it, The Very Impatient Caterpillar by Ross Burach. This book is so cute, clever, and hilarious! I have not been this amused or excited by a picture book since Cookiesaurus Rex. If you are also a fan of that book, or of Mo Willem's Pigeon books, you will love this book, too!

Rather than being very hungry, this little caterpillar is very impatient, and also has poor instincts, as he doesn't really quite know what this whole metamorphosis thing is all about or what he's supposed to do. He has a terrible time waiting, but learns the hard way that you can't rush Mother Nature. His internal dialog while in the chrysalis is very entertaining. And in the end, he learns to be patient. Or does he? I really wish I had more chances to read this book, I love it so much! The kids were not the only ones entertained by it, as the teachers found it very funny as well, and a refreshing change of pace after having already read The Very Hungry Caterpillar right before I got there. 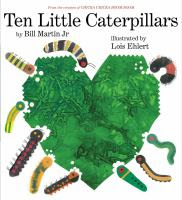 After that, I finished up with Bill Martin, Jr. and Eric Carle's Ten Tiny Caterpillars. Unfortunately, I didn't have enough time left to read the whole book, but I just flipped to the end so they could see what all the different kinds of butterflies and their caterpillars looked like, which they really enjoyed, and liked saying which ones they had seen before or which ones they liked best.

This class went so well, quite a different story from the previous class, and I was glad I made the call to just cut the previous storytime off so that I was able to give more time to the class who appreciated it most, and benefited the most.
Posted by Jen at 8:04:00 PM