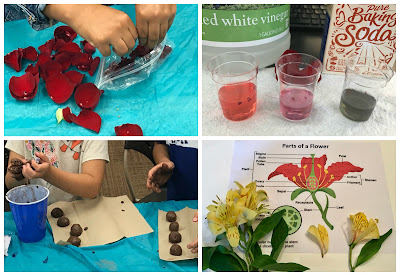 This program was inspired by the saying "April showers bring May flowers". I thought flowers would be a great theme for this time of year, as many are blooming, but it's not too late to plant new flowers, either.

For this program we dissected flowers and learned about all the different parts and what they do, extracted the pH-sensitive pigment from rose petals and tested it, then made seed bombs with native wildflowers. 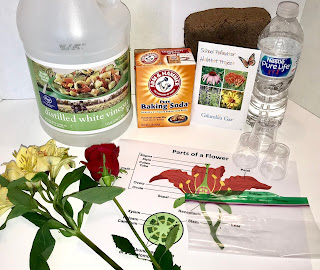 (all materials not pictured) 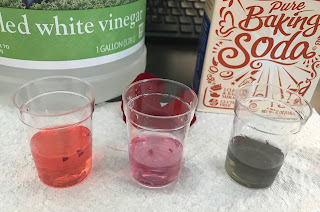 Flowers contain anthocyanins, which are water soluble pigments that produce shades of red, purple, and blue, and give many flowers their color. They are also found in red cabbage, berries, and other foods, and are responsible for some of the colors of autumn leaves. Anthocyanins are pH sensitive, which means their color can change under acidic or alkaline (basic) conditions.

In this activity, we extracted the red pigment from rose petals, and exposed it to an acidic solution and an alkaline solution and observed the color change.

I used a pre-mixed seed bomb matrix because (1) I only needed a small amount and it would likely have cost even more to buy the clay and compost separately, and resulted in excess leftover, and (2) it would save time and be less dusty and messy.

The package of matrix I got was enough for 15 participants to each make at least 6-12 seed bombs, depending on size. If we had not been pressed for time, I would have had the kids help more with mixing the matrix and adding and combining the seeds.

I was very pleasantly surprised at how good of a turnout I got (15 kids and 9 adults) since it was the day after a holiday AND the last week of school. I figured everyone would have their days off or be distracted, and expected a low turnout.

Everyone seemed very engaged, if a little bit impatient at times. I was very impressed that one little girl knew what leaves did, including the word photosynthesis. Most of them did really well following directions, though every time they had to wait just a couple of minutes for everyone to catch up, or for me to hand out the next round of materials, they acted like it was taking forever, (have fun on those long road trips, parents), LOL!

One girl got a little behind because she was so intent on tearing her rose petals into almost microscopically small pieces and had to be repeated urged to work a little faster and it was ok if the pieces were bigger. They were amazed when the water started turning purplish-pink as the pigment was extracted, and were very impressed with the color changes in response to added acidic and alkaline solutions. [Red cabbage is even more impressive as it has multiple pigments and covers the whole range of pH, but is very stinky to work with.]

I was impressed with how little mess they made making the seed bombs, and they really had fun doing it. I had to demonstrate to a few again how they were supposed to roll it into multiple small balls, rather than one large ball or mud pie. There was one girl who wanted nothing to do with it though, and said she was going to take it home and "make her mother do it". I was really impressed I made it through the whole program wearing white pants that were still white at the end!

One of my regulars cutely asked me, "Miss Jennifer, are you a scientist?" to which I replied, "I used to be, but now I'm a librarian, and that's even more fun!" [I have a BS in biology education, an MS in Microbiology, and in another lifetime worked in biomedical research.]

Honestly, this one went really well as is, though it did run over just a tad. This was mostly due to several latecomers coming in a different times, causing me to have to pause and quickly grab them materials and catch them up.

But it would also be great to just take the pigment extraction activity and expand it to a whole program by itself, by (1) providing them with additional (non-hazardous) solutions to test and determine if they are acidic or basic and (2) test the extract from a different flower of a deep blue or purple color. I had wanted to do a blue or purple flower as well, but the florist did not have any on hand, so if you want to do this, I would suggest ordering specific flowers in advance. This article has several suggestions for flowers, fruits, and vegetables that can be used; keep in mind some flowers, such as delphinium, are toxic, so be sure appropriate safety warnings and precautions are given.

One of the kids observed that the rose petals would leave pink-red marks when rubbed on the paper, so another activity that would go with this them could be using flower petals to "paint" with.