I initially had no idea what I was going to do for storytime this month, but when checking in new books I came across one that had to do with dragons, making me realize I had never done a dragon-themed storytime! So I set about requesting many picture books with dragons to consider, and found some really great ones for storytime.

I had a very small, but enthusiastic, crowd today as it was sunny and hot for the first time all summer, so I'm sure many families were at the pool, lake, or leaving for vacation with the holiday coming up. We started with our welcome song and then I went straight to our story song after introductions because I just had a feeling if I talked too much or did an extra song I would lose them. 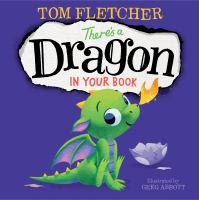 For our first story, I chose a shorter, but super cute and very interactive book, very similar to Christie Matheson's Touch the Magic Tree, There's a Dragon In Your Book by Tom Fletcher and Greg Abbott. This book opens with an egg about to hatch, and a warning not to turn the page, which of course we do.

This lets a cute baby dragon into our book, and the book encourages the audience to tickle her nose, which makes her sneeze, and that catches our book on fire! But eventually we put the fire out and all is well. But then the last page is FULL of eggs! Do we dare turn the page?

After that, we had fun pretending to be dragons with this action rhyme based on a classic: 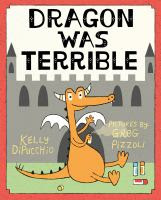 Then I moved to our next book, and my favorite of the three, Dragon Was Terrible by Kelli Dipucchio and Greg Pizzoli. I fell in love with this book when it first came out, but then somehow forgot all about it before I got a chance to use it! This book is a little longer, but is so funny and dramatic that it holds the audience's attention well, and really suits my style. I had SO much fun with it!

The dragon in this story is really terrible. I mean the spitting on cupcakes, taking candy from baby unicorns, COLORING IN LIBRARY BOOKS kind of terrible! Finally the king has enough and offers a reward to any knight who can tame him, but all fail (miserably). Then the people have had enough, and offer the reward to any person who can tame the dragon. Many try, but all fail (embarrassingly). But then one small boy comes up with a unique solution. But will it work?

I followed that with another take on an old classic, "Going On a Bear Hunt". But this time we were hunting dragons! If you aren't familiar, this is a call and response chant, with the audience repeating each line after you, while clapping in rhythm.

Going On A Dragon Hunt

Repeat the first stanza each time. We swam across the river, climbed a big mountain, and creeped into a big, dark cave. Then we felt something with scales. And sharp claws. And hot, stinky breath! Oh, no! A dragon!

Then we ran out of the cave, climbed down the mountain as fast as we could, ran to the river, swam across, ran inside the castle, pulled up the drawbridge, and closed the gate! Safe at last! 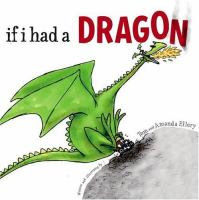 For our final book I chose another short, simple one without a lot of text, If I Had a Dragon by Tom and Amanda Ellery. In this story Morton thinks he would rather have a dragon than a little brother; a dragon would be way more fun. But, what if it flew off while he was walking it? Or took up all the room in the swimming pool? Or breathed fire on him? The more Morton thinks about it, the more he realizes that a dragon really wouldn't make the best playmate and he'd rather go home and play with his brother.

After that we sang our closing song and I put out the supplies and instructions for the optional craft.

Craft
After a disastrous attempt to download another supposedly free printable dragon mask template that had a virus and messed up my laptop, I copied one from Supercoloring.com into a Publisher document instead (laptop is still fried) and printed it on cardstock.

I provided crayons, scissors, tape, large craft sticks, and red & orange streamers. First they colored their dragons, then cut them out with the help of their grown ups, and some of the grown-ups needed help with the eye-holes. After that, they attached the crepe paper streamers to the back and cut them into jagged fringe to look like flames, and added the craft stick for a handle. Simple, but turned out surprisingly cute!

How It Went
I had a really small turnout, and two of the kids were very young and couldn't sit still and were roaming throughout the storytime, but that was fine. On little girl was extremely engaged, so that made up for it. They really liked the first two books and the first action rhyme, but were getting a little restless during the "Dragon Hunt" and last book, but some were still listening.