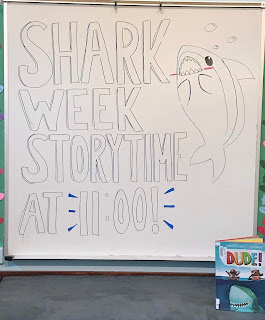 I have so much fun with the "Shark Week" theme every year! I do the Saturday storytime, which doesn't have a regular audience like the weekday storytimes do, and often people just happen to be at the library when it's time for storytime. Since many don't come specifically for storytime and often leave right before, I asked my teen volunteer if she could write a notice on the dry erase board in the storytime area, along with a picture of a cute shark to hopefully get people to stick around for storytime, and she did a great job, as you can see above. 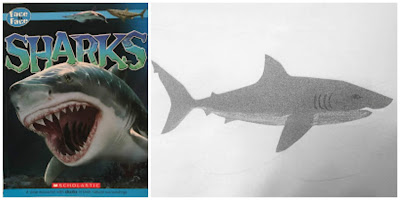 We started with our welcome song, and then I introduced the subject, and we talked a little about sharks. I used the non-fiction book Face to Face: Sharks from Scholastic to show them how the size and shape of sharks' teeth varied, depending on the size of the shark and what its prey is. I also passed around a prop I made to let them get an idea of what a shark's skin feels like. Most think it would be slimy or slippery, because it's a fish, but it's actually very rough and feels a lot like sandpaper due to its dermal denticles. I cut out a shark shape from gray sandpaper and added shading and details with a colored pencil and sharpie, and mounted it on cardstock so they could all feel it. 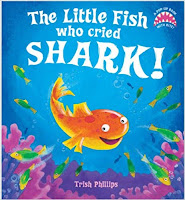 Then we led into the first book with our story song. For our first book I decided on one of my favorites, The Little Fish Who Cried Shark! by Trish Phillips, a pop-book that is a retelling of The Boy Who Cried 'Wolf'.

Naughty little Sprat loves playing tricks on everyone, especially scaring them by yelling "Shark!", but in the end he learns that sharks are NOT a laughing matter. Told with rhyming text that has a great rhythm for reading aloud and wonderful pop-ups, this is a story that is sure to engage. Unfortunately this book is out of print, but the used copy I bought was in pretty good condition.

After that we sang a song that features some of the same ocean creatures that were in our book.

With younger kids I simplify it by just saying "swimming" each time, rather than using a different word for each animal as in the original. 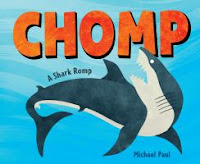 For our second book I chose a new non-fiction picture book that shows many different sharks, categorized by contrasting characteristics, Chomp: A Shark Romp by Michael-Paul Terranova. The artwork is not so realistic, which makes it a better choice for younger or more sensitive audiences.

[Another one I like is How To Spy On a Shark by Lori Haskins Houran, which explains how scientists study sharks in a very accessible way.]

And of course we couldn't do a Shark Week storytime without singing "Baby Shark". There is a slightly slower version I've always used in the past that I like better, but the PinkFong version is so well known, I figured it best to go with that.


I started using a version of this song several years ago, before it went viral, and my son said he blames me for how popular is is. I'm flattered he thinks I'm that influential 😂.

For our final story, I chose a classic, Nick Sharratt's Shark In The Park. This one is great when you need something short without a lot of text, plus it is very interactive. Timothy Pope takes his new telescope to the park, where he keeps thinking he sees a shark, though each time it turns out to be something else. Eventually it's time to go, and he leaves, declaring that there is no shark in the park. But, did he miss something?

If you like this one, there is also a little-known sequel, Shark In The Dark.

We ended with a closing song, and I set out supplies for the optional craft.

Knowing I'd likely have a small crowd and people are often in a hurry to leave in the summer, I kept the craft very simple. I found this "big mouth shark" printable template at "Easy, Peasy, and Fun" and printed it out on white cardstock, then provided crayons and an example.

First you color your shark, and draw any other scenery and details you would like to add. Then fold back along the line of the upper jaw. Next, fold down until the upper jawline meet the lower jaw. Fold/unfold to reveal the sharks big mouth and potential meal!

I had a decent crowd and we had a lot of fun, though I was a bit distracted and disturbed when about half the audience got up an left after the first book. I've never had this theme not be a huge hit, so I was very confused at first, and wondering if it was me. But after thinking about it and talking with my supervisor, I think it is just a weekend storytime in the summer thing. People have other activities planned, and most did not plan on attending storytime or know that we had one, and just happened to be there. I think they just decided to stay for part of it, then have to leave because of other plans. Also they may not have anticipated that storytime was more than just reading one story. Do any other Saturday librarians see this same phenomenon??

I also got to wear my shark print dress and shark tooth earrings! Just call me Ms. Frizzle :) 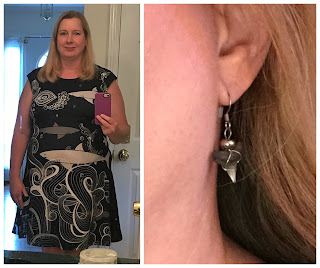