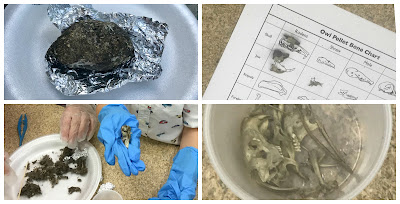 My final program for the summer was of the "gross-but-cool" variety. I was not the one who initially suggested the idea, but it was right up my alley and I developed the program plan for the system.

Budget: Approximately $3/participant, minimum cost $93 for up to 30 participants, with some supplies leftover.

Description: After a discussion of owls’ habitat, behavior, diet, and what owl pellets are, participants will use scientific and mathematical skills as they dissect owl pellets, examine, sort, and identify their contents, record and analyze the results, and draw conclusions based on their results. This activity is best suited to a classroom style presentation. 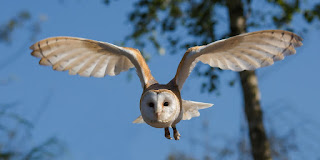 I started with a very brief PowerPoint to show different types of owls, present some interesting owl facts, and go over their digestive system and how the pellets are formed. We talked about what we might expect to find in the pellets (bones, teeth, and hair), and I showed them pictures of the the bones I had found in my test run, as well as skeleton diagrams of the different possible prey animals.

Participants used forceps, probes (bamboo skewers), and gloved hands to carefully dissect the owl pellets and remove any solid materials found. Each participant got their own pellet. This could be done in pairs, but then you have the dilemma of how to divy up the bones if multiples are not found. (Pellets are dry-heat sterilized, which kills most pathogens but gloves are still recommended as a precaution.) The bones have to be carefully dissected out of the mass, and cleaned of all the hair. There is a lot of hair packed into that little pellet!

As the bones are dissected, they were placed on the piece of black paper and sorted. Using the skeletal diagrams, the bones were identified and recorded with tally marks on the bone chart according to type of bone and the animal it came from.

My intention was to discuss what we found and combine the groups tallies into a graph, but that part kinda fell apart as I realized hardly anyone was actually keeping track of what they found as I had intended. However, they were all really engaged and having a great time, and I didn't see any need to force the issue. This part would probably work better with a slightly older group, and more detailed instruction as I don't think they really understood.

Activity #4 - Skeletal Assembly (Optional)
Using the skeletal diagram, participants could determine if they had parts to make up a complete skeleton, and possibly trade with others who had extras of some parts. Then the bones could be glued in place on the diagram. Since this would require a significant amount of drying time and be difficult to transport home, I told them they could do this part at home if desired (condiment cups were supplied to take bones home). 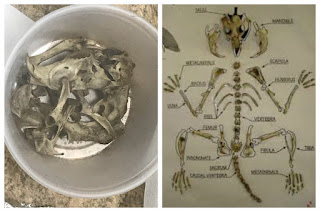 One of my co-workers put up a display of owl books the day before the program, mostly picture books but also some non-fiction and chapter book series, and I put up an owl-themed scavenger hunt with pictures of different kinds of owls.

The display helps to promote the program, and the program helps promote checking out the books, and the scavenger hunt gives kids something to do before and after the program. We always have some type of scavenger hunt going on, just pictures "hidden" around the department, often tied to a program we have that week or something seasonal. Patrons LOVE it!

This program was messy and gross, but a huge success! I ended up with 27 kids with 18 adults. It was amazing how much people got into it, even the adults. Quite a few of the kids were accompanied by their grandmothers, and at first some of them were quite reluctant, but by the end several were gloved-up and digging into the pellets right along with the kids.

I got a number of thank-you's and positive comments from adults and kids alike, with some of the adults commenting on how interesting it was and how they learned something new. One little girl gave me a big hug, and her younger brother exclaimed with a huge grin that he wanted to "come to the library and do this every day!"

I was a little disappointed they didn't really do the identification and recording so we could compile and discuss the results, as I do like to incorporate math when possible, but hey, it was summer and a library program, not school. What was most important was that everyone was engaged and learning and having a good time. I realized I did not give enough instruction and should have gone over in more detail how they were supposed to use the information in their packet and how to identify and record their results.

FYI - The pellets are dry and do not have any odor that I noticed. They are dry-heat sterilized; never used untreated wild pellets. We found the bones of mice and voles in all of our pellets, and almost everyone found at least one skull, and several found more than one. I found two fairly intact skulls in mine, plus the parts of two more.