I thought it would be fun to end the summer with a kitchen chemistry program featuring edible experiments, namely making ice cream in a bag. This is a really cool activity that I have written up on the blog before ("Ice Cream In A Bag STEAM Program") as an idea, but this would be the first time that I had actually done it with a group of kids.

I decided to pair it with making butter, though it is a completely different scientific process at work, since both are dairy and both require shaking, which I thought we could have a little fun with by having a playlist featuring songs with "shake" in the lyrics.

1. We first discussed how butter is made from cream, and the cream is the part of the milk that contains most of the milk fats. The fats are suspended in tiny particles in the solution, but when cream is churned the particles are knocked into each other and stick together, gradually forming larger and larger globs until you end up with one big ball of butter.

2. I gave each child one of the small containers, then poured heavy cream into each one, just about half-full. I instructed them to put the lids on, and asked the adults to please double-check that they were completely sealed.

3. I explained that they would have to shake that container very hard for about 20 minutes, and that first they would hear/feel it sloshing around, then it would form a thick foam of whipped cream that would not feel sloshy, but to keep going after that and eventually the butter would separate from the liquid, leaving a big ball of butter rolling around in the liquid.

4. Then we began shaking! To make it a little more fun, I put together this playlist to go along with the shaking: 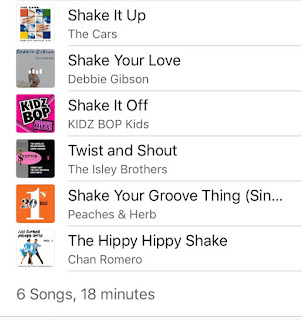 5. I went around encouraging them to shake harder, and let their grown-ups help out a little if their arms got tired, showing them how hard you have to shake, and checking theirs to let them know if it was done, or how close they were. Many wanted to stop at the whipped cream stage, and had to be urged to keep going (hint: at that stage vigorous stirring can also push it to the separation phase).

6. After a lot of shaking the butterfat had finally congealed into a fairly solid ball for everyone, and I showed them how to decant the liquid off carefully and gave them each a pinch of salt to stir in for flavor.

7. I then passed out crackers for everyone to spread a little of their butter on to taste, and then they could put the lids on and take the rest home.

(For step-by-step photos and detailed instructions and explanations, please see my previous post on this experiment.)

1. We began with a brief discussion about how salt mixed with ice depresses the freezing point and causes the temperature to drop below freezing, allowing us to make ice cream. I had all of the ingredients put out on two tables, with signs instructing how much of each. They formed two lines, adding 1/2 Cup of half & half or almond milk, 1 Tablespoon sugar, and  1/4 teaspoon vanilla to a small ziplock bag, and sealing, then filling a large ziplock bag half-full with ice and adding 1/3 C salt to it.

2. After making sure the small bag was sealed, they placed it inside the large bag and sealed that as well.

3. Then it was time for more shaking! Luckily, this only requires 5-10 minutes of shaking, and it does not have to be as vigorous as with the butter making. The bag does get very cold, so having gloves to wear or towels to wrap the bag in is handy.

4. After 5-10 minutes, carefully remove the smaller bag and check to see if it feels firm, open and enjoy! I had intended to measure beginning and ending temperatures, but I was too busy managing the crowd. However, when I tested at home, the ice was at 0℃ (32℉) at the beginning, then after salt was added the temperature steadily dropped to about -7℃ (20℉). 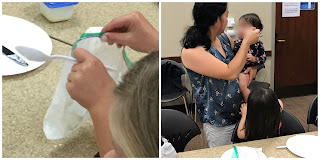 Note: This also works with juice to make a slushy/sorbet, which I had intended to do as well, but we ran out of time. I provided almond milk as a non-dairy alternative for those who have dairy allergies or lactose intolerance. Rice milk is the least allergenic, but does not work well for this application, and I couldn't find the coconut milk, which is most recommended.

This did not go how I expected at all! For these monthly after school STEM programs, I typically get about 12. So for this one I expected 12-15, prepared for up to 24, and got 32! And that's not counting all the accompanying adults and younger siblings. (This ended up be scheduled on the last day before school started, which I think is why we got such a huge crowd.)

So, from the get-go I was scrambling to get more chairs set up and stretch ingredients and supplies. Fortunately, I had asked one of our teen volunteers if she wanted to come in that afternoon instead of the morning and help with the program instead of the usual cleaning, straightening, and other boring stuff we have for them to do, and one of our circ staff stepped in to help as well.

I had to ask families to share one container of cream for the butter-making, which I didn't feel bad about since it would be plenty of butter, and they would likely be glad to let someone else shake for a while! Then I had to instruct them to just get 1/3 Cup of half & half for making ice cream, and still ran out because I had not bought any extra of that. Luckily, my coworker remembered some whole milk left from another program that was in the fridge and still good. We also ran out of ice and had to raid the icemaker in the staff kitchen.

But, though I didn't have time to get into the science of the activities as much as I would have liked because of the huge crowd causing everything to take longer, both activities worked really well and everyone seemed to really like it. I heard many families saying "We'll have to do this at home!" as they were leaving.

We did have one big mess I felt really badly about because the carpet in the meeting room had JUST been cleaned last week, and one boy managed to dump his whole container of cream in the floor (I suspect a result of horsing around) because he squeezed it and popped the lid right off. He was part of a group of 3-4 older boys that kept horsing around to the point I told them I was going to have to ask them to leave if they couldn't act appropriately. I have never had to do that before.

Another small issue was latecomers. And I don't mean just 5-10 minutes late because somebody had to use the bathroom just as you were leaving or got caught in traffic, but 20, 30, even 45 minutes into the program! Some people seem to assume these programs are just "drop in whenever you feel like it" and seem surprised when they've missed out on part of the activities and we've run out of supplies. I don't really understand this or know what to do to make it clear that it's not a drop-in, self-paced, DIY type of program. One family came right at the end of the butter-making, and got really upset because I had no more supplies and they missed it, and aggravated because they had to wait until we began the next activity to join in. But I don't know what else I could've done at that point?

First, as much as I hate waste, I probably should have had even more extra supplies, and I could have used whole milk instead of half & half to help cut the expense a little. Some might suggest registration, but requiring registration is STRONGLY discouraged by the powers that be, though it would've been very helpful in this case.

Second, I think the butter making needs to be its own program, as it takes so much longer. I could've easily spent the whole program on that, and talked even more about the science of it, let them make a larger amount and try different flavor additions, like herbs, honey, cinnamon, etc., and had a few more "vehicles" for tasting it on. The ice cream making would work well with my previous "Icy Experiments" program.

For the ice cream, we used ziplock sandwich bags and gallon freezer bags with a slider ziplock closure, but had problems with both leaking of the outer bag, and leaking of the inner bag, causing some participants to end up with "ocean-flavored" ice cream. I used to use pint freezer bags, which are more heavy-duty, but they don't have those anymore. So I would definitely recommend double-bagging the cream mixture. Some of the outer bag "leakage" was just condensation, but some were definitely leaking at the corners, so though it's additional expense and plastic trash, double-bagging the outer bag might be a good idea as well, though wrapping in a towel for shaking helps with that problem, too.

All in all, it was still a successful program, but if I had known I would get such a large crowd I would have planned differently. I really do prefer smaller groups for STEM programs in order to really focus more on the science and attempt more advanced activities.