Experiments exploring the interactions of ice and salt are definitely seasonally appropriate in January (but could also be a nice escape from the heat in the summer). This was a fairly simple program that wasn't glamorous or flashy, but the kids really had fun with it. Best of all, it did not require a lot of special supplies.

I settled on three activities: growing frost, "ice fishing" (picking up ice cubes with a string), and excavating something trapped in a block of ice. Another activity that kids would love and would go well with the theme is making ice cream (or sorbet) in a bag, but I decided to save that for a later "kitchen chemistry" program because a coworker had done it recently in another program.

Time: 1 hour (an additional 15 minutes would have been good)

Number: 13 (but could easily work with larger groups)

This is an old trick that I decided to give a little bit of a fun twist by making fish-shaped ice cubes, but if you don't have the budget for molds or the time, you can certainly use regular ice cubes.

You could do this with multiple individual small ice blocks as I did, or fewer larger ones and have kids work together, and use whatever small items you want to freeze. I happened to have a bunch of cheap small plastic dinosaurs, so that's what I used (though mammoths or cavemen would have been more appropriate!). I've seen people use beads, cool erasers, Lego minifigures, and dolls (such as Anna for a Frozen theme).

The Science Behind It

Salt has a seemingly paradoxical effect of both melting and freezing when mixed with ice that is a little hard to wrap your head around, and difficult to explain.

When you add salt, it begins to melt the ice. This creates a small amount of a salty solution, which has a lower freezing point than plain water, thus can reach colder temperatures. The melting process actually pulls energy, in the form of heat, from the mixture, thus allowing the temperature of the salt water to drop below the normal freezing point of water, producing temperatures cold enough to freeze other solutions with a higher freezing point that it contacts.

This is how it freezes ice cream, how it froze the water vapor in the air causing frost to form on the can of ice and salt, and how it caused the wet string to freeze to the ice cubes, allowing them to be picked up. But, eventually it melts even more of the ice and the temperatures equilibrate, and given enough time and salt, the overall effect is melting, which is why we use it to melt ice on sidewalks and streets.

Even though this was not the most flashy or glamorous of programs (as compared to my Spooky Science or Paleontology programs), the kids really enjoyed it! The frost experiment was a little dull, but they were really impressed with the "Ice Fishing" trick, as were some of the adults! Not only was every child successful on their first or second try, some of them took it one step farther and started catching multiple "fish" on a single string at the same time! I told them this was a very simple trick that they could easily do at home to impress the rest of their family or friends!

Most of them really got into the ice excavation, though some struggled with it and some got a little frustrated that it wasn't quick and easy. This is an activity that requires time and patience, and does not provide instant gratification, which is a good lesson to learn. They tended to forget about using the salt to assist them in their efforts, and I had to keep reminding them to add it, and to spoon it back on top if it washed away. The rock salt was clearly better than the table salt for melting. I did end up have to use hot water to assist the last few kids in freeing their dinos at the end.

Overall, it was a great, easy, and inexpensive program and I was very pleased with how it went and how much the kids and adults all seemed to enjoy it. I highly recommend the picking up ice cubes with a string trick! I did go to the extra step and personal expense of purchasing fish molds to make fish-shaped cubes tinted orange to make it even more fun. It's not necessary, but it added a nice touch of whimsy. The frost forming was a little dull and could easily be skipped to allow more time for the other two, but it didn't take much time, either.

I tried to explain the science, but I'm not sure if they got it, though at this young age I think impressing them with cool, fun experiments to get them interested in science and encourage scientific exploration and curiosity is the most important thing, and maybe when then are exposed to these concepts again later it will "click" much faster. 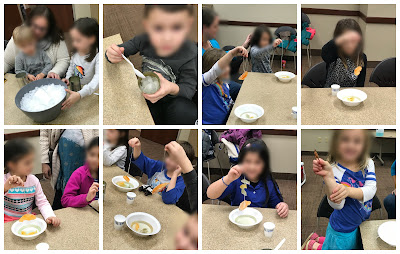 What I'd Do Differently:

If I were to do it again, I think I'd start with the ice excavation, and just give them the ice block and let them first think about and discuss how they'd go about getting the dinosaur out, leading them to the idea of using salt. Then I'd give them the rock salt to put on top and just let sit while proceeding with the frost experiment. After that, I'd have them check on the melting, and see what they thought they should do next: chip at it with tools? more salt? different salt? I'd then suggest spooning the accumulating salt water over, chipping away a little bit with the tools, then spooning the rock salt back on top and sprinkling a little table salt to get in all the little nooks and crannies and waiting while we did the next activity.

They really need to let the salt do most of the work, and just use the tools to chip away at weakened fragments occasionally, then put the salt back on. The rock salt works best, but table salt can be sprinkled over and work into the small spaces in between. The tools do not work on solid portions of ice, only salt-corroded areas! And still have hot water if needed to speed the process.

My next STEAM program with have to do with icky germs, and I think will be a lot of fun!
Posted by Jen at 7:00:00 AM