Well, I will start off by saying that I was overly ambitious in planning this Dinovember program, and it was more labor intensive than I expected it to be. We didn't get to do everything I planned, and it took both more prep and clean-up time than expected, BUT I had a great turnout and everyone seemed to really enjoy it. [As always, click on any image to see it full size.]

Time: 1 hour (clean up time was an additional hour)

Number: 18 participants (for more than 12 I highly recommend an additional staff member)

Budget: Approximately $45 (but had leftover consumables, as well as reusable items)

Since it is difficult to remove fossilized footprints without ruining them, and preferable to leave them where they are for others to see, paleontologists often make plaster casts of them instead. 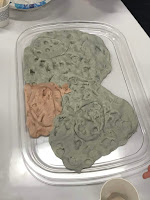 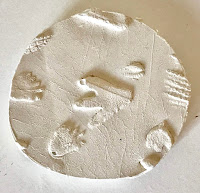 *Plaster is normally mixed 2 parts plaster to 1 part water and takes about an hour to set. Adding salt to the mixtures speeds this up (but adding too much also weakens the plaster). In addition, stirring the mixture with sticks that are coated with cured plaster provides crystals to seed the reaction, further speeding it up so that it will set in 10-15 minutes. 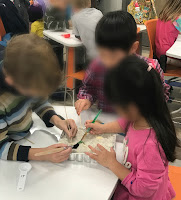 There are many different ways to do this, but this worked really well (though messy). If possible, do outdoors, or at least on a non-carpeted floor. I wanted it to be more than simply sifting through sand, but also material that was easy enough to dig through in the amount of time we had, and somewhat simulate different layers of earth/rock. 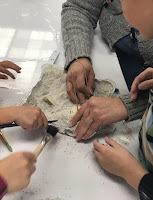 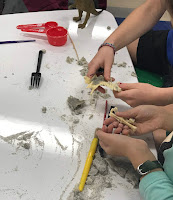 Dig!
I also had my large dinosaur skeletons (about the size of a

German shepherd) for the kids to look at and take pictures with. 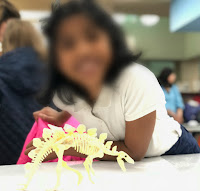 Overall, it went well, but I did not get a chance to do everything I wanted. In addition to these two activities, I had intended on showing them a number of real fossils; no dinos, unfortunately, but a lot of others that can be found in our area, even microscopic fossils in diatomaceous earth, but there was just no time.

The first activity took twice as long as I had expected, because (1) people weren't listening or following directions, and (2) there were several latecomers, so I had to stop and repeat or start over several times. I was torn about whether to make the footprints ahead of time and let the dough dry hard to save time and be more like rock, and I now wish that's what I had done. All but one of the plaster casts set, but a few broke because of rough handling or not pouring all the plaster

in and making it thicker, and thus stronger.

The excavation worked really, really well and the kids clearly enjoyed that the most, and some of the parents really got into it, too. I would highly recommend the skeleton set I bought, even if they did send us two stegosauruses and no T. rex. It did make a huge mess, and I spent a full hour cleaning up. I would have had a layer of slightly damp, packed "dirt" and only a thin layer of loose dirt on top, but I didn't have time as the dinosaur skeletons didn't arrive until the day of the program!

I wish we'd had time to do some of the fossils, especially because that was the main reason the oldest child came, but I'll have to figure out some other program to do where that can be the focus. I really felt bad when he asked about them and I had to say we just didn't have time and I hadn't even had a chance to unpack them. I would've been happy to show him some afterward if my shift wasn't already over and I still had all the clean-up to do.

In hindsight, the plaster casting and excavation activities were too much to do together. If I had it to do over again, I'd just do one of them along with looking at real fossils, and spend a little more time talking about the science of paleontology, how fossils develop, and how they are found, and the individual fossils.

I definitely learned my lesson about being overly ambitious and overplanning! But next month's program will have no prep and virtually no clean-up, so it balances out. Plus I got to channel Ms. Frizzle and wear this super cute dinosaur dress 😉