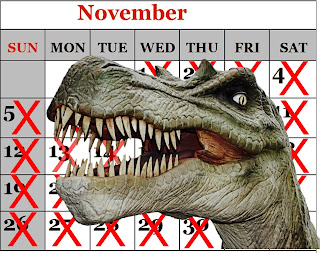 All good things must come to an end, and Dinovember has now come to a close.

First, I have to say this was so much fun and I am so glad I finally had the chance to do it, and I hope I get to do it again, bigger and better! But I also learned some lessons along the way, and there are some things I would do differently.

My interpretation of Dinovember had 5 parts: 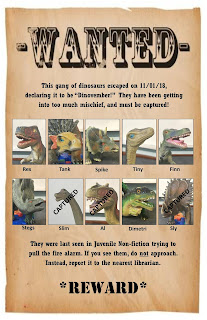 Most of it went well, and I would do some form of them all again, but there were a couple of things that I would do differently or tweak just a little. Storytime was fine, people liked all the passive programming, and kids LOVED hunting for the escaped dinosaurs! They would check the wanted poster when they came in to see how many were still on the loose, study the photos for clues, and plot strategy. Others found them by pure luck. One girl said she'd been looking for almost an hour, gave up and went to get a book to check out, and when she pulled the book she wanted off the shelf, there was Stegs hiding behind it!

I definitely over-planned for the STEAM program, and you can read more about the details of where I went wrong and what I would do differently in my previous post specifically about that program. The "What the Dinosaurs Did Last Night" is the part that was the most fun, but also where I learned some valuable lessons and would make the most changes.

(1) Start planning and staging pictures early! Don't wait until November, especially if you will not be able to post them to social media yourself, or if you want to hide the dinos for kids to recover, and especially if you are only part-time and only occasionally work before opening.

(2) Not everyone will be as into it as you. I thought other staff members would get into it and contribute ideas or stage photos, too, and though I did get a couple of suggestions, it ended up being mostly me, and I started running out of really good ideas. So another reason to start planning early!


(3) It takes longer to stage the photos than you think it will!

(4) Be sure to carefully check the photos as you are taking them; the camera does not always see things the way you do. There were some pictures that did not turn out like I expected, but I had already cleaned everything up by the time I realized. If I had checked the pictures first, I could have easily made some quick adjustments and gotten better pictures.

(5) Keep it simple, and very obvious. I got too sophisticated in one of mine (glitter bombs). It was a very clever idea, but too dependent on people looking very closely and picking up on clues and getting the references to fully appreciate the joke, and few did.

(6) People like to see the dinos being REALLY naughty! The fire alarm photo was by far the most popular photo of them all.

(7) With the exception of the fire alarm photo, engagement gradually decreased over the course of the month. I wonder if I should have started off with the more cutsey pictures and built up to the more outrageous to maintain interest? Post more frequently? Less frequently? Over a shorter period of time?

(8) Meet with your social media person in advance and make sure you're both on the same page and work out the scheduling and captioning together then. While our social media person was very much on board, there were some missteps with wording, scheduling, and missing posts that I think could have been reduced with more advanced planning and communication.

Here is a collage of all the photos I staged (click to enlarge, or visit my Facebook page to see them individually). The dinosaurs escaped their storage bin, had their own storytime, wrote on dry erase tables & played board games, tried to pull the fire alarm, sent glitter bombs, got into the paint, had Thanksgiving dinner, terrorized the trains, played with visiting Flat Stanley, researched world domination, shared their favorite picture book for National Picture Book month, and finally the leader Rex turned himself in after all the others had been captured, and they all settled back in their storage bin for a nice long rest. 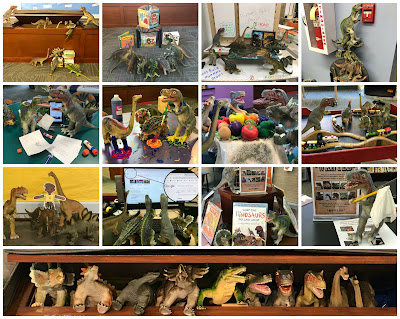 As of this posting the "What the Dinosaurs Did Last Night" photos have garnered over 1,100 likes, reactions, comments, and shares across the library's social media (Facebook, Instagram, & Twitter). If you add other related posts, the grand total for all Dinovember social media is over 1,200 direct engagements! In addition, attendance at the two programs was 20% and 32% higher than usual, respectively. [For context, our system is in a larger metropolitan area with a diverse population of around 320,000.]

I do have visions of doing it again and trying to get others on board and going system-wide the next time, with the dinosaurs sneaking aboard the courier's truck and traveling around causing mischief at all 6 locations, and each branch having a different dinosaur program. Some other activities/programs I'd like to do are:

Have you done Dinovember? If so, what activities/programs did you do? Have any tips to share or experiences to share??
Posted by Jen at 10:30:00 AM

Email ThisBlogThis!Share to TwitterShare to FacebookShare to Pinterest
Labels: Dinovember, Other Programs