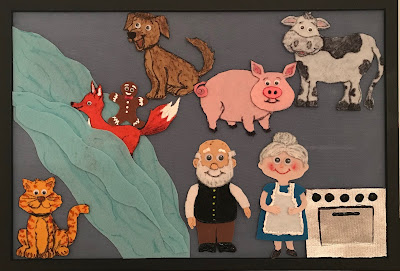 I have tried to find a version of the folktale The Gingerbread Man to use in storytime a few times, for a "Folktales & Nursery Rhymes" theme, a "Cookie" theme, and at holiday time, but have never found one I really liked. There are many variations and a number of cute versions, but they are always way too long and text-heavy for my kiddos. The closest I've found is Harriet Ziefert's, but the book is so small and illustrations a little dull.

So I decided to make it into a flannel story in order to tell an abbreviated version, and tell it the way I wanted to. This is actually my first true story set! All the ones I have made before were to go along with various songs and rhymes.

I am still fumbling around with different techniques, learning by trial and error, so mine aren't necessarily put together in the best or prettiest way (don't look at the backs :D), but in the end I was pretty happy with them, other than now wishing I'd made the animals slightly smaller.

I found clip art online to use as patterns and for the first time I had stiffened felt to work with, which made a world of difference, especially since my scissors at home were not the greatest. I have no time to make flannel sets at work now, so I've bought my own felt supply and make them at home. The bonus is that they now belong solely to me and I won't have to leave them behind if I change jobs (like I did my "Five Nervous Turkeys" that took FOREVER to make 😭).

I cut out the pieces and glued them together with Aileen's Tacky Glue, added details with colored sharpies, and some puffy paint. Note: Puffy paint takes a long time to dry! I've never used it before and I was not expecting that. I used googly-eyes, because the kids like them, I like them, and they just make everything more fun! The old man and woman took a fair amount of time, but the rest went fairly quickly. I made a couple of different sizes of the gingerbread man, too.

(I must confess I ate a fair number of Pepperidge Farm Gingermen while I was working on these 😉). 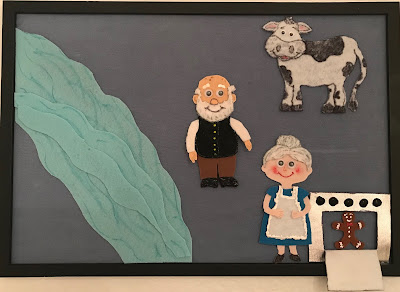 Run, run, as fast as you can! You can't catch him; he's the Gingerbread Man!