This is my second STEAM program with my new job (the first was a repeat of my "Mirror, Mirror" program), and since it was going to be close to Halloween I immediately thought of playing with dry ice to make creepy fog, a bubbling cauldron, and ghostly bubbles for a "Spooky Science" theme.

Since the audience has tended to be on the younger end of the intended age range of 5-10, I decided it would be best to do the dry ice experiments as demonstrations rather than hands on, and a friend (thanks, Rebecca!) made the suggestion of making a clear slime "ectoplasm" a la Ghostbusters for a hands-on activity. I played around with it and then discovered I could buy glow powder on Amazon, and decided to go one step better and make Glow-in-the-Dark slime!

Budget: $70 total (but that was enough for at least 36 participants)
Ages: 5-10+
Time: 1 hour
Number: I had 12 kids, would not recommend for more than 20 unless you have more than one staff person to run it.


1. Bubbling Cauldron & Creepy Fog - To set the mood, I started off by having a 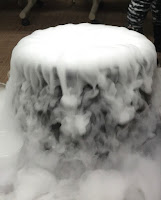 bubbling cauldron going as they came in the room by putting about 2 cups of dry ice into a large plastic cauldron and adding hot water. This will initially produce a mass of rolling fog, then it will settle down into a steady "simmer". [Click on any photo to see full-size image.]

After everyone was settled, we talked about what was going on, what dry ice is (frozen carbon dioxide, -110 F or -79 C), and sublimation. Then I poured in more hot water to set off another mass of rolling fog, and let them come up in groups of 3 to put their hand into the fog in the cauldron. I also got some of the water out and let them feel how it was now cold, even though it was hot when I put in.

2. Cold "Boiling" Water - I filled a tall-ish, clear container with cold water and added just a few pellets of dry ice. The audience could see the bubbles of CO2 gas form on the pellets (which sink rather than float like wet ice) and float to the top. Though the water appears to be boiling, it really isn't, and kids could touch the water to confirm it is cold. 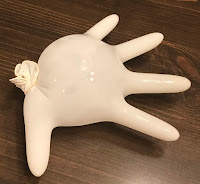 3. Self-Inflating Glove - Next, I put 2-3 pellets of dry ice into a latex glove (because I had no balloons), and we watched it inflate (takes about 20 minutes at room temperature, but you can speed this up by putting it in hot water).

4. Screaming Ice - Then I made the dry ice "scream" by picking it up with metal tongs, then by putting some in a metal bowl. The noise is caused by the evaporation of the dry ice when it contacts the warmer metal and producing a high-pitched vibration that sounds like a screech or squeal. It only lasts a couple of seconds and isn't very loud so I made sure everyone was quiet and listening first.

5. Giant Ghost Bubble - I first made a soapy solution (I didn't measure this, but I'd guess about 1/4 C Dawn dishwashing soap to 1 C water), then got a large glass bowl and put about 2 cups of dry ice pellets in, and added hot water. Then I dipped a fabric strip in the soap solution and lightly ran my fingers down it to remove the excess (saturated but not dripping). I held the strip taught and ran it across the top edge of the bowl to create a soap film, then we watched the giant bubble grow! It eventually burst, releasing a ghostly fog!

You can repeat as long as soap does not end up dripping or running down into the bowl. If it does, smaller bubble will form and grow within the bowl that will prevent you from being able to make a large bubble. Let it bubble for a while, then you can pour off the water, rinse the dry ice lump a couple of times, then add more hot water and try again.


1. Set Up - I made the Borax solution up ahead of time, as it is inhalation/ingestion of the powder that is the safety risk. I added 1/2 teaspoon Borax powder per cup of warm water, which is about a 0.88% solution, and stirred until dissolved (allow for 1/4 Cup solution per participant). I then dispensed the solution into small water bottles (1 for every 3 participants) and labeled clearly with a Sharpie. (I did not have empty bottles, so I used the water from the bottles to make the solution so as not to waste it).

I set out a bowl, a cup, and a craft stick (for stirring) at each place. Then I set out 1 bottle of water, 1 bottle of labeled Borax solution, and 1 set of measuring utensils for every 3 participants. Since I had 1 big jug of glue, I measured and dispensed it into their bowls; if you use smaller bottles you can let the kids do it themselves, reminding them to use the craft stick to scrape it all out.

2. I instructed participants that it was very important that they listen and follow directions and not do anything until I told them to if they wanted theirs to turn out right. First, they were to measure out 2 tablespoons of water into the cup, then add it to the glue in their bowl.

3. Then they added 1 drop of desired coloring, and glitter of their choice. I cautioned them that it was very important not to add too much coloring or glitter, and they would see why later [the less color & glitter the better for a brighter glow].

4. I then added 1/4 teaspoon of the "secret ingredient" (glow powder) to each one, and gave them a few minutes to get all their additions mixed well, using the craft stick. [I never told them we were making glow-in-the-dark slime, so they would be surprised and amazed.] 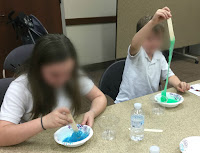 6. Then we spent a few minutes mixing, and I went around checking their slime and letting them know if they needed to add a little more Borax. Some needed it all, and some didn't, probably due to variations in measurements, and stirring. Some had to work theirs a little bit to get it to all come together into a ball.

7. Once everyone's slime was to a satisfactory consistency and they were playing with it, I told them now we're going to see what the secret ingredient was for, and turned the lights out. They were suitably impressed, as you can hear from the "oohs" and "aahs" in the video below (be sure volume is turned up). Unfortunately, the glowing slime didn't show up very well in the video after it was uploaded, but you can see it better in the pictures further down.

8. I explained what the glow powder was (strontium aluminate) and that it works by storing energy from the UV rays in the light, then slowly releasing it, producing the glow, a type of solar energy. When it stops glowing, it just has to be recharged by putting under a bright light or in sunlight (I had pre-charged the powder by leaving it in the sunlight for an hour, and shining a UV flashlight on it for a few minutes before using it.). It can be used and recharged indefinitely, but the slime itself will start to break down after maybe 3-4 weeks.

In the photos below, not only is the slime glowing as the kids play with it, the mixing bowls and stir sticks are also glowing from the residue left on them.

9. I gave them all ziplock bags so they could take their slime home, and then we played with the dry ice a little more for the last few minutes.

[*Note - Elmer's now makes glow-in-the-dark glue you could also use, but it was not readily available in larger quantities at a reasonable price when I first planned this program. Now it can be purchased in 9 oz bottles for about $9 at Wal-Mart. It works fine, but is much more opaque. It is very thick, so you may need to add another tablespoon of water to thin it down some. Also, the "natural" will glow much brighter than the colors. My method is more economical for large groups, or multiple programs.] 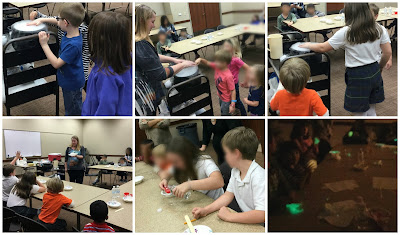 Overall, it went very well. One of the dry ice experiments I had planned did not work (concentrating the CO2 gas by forcing through a funnel and into a length of tubing to blow soap bubbles filled with fog), but I was skeptical of it to begin with. But the kids were plenty impressed by the rolling fog and giant bubble we made in the bowl, so it was fine. The massive amounts of fog produced when the hot water hits the dry ice always impresses everyone!

Everyone's slime came together pretty well, though for some reason it was stiffer than when I had made it at home, more putty-like. At home I produced a perfect batch that was really stretchy and truly slimy without being too sticky. But the kids were perfectly happy with it, and of course were amazed when they discovered it glowed in the dark!

We did run into one issue, though. About half of the kids chose to make theirs green, as I had, since that is the color of the ectoplasm left by Slimer in the Ghostbusters movies, but a couple chose yellow, one made blue, and two chose red. We discovered that the red coloring masked the glow, so that it only faintly glowed white instead of bright green.

Also, even with limiting the food coloring to 1 drop, the color was way too saturated, so next time I would add a squirt of Elmer's glitter glue, which has coloring and glitter added, to give just the right amount of more subtle color to make it more clear and slime-like. But I think the kids were all happy with their slime and everyone seemed to have a great time.
Posted by Jen at 12:24:00 PM