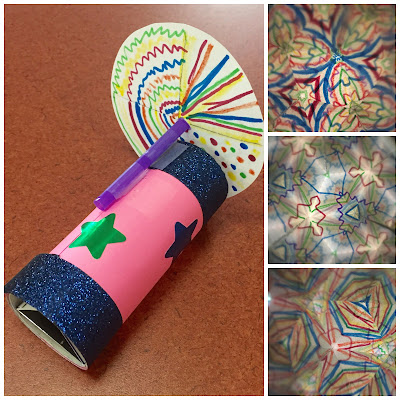 Today I did a relatively simple, low-cost STEAM program for a group of kids ranging in age from 6 to 12 years old, using mostly items you probably already have on hand, making homemade kaleidoscopes. I'll admit, when I first saw this on Buggy and Buddy I was skeptical, but it really does work surprisingly well, as you can see from the photos of my test model above. I did make a couple of changes, substituting a cheaper and more readily available material for the reflective surface, and covering with paper rather than painting.

I also started the program with some seriously cool demos also using mirrors (I'll describe these at the end of this post, be sure to check them out!). Click on any picture to see a larger image.

First, determine the size the reflective inserts need to be by measuring the length and diameter of the cardboard tubes you are using (any length tube can be used; just keep in mind the longer the tube, the more mirror paper used and the greater the expense). The reflective insert will be 3-sided, in the shape of a triangular prism. I'll save you the geometry involved in determining the length of each side of the triangle and tell you to just multiply the diameter of your tube by 0.866 😉.

I *highly* recommend cutting these out ahead of time so the expensive mirror paper doesn't get wasted. Though it will vary, our tubes were 100mm long and 42mm in diameter, so each face of our insert was 36mm X 98mm long (just to be sure no sharp points were sticking out). 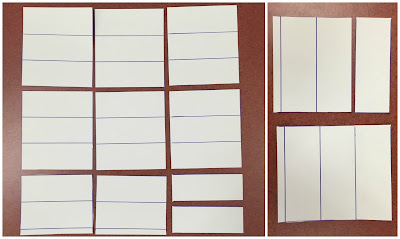 Our sheets were 12"x12" ($2 ea) and I got enough for 8 scopes out of each sheet, with only two thin strips left over. I measured and marked it off on the back with a ballpoint pen, with firm pressure to score the lines to be folded, then cut out all three sides together as one piece when possible. The remaining pieces had to be cut by two's, then simply taped together. (The extra sliver leftover on the end pieces can be left on to make a handy flap to fold over and tape, or trimmed off so they are all the same). Below is one of the precut pieces, mirrored side up, showing the visible lines where it will be folded (and the grid of our ceiling tiles!). 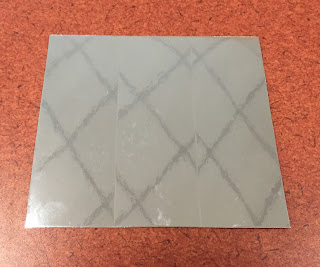 Next, pre-cut colored paper to the size needed to cover the tubes, and cut out circles from cardstock. We used the template Buggy and Buddy provided, which are about 3.75" in diameter, and found them to be just a bit too small, so I would recommend cutting 4" diameter circles. Have enough for each child to do 2 or 3 if they wish and time permits. 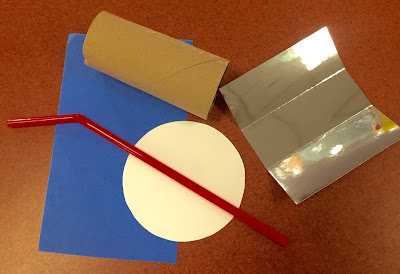 1. Give each child one cardboard tube, one mirrored piece (although the one pictured is pre-folded, let them do the folding), one piece of colored paper, one straw, two paper circles, scissors, and a pencil. Provide markers and assorted stickers as well.

2. Tell the kids to do any drawing they wish to do on the paper to decorate their kaleidoscopes first, reminding them there will be some overlap at the ends. Then when they are ready to apply it to the tube, to tape one end to the tube to secure, and also apply some glue (use gluesticks) to the underside as well, then roll up tightly, and secure the other end with tape. Stickers can be applied now if desired (this avoids waste by having stickers on the overlapping part).

3. Now, take the piece of mirror paper, and fold along the scored lines, MIRRORED SIDE IN, and tape together at the top. Carefully insert into cardboard tube; it should fit snugly. 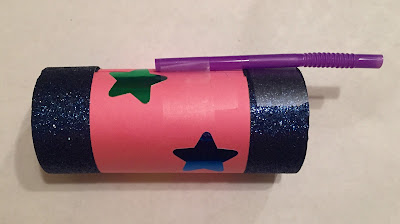 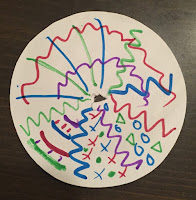 5. Make designs on the cardstock circles using markers (some kids also embellished with stickers). Experiment with different patterns, either dividing the circle into sections with different patterns, or doing the whole circle in the same pattern (you can utilize both sides, too). They really can't go wrong with this, the only caution I would give is to use at least two colors, the monochromatic patterns weren't as impressive. 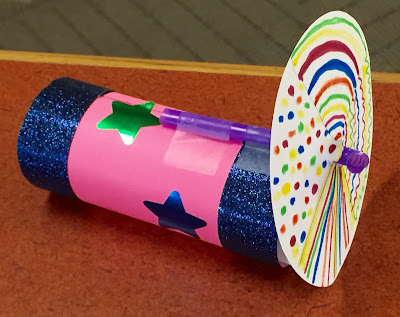 6. Poke a hole in the center of the circle with a pencil, and carefully thread it onto the flexible portion of the straw (The accordian folds help keep it in place; you could also put tape around the end of the straw, but then you could not interchange discs).

7. Stand in well-lit area, and hold kaleidoscope up to your eye with one hand, look through while turning the circle with the other.

Here are pictures I took looking through some of the kids' kaleidoscopes. They made some impressive and interesting patterns!

I love how everyone's turns out totally unique, and they all made some really cool patterns, regardless of whether they were the child who put lots of thought and meticulous drawing into it, or the child who rushed through with random scribbles and dots! This is a great activity for a fairly wide range of ages and abilities. The kids really seemed to enjoy making them, particularly once they got to see how neat their patterns were and liked looking at each others' as well. Only the youngest needed any assistance, and that was minor. Here are the kaleidoscopes themselves: 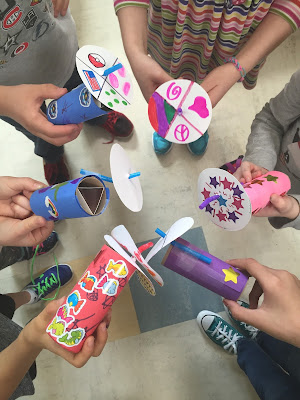 I was looking for something else to show using mirrors and reflection and found out about a couple of neat items: an infinity mirror, which creates an endless tunnel effect; and a mirascope, which uses two parabolic mirrors to project a 3D image. I found incredibly inexpensive versions on Amazon, and though I was a bit skeptical, they really worked!

Here is the mirascope I bought from Amazon for about $9 (though the price tends to fluctuate):

This thing is seriously cool! Look closely at the second and third pictures....would you believe me if I told you that frog and that ring are NOT really there, and neither is the mirror they appear to be sitting on? It is really just empty space over a hole, as the last picture shows! The mirascope is two curved pieces with an inner mirrored surface. When you put a small object inside, on the bottom, the reflections bounce around and end up projecting a 3D image above! It is so convincing, you cannot resist the urge to touch it, even when you KNOW it's not real. Kids and adults alike will be amazed!  To really see how well it works, check out this video, demonstrating several different objects:


The infinity mirror is from a DIY kit for kids that I found on Amazon for $12, though supplies are extremely limited. There are other tutorials online for making them, but I didn't have time to hunt down supplies, and I thought this would be much cheaper in the long run. It is basically a shadow box with a regular mirror on the bottom and a two-way mirror on top, with a string of LED lights around the perimeter in between.

When the LED lights are off and the room lights are on, it just looks like a mirror. But when the room lights are dimmed, and the LED lights are on, it looks like an endless tunnel. Unfortunately, the photograph really doesn't do it justice. I jokingly told the kids it looks like a mirror, but....is really a portal to another dimension! One precocious boy figured out how it worked right away, and explained that the reflections just keep bouncing back and forth between the mirrors, creating the effect, and we can see it because the top glass is only partially mirrored.

I explained that mirrors could be used to make these and other kinds of illusions and special effects, and that they are sometimes used in magic tricks and used to be used for special effects in television and movies before CGI, and are still used for live stage performances.

The kids really seemed to enjoy the program, and I came across a couple of other special effects using mirrors I'd like to incorporate in the future. The demos did add about $25 additional expense, but can be used again. I bought them personally, because I wanted to be able to keep them myself. Excluding the demonstration items, this is still a great low-cost STEAM program that uses readily available materials, most you probably already have on hand.
Posted by Jen at 9:26:00 PM