A Most Egg-cellent Storytime


I was trying to decide what to do for my Friday storytime, as I didn't want to necessarily do the same theme that we had finished with the Storytime-To-Go program ("Birds"), and a co-worker had mentioned doing an "Egg" themed storytime. I thought that would be a good theme since it was just after Easter and I knew I had some books from the "Bird" kit to fall back on if I needed to, but I decided to try to find different books that would help show that other animals besides birds lay eggs.

We started with our welcome song, and talked about eggs a little bit, but then they got side-tracked by talking about Easter eggs. I tried to get them to think about what other animals besides chickens and other birds lay eggs, but they just couldn't grasp the question and kept talking about either Easter eggs or chickens, so I just moved on to our story song. 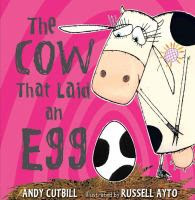 For our first story I read The Cow That Laid An Egg by Andy Cutbill and Russell Ayto, which is a cute story about a cow named Marjorie who is sad because she doesn't have any special talent. Her friends the chickens concoct a plan to make Marjorie feel special. The next morning when everyone wakes up, Marjorie discovers a black-and-white egg in her bed!

This is a funny story that doesn't end quite the way the audience expects, with whimsical, cartoonish illustrations.

Of course we cannot talk about chickens and eggs without singing Laurie Berkner's "I Know A Chicken", and we have to have shaky eggs!

Everyone loves the song, and it elicits a lot of audience participation. 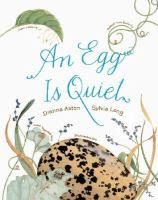 I followed that up with a non-fiction book, An Egg Is Quiet by Diana Aston and Sylvia Long, to show all different kinds of eggs and various characteristics. Most were from birds, but it also shows a dogfish shark egg, various insect eggs, frog eggs, iguana, fish, and turtle eggs. I really like how it showed the range of sizes, shapes, colors, markings, and that it made a point of explaining bird eggs have hard shells, while reptile eggs have softer, learthery coverings, and amphibian eggs are "gooey".

This is a really nice book; my only complaint is that I wish it showed a few less bird eggs and a few more "other animals" eggs, and had them grouped by animal type on the 2-page spreads so they would be easier to differentiate.

I followed this up with a really cute flannel board activity inspired by one I saw at "Jen In The Library", that she had originally found in a book called Preschool Favorites by Diane Briggs. I made a few changes due to time constraints and personal preference. First, I knew I didn't have time to make 10 since I was doing it somewhat last minute, so I reduced it to 5. Second, I didn't have the pattern book mentioned, nor time to make patterns, so I had to do the very "quick-and-dirty" freehand method.

I'm not much of an artist, so they are a bit crude and some are too small, but not terrible considering how quickly I made them while working the service desk (I plan on remaking them later, and adding more). I also chose animals based on what I wanted to use, and re-wrote the rhyme. I then decided rather than simply removing the egg to reveal the animal behind, I would cut the eggs in half and remove the tops, to really make it look like they were hatching. And then I decided they would look so much cuter in a nest than just stuck on the board, so I very quickly freehanded a nest, cutting out a slit to tuck the eggs into. 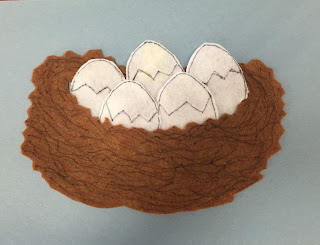 Here are five little eggs, and what do I see?
They're about to crack open!
What's inside? I'll wait and see. 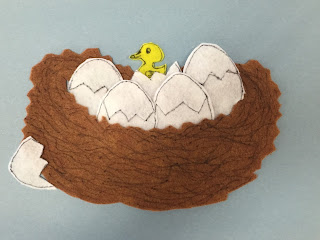 The first egg cracks open, and what do I see?
A fuzzy, yellow duckling looking at me! 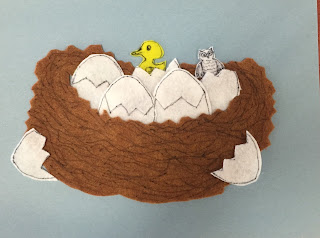 The second egg cracks open, and what do I see?
A fluffy, white owl looking at me! 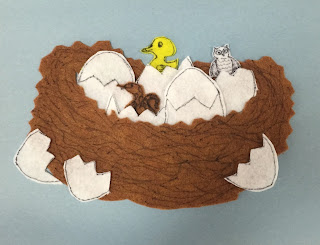 The third egg cracks open, and what do I see?
A scaly, brown snake looking at me! 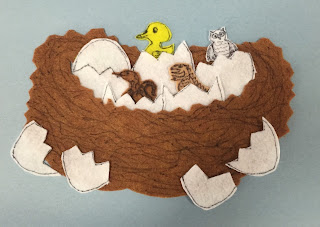 The fourth egg cracks open, and what do I see?
A fierce, little dinosaur looking at me. 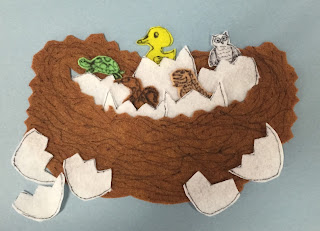 The fifth egg cracks open, and what do I see?
A little, green turtle looking at me!

And that brought us to our final book, The Odd Egg by Emily Gravett, which is a story about a poor Duck, who wishes he had an egg like all the other birds. Then, he finds one a most unusual egg. It is huge, and covered with green spots, and Duck thinks it's the most beautiful egg in the world; the other birds disagree. One by one the other birds' eggs hatch, revealing their babies. Will Duck's egg ever hatch?

This is a cute story with a surprise ending, and I really like the way the pages are cut to reveal each hatchline one-by-one. But while the illustrations are cute, I hate that they are so small and so pale! It makes this book difficult to use as a group read-aloud, unless you have a very small group, as the pictures are very hard to see and no one ever recognizes the parrot as a parrot without the proper vibrant coloring.

We finished up with our closing song and stickers.

How It Went
Today was a little more difficult than usual as the kids were very restless and talkative, and had a very hard time settling down. We had to stop and start our "story song" over twice because most were not paying attention or participating, and one little boy who has decided to be the class clown kept singing nonsense words and doing incorrect actions despite after being asked to stop and do it right twice by the teachers. So I had to stop the song and firmly tell him that I wanted him to stop what he was doing and sing the song right, that it wasn't funny; it was just rude. We started over and after that he did a great job. I still had to periodically stop and redirect their attention throughout the storytime.

This class is usually not like that, and are typcially mostly good listeners. I think it must've been a combination of Spring fever and that it had been a month since I'd been there last because they were closed for Good Friday. They really liked The Cow That Laid An Egg, though I think it confused one little boy who now thinks cows do lay eggs! And of course they loved doing "I Know A Chicken". Some of them had a hard time accepting that other animals besides birds lay eggs, especially when I showed them the dogfish shark egg case. They just could not believe that was an egg. I think they were amazed at the variety of sizes, colors, and shapes of eggs, since most are just familiar with white chicken eggs.

Even though my little flannel hatchlings were very crude, they guessed them all correctly, though sometimes it took them a minute and maybe a hint. The snake was the one they had the most trouble with, but I think they enjoyed it and thought it was cute.

I'm not sure if they all really got the point that birds are not the only ones that lay eggs, but they still had some good stories and activities. I had intended on bringing some photographs of other animals and their eggs, but sadly, when I went to print them out this morning my printer was out of ink.