This week I finished up a two-week rotation on "Birds" with the Storytime-To-Go program. I did this same theme last spring, and since I used mostly the same books and the same activities, I'm just going to link to the previous "Bird" post for the descriptions of all those and just focus on the two new books I used this time, how it went, and some very funny comments it prompted!

Sylvie by Jennifer Sattler is actually not a new book (2009), but it was new to me. Our system only has one copy, which was at a different branch, so I had never seen it before. My manager found it when she had been asked to do a bird-themed storytime by a teacher who specifically requested something on flamingos, and suggested it to me.

The story starts with little Sylvie asking her mother why they were all pink. Her mother explains that it is because of the shrimp that they eat [which is true]. Sylvie wonders what would happen if she ate something something different and experiments to find out, with results that are very colorful and sometimes funny. But in the end she doesn't feel like herself and decides to go back to eating shrimp....but not quite exclusively.

This is a cute story with bright illustrations, and I really liked that it was based on the surprising truth about where flamingos get their pink coloring, which not many people know. I have always mentioned this when we would have a flamingo show up in our stories, but I like having a story that incorporates this fact (if they don't have their normal diet, they will be white or pale grey). And we talked about how funny it would be if people turned different colors based on what they had been eating, and how their parents would know if they had been sneaking treats if we did. Another thing I like to point out is in at least one picture, the flamingo's legs look like the number "4" (which is often the case when flamingos are pictured, I've noticed).

By pure coincidence, the first class I pulled this book out to read to had a little girl name Sylvia in it. And you wouldn't believe what she was wearing.....a t-shirt with a big, bright flamingo on it! She thought it was so cool that she matched the book, and her teacher took a picture of the book to show her mom. I wish I could have taken a picture of her holding the book, but alas, one of the downsides of outreach is that we can't take photos of the kids since the parents are not present to consent. 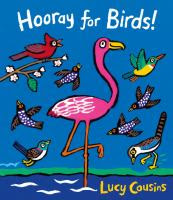 Hooray for Birds! by Lucy Cousins is a brand-new book that we just got in a couple of days before I started this theme, which was perfect timing. I was expecting it to be similar to Hooray for Fish!, which is okay, but not particularly exciting. I do really like her illustration style, with the simple illustrations, saturated colors, and heavy black outlines, which I think is great for keeping younger kids focused.

But when I opened it up, I found it was so much more than I had expected. It not only shows all different kinds of birds, but prompts the reader or audience to imitate them, so it's very interactive and a great way to incorporate some fun movements! They get to say "cock-a-doodle-doo", flap their wings, hop, stand on one leg, waddle like a penguin, and more! The kids really enjoyed it, and I highly recommend it. And coincidentally, it also features a flamingo on the cover, whose legs just happen to make the number 4! 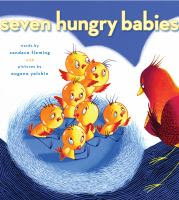 Seven Hungry Babies by Candace Fleming and Eugene Yelchin is a book I've used before, but I wanted to show it since it is a favorite, and it prompted a very surprising discussion and funny comments.

This is a story about a mother bird working hard to feed her seven babies. By the time she finally gets the last one fed and settles down to rest, they wake up crying again! But this time Daddy has to take a turn.

I went on to mention that's how it really is with new babies; as soon as you get them fed, changed, and back to sleep and try to get something done or take a nap, they are awake and ready to eat again. Some of the kids have babies at home and could relate, and one boy piped up in a knowing voice, saying "Yeah, they can be really annoying..."

But in another class, the kids ended up having quite a discussion while I was selecting the next book to read:

Child #1: "Yeah, then it's my Daddy's turn to help. But he has to feed my baby sister with a bottle."

Child #2: "Yeah, because he doesn't have breasts."

Now some people might have gotten a bit flustered or uncomfortable with this, but I found it amusing and sweet, and the teacher was fine with it. The kids weren't trying to be funny or shocking, they were simply having a sincere discussion about lactation amongst themselves, and I didn't intercede since we were at a transition point while I decided which book to read next anyway. I should also note that there were both boys and girls involved in the discussion, and I think it's a great thing that more boys are growing up knowing what breasts are *really* for!

How It Went Overall
This always seems to be a popular theme. The kids enjoy identifiying different birds, and hearing the different calls, and they are always completely fascinated by the nest we have with the egg that never hatched. Some of them are convinced that egg will hatch eventually, while another child was so empathetic with the poor baby that didn't make it I was afraid he was going to start crying! But, thankfully he didn't. I never say that the baby died, I tell them it didn't have a baby grow in it [and it could be either way; an unfertilized egg or an embryo that didn't make it].

In addition to the books above, Peck, Peck, Peck was a big hit once again, as was Owl Babies, which is a favorite of mine as well. The kids just love joining little Bill whining, "I want my Mommy!". They also liked The Odd Egg, Roly-Poly Egg, and The Pigeon Needs A Bath. Night Owl is a really good one for younger kids since it is shorter and has the different sounds to guess.