A Poem for Peter - Review 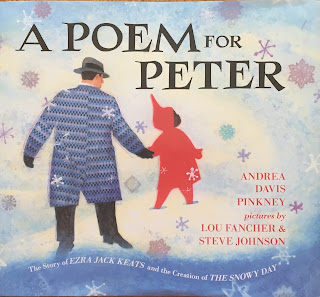 Summary
A Poem for Peter is a picture book biography of both children's author-illustrator Ezra Jack Keats and the character of Peter that he first created in his Caldecott-winning debut as a solo author-illustrator, A Snowy Day, published in 1962.

The book is written in a style of verse known as a bio-poem or tapestry narrative, which, according to the author, is intended to echo the layers Keats employed in his rich, collage style of illustration. Andrea Davis Pinkney is an accomplished author in her own right, and is also the daughter-in-law of well-known children's author/illustrator Jerry Pinkney.

Review
I'm a little late to the party on this one. It came out right before the holidays, which is already an incredibly busy stressful time, made even more so now that I'm in graduate school as well as working and being a mom. I thought I had put in on hold at the library, and then forgot about for a while. When I realized it had been awhile and I had never gotten it, I discovered that either I never put the hold on it, there had been a computer glitch that kept it from going through, or it had been accidentally cancelled. By that time, the peak demand was over, and it was simply sitting on the shelf waiting for me to find it.

I really didn't know exactly what this book was, just that it was written by Jerry Pinkney's daughter-in-law and had some connection to The Snowy Day. If you follow my blog, you already know I absolutely love The Snowy Day, partly because it's nostaligic as it came out just a few years before I was born and was one of my first books; I still have my 50 year old childhood copy, which is in suprisingly good shape after going through me, my three siblings, and my daughter, as well as the 50th Anniversary edition. I also just love the simplicity of it, the simple text, and the charming illustrations that are rich yet simple at the same time. It perfectly captures the quiet beauty and solitude of exploring outside after a fresh snow.

Even though I didn't know what to expect of A Poem for Peter, it did not disappoint! It is a wonderful tribute to Ezra Jack Keats, describing his family and childhood, how his career as an artist developed and followed several twists and turns, eventually leading to his career as a children's author and illustrator, and how he came to develop the character of Peter. I knew a little bit about this part, but not much of the rest of Keat's life. While I've always loved A Snowy Day, I never fully appreciated how truly ground-breaking it was until recently.

A Poem for Peter is an absolutely beautiful book in every way! I am not a person who has an appreciation for poetry, but I loved the way Andrea Davis Pinkney chose to tell the story in verse, and couldn't imagine it any other way. The book is illustrated with collages, using Keats' own artwork from The Snowy Day and other books of his, so Keats' style and spirit permeate the book. The lyrical verse and the illustrations capture the same magic of A Snowy Day, and I was so moved and impressed by it, I ordered my own personal copy as soon as I finished it!

I often cry or tear up when I read novels, but I don't think I've ever cried over a picture book. However, after reading the whole story, told in such beautiful, lyrical verse, I must confess I almost teared up when I got to this touching image of Ezra Jack Keats walking hand-in-hand with Peter after knowing the journey that brought them together and having a better appreciation for the significance of that first book, The Snowy Day. I don't know how this book hasn't won any awards.
Posted by Jen at 1:35:00 PM